Is Hawking radiation really the same as Unruh radiation?

I read that Hawking radiation is the same as Unruh radiation. However, there seems to be a paradox here.

If you have an extreme black hole (say with maximum charge), then it has temperature 0 and doesn't radiate. However, it seems to me that a neutral (uncharged) observer hovering above the horizon should still see Unruh radiation because he is undergoing a high acceleration.

Does this show that Hawking radiation and Unruh radiation are really different things? If not, how does one resolve this discrepancy?

And either way, doesn't the observer hovering over the horizon see the Unruh radiation escaping from the black hole? If he sees this, why is he wrong?

Now, the near-horizon metric of an extremal black hole is $AdS_2\times S^2$ while for a non-extremal one, the $AdS_2$ is replaced by the Rindler space.

This $AdS_2$ (two-dimensional anti de Sitter space) has consequences. First, in the static coordinates, the proper distance of any observer from the event horizon diverges. On the Wikipedia page I linked to, the formula $$ ds^2=-\frac{r^2}{M^2}\,dt^2+\frac{M^2}{r^2}\,dr^2+M^2\,\big(d\theta^2+\sin^2\theta\,d\phi^2 \big)$$ implies that near $r=0$ (which corresponded to the horizon $r=M=Q$ in the original coordinates), $s =\int ds$ is proportional to the integral of $M/r$, and therefore logarithmically diverges. 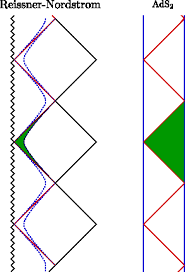 The Poincaré patch covers the green portion of the "global $AdS_2$" on the right part of the picture above. The observer sitting at the horizon however moves along the upper 45° tilted boundary of the green triangle and his trajectory inevitably is a geodesic. So he experiences no local acceleration – and no Unruh radiation. This is actually related to the fact that the near-horizon metric $AdS_2\times S^2$ with the appropriate electric or magnetic flux is a solution to Einstein's equations by itself – while the non-extremal near-horizon metric isn't a solution by itself.

Because the local curvature of these trajectories vanishes, the Unruh temperature vanishes, as also expected from the fact that when the "two horizons" coincide, the gravitational acceleration at the horizon vanishes.

So because the acceleration and temperature near this horizon is zero, there is no Unruh or Hawking radiation seen by this observer.

In the non-extremal case, there is a radiation that the observer keeping himself a bit above the horizon sees. Locally, it may be interpreted as the Unruh radiation, and the Unruh radiation could be undone in the flat space by using the non-accelerating reference frame. However, in a finite non-extremal black hole spacetime, things are different. The static Schwarzschild coordinates behave at $r=\infty$ as non-accelerating coordinate in the Minkowski space, but near $r=r_0$, they behave as the locally accelerating frame where the Unruh radiation exists. With the Schwarzschild choice of the time and the corresponding energy, we know that the fields aren't in the ground state of this Schwarzschild $H$ near $r=r_0$ because there's the Unruh radiation. Because $H$ is a symmetry of the background, it must be true after some time, too. At $r\to\infty$, these excitations must be still there, even though the curvature may already be neglected at $r\to\infty$.

So that's why the Unruh radiation is seen as a real, Hawking radiation by the observer at infinity (where the attraction by the black hole becomes negligible).

Since the acceleration of a static Unruh-deWitt detector is finite rather than infinite as the horizon of an extremal black hole is approached, the response of such a detector depends not only on the UV structure of the vacuum state (which in any nonsingular state is always the same as in the Minkowski vacuum) but on IR aspects of the state. There can be more than one state that suggests itself for consideration. It might be natural to consider the Hartle-Hawking state on a charged black hole background, in the extremal limit. I don't know what what would yield for the detector response, but perhaps some of the perspective in this old paper might be helpful here (and perhaps not, since I think the states considered there are "static vacua"). On the other hand, maybe this falls outside the original question, which was about the relation (or not) to Hawking radiation in this case. I'd say there's no clear relation, because the Hawking radiation is determined by the UV structure of the state at the horizon, and that static Unruh effect is determined by something else in this case.

The problem with taking such parametric limits of spacetimes are extremely tricky, and presumably responsible for the 'order of limits' issue here. In essence, there is no unique way to identify 'points' of manifolds with metrics differing in value of some parameter; eg, mass M in Schwarzschild. An old paper by Geroch, "Limits of spacetimes" discusses precisely the pitfalls of being careless in this regards, and the case of extremal limits using Geroch's ideas can be found in the more recent work by Bengtsson, Holst, Jakobsson "Classics Illustrated: Limits of Spacetimes".

Not the answer you're looking for? Browse other questions tagged black-holes hawking-radiation unruh-effect or ask your own question.

11
Intensity of Hawking radiation for different observers relative to a black hole
5
Direction of Unruh radiation
3
Flux and radiation pressure from Unruh radiation?
2
Can an Observer Distinguish between Unruh Effect and Hawking Radiation by Measuring Temperature?
2
Ways to derive black-body radiation in Unruh effect