What proportion of a star's hydrogen is consumed in its life?

I've heard in a lecture that a star like the sun would burn 3% of its Hydrogen before expiring.

I would have thought it would be much more.

It is much more. During its core-burning phase, the Sun will burn about 10-15% of its hydrogen supply. The gas is about 70% hydrogen by mass, so that translates into about $0.07$ to $0.1\,M_\odot$ of hydrogen burned. The exhausted core then contracts while hydrogen is burned in a shell that gradually moves outwards (in terms of mass). Helium ignition starts once the exhausted core is about $0.5\,M_\odot$ (so $0.35\,M_\odot$ has been burned). The burning shell will continue to burn some material but not a great deal. Off-hand, I think the Sun is expected to leave a $0.6\,M_\odot$ CO white-dwarf as a remnant, which implies that it burns about 60% of its available hydrogen or $0.42\,M_\odot$ of hydrogen. (It is possibly slightly more because some of the hydrogen in the envelope will be mixed into the burning region and transformed into helium.)

It's difficult to say how much hydrogen a star burns in general because stars lead different lives depending how massive they are. For example, up to about $2\,M_\odot$, the H-exhausted core always grows to about $0.5\,M_\odot$ before He-burning starts. Larger stars don't have to wait, so the core masses will be larger in absolute terms but smaller as a fraction of the total initial mass. i.e. a $2\,M_\odot$ star will ignite He in a $0.5\,M_\odot$ core, but a $5\,M_\odot$ star might do so in a $1\,M_\odot$ core (rather than $1.25\,M_\odot$ ).

For high-mass stars ($>10 M_\odot$) I offer this plot from a talk by Marco Limongi. The He-core mass tells you roughly the mass co-ordinate of the region that burned hydrogen into helium. Since the initial composition is uniform, that's roughly the fraction of the hydrogen that is burned. So if the He core mass is $5\,M_\odot$ in a $20\,M_\odot$ star, then roughly 25% of the hydrogen is burned. This statement is actually complicated by the fact that some of the unburnt material in the envelope will be mixed into the burning shell, but its gives a rough idea. 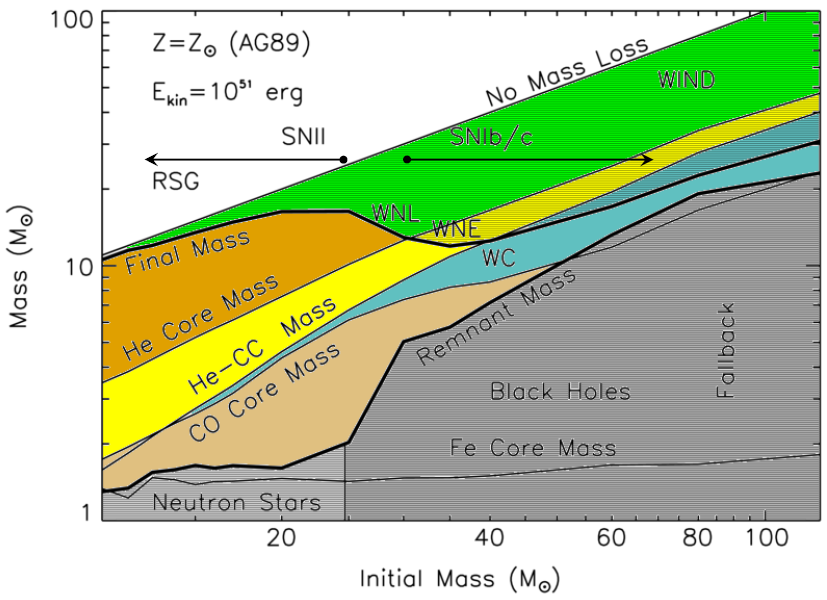 Not the answer you're looking for? Browse other questions tagged astrophysics sun stellar-physics or ask your own question.

8
What causes the dimensions of a star increase when its hydrogen fuel is exhausted?
3
Sun energy production as a function of depth
0
Planetary nebulae, thermal pulses and mass loss
5
Why are stellar clusters useful for developing stellar evolution models?
12
Did the Sun form around a solid core?
62
Why is the Sun almost perfectly spherical?
30
Why is the Sun called an "average star"?
18
Why is the Sun made of light elements only?
0
Does the Sun have enough gravitation to bind its hydrogen/helium plasma?