My question is relatively straightforward: Do we know if satellite/ dwarf galaxies contain the same proportion of dark matter to ordinary matter as "regular" sized galaxies?

The Milky Way, for instance, is estimated to be surrounded by about 50 such dwarf/satellites, most of them relatively tiny, weighing roughly 10,000 times less than the Milky Way, with some containing only a few thousand stars. 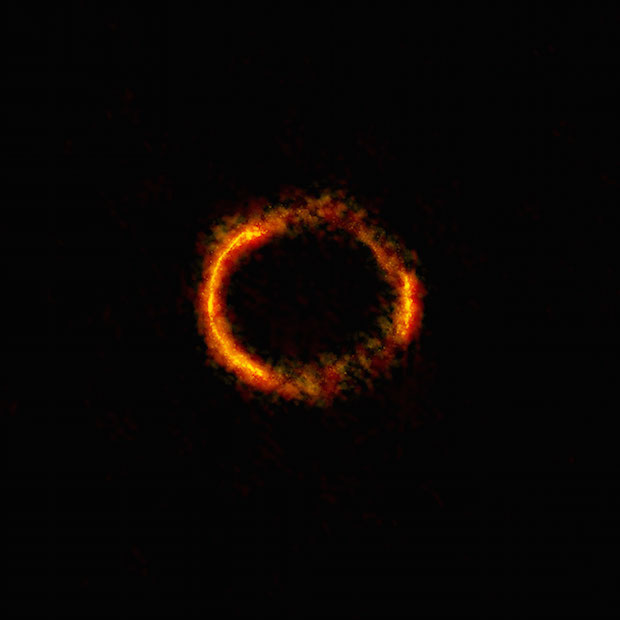 Seen by the Atacama Large Millimetre/sub-millimetre Array (ALMA), the Einstein Ring shows the smeared light of a distant star-forming galaxy that existed at a time when the Universe was just two billion years old. Its light is being magnified and bent into a ring by a huge foreground galaxy four billion light years away from us, whose mass is bending space and hence the path that the light of the lensed star-forming galaxy is taking to reach us.

I appreciate that satellite galaxies are harder to discover in the first place, and that probably the techniques to determine the amount of dark matter, such as gravitional lensing, are much more difficult to carry out.

Good numbers for this have only been coming out for a decade or so, so its a relatively new topic. There does seem to be a strong tendency for dwarf and satellite galaxies to have much higher mass-to-light ratios, and correspondingly smaller baryon-to-DM ratios. See, for example, Stringer+2009, Strigari+2008.

These observations are backed up by simulations which show that lower total mass galaxies have larger portions of baryons blown off by feedback processes from star formation, and supernovae. Lower total mass galaxies tend to have mass fractions of baryons much smaller than the cosmological average ($\sim 15\%$). Once you get to larger mass (Milky-Way like, $L_\star$-ish) galaxies, the gravity is sufficient to keep most of the material there, despite feedback --- bringing the baryon fraction closer to average. In much higher mass galaxies---the most massive ellipticals---it seems that the fraction drops again, likely due to AGN feedback processes --- but this is a very active an uncertain area of research.

In addition to being lower mass and thus better stripped by stellar feedback, satellite galaxies can also be stripped by interactions (tidal and dynamical) with the central/host galaxy.

9
How does dark matter halo outside a galaxy help to explain galaxy rotation curve?
12
Does the Milky Way have dark matter satellite galaxies?
4
What is the average mass of galaxies according to Hubble Deep and Ultra Deep field observations?
3
Questions about shape of dark matter orbits in spiral galaxies
4
What sets the lower mass limit for dark matter dominated structures?
5
Does Dark Matter Exert The Same Gravitational Force As Ordinary Matter?
15
Is matter - dark matter symmetry possible?
3
black dwarf stars and dark matter
1
Is a galaxy made up of dark matter really a galaxy?