What's the origin of the flattened X that appears when of a small (but powerfull enough) light is reflected in our non-powered TV screen?

The reflection of a small light (but with enough power) on our TV shows four emerging rays. The rays vary periodically in space and have a repeating pattern of the colors of the rainbow. The further the flame is from the TV the greater the distance between the periodic lights in the "rays". Sounds reasonable. This is the picture of the effect: 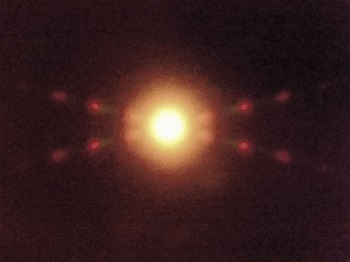 No matter how far you put the candle, the angle between the two lines stays the same. The color green is very faint in the picture but was clearly visible on the TV screen. The distance between successive red/green spots was getting smaller if the distance between your eye and the screen was getting smaller. Sounds reasonable. No matter how the light was positioned relative to the TV, the same pattern emerged.

I added a close-up picture of the working TV on which you can see what form the light-emitting pixels have: 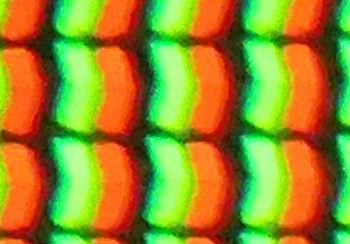 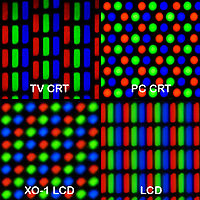 Surely not a flattened X! But to stay close to the question, what if the angle between the rectangular pieces of the pixels would be 180 degrees (so they become one rectangular) and positioned like in the lower right part of the above image? Would the X-form be stretched into a horizontal line (let's suppose all pixels, when the TV is off, reflect light equally well for what follows), with the colors of the rainbow repeating? In this case, a diffraction pattern is produced because of the different wavelengths of the colors in the rainbow. That is quite clear. All the red pixels reflect in such a way a light-dark pattern is found in the horizontal (squeezed X) line on the non-powered TV when we shine a light on it.

The fourth and fifth pictures I made by using a white and red LED (which shows the periodic Nature most clearly, and even red concentric rings), and in the sixth picture, I added some information on how I made the picture.

The last picture shows (somewhat fuzzy) the rectangular pixels and their configuration on my lap-top screen. It is the same forms of dots and they have the same configurations as in the pixels shown down left of the picture with four different forms and configurations. When I shine a light on my non-powered lap-top screen, I can discover no X-forms. It could be that the pixels don't reflect light.

But the final question: Are the same angles found in the pixels, (the big angle between the two rectangles) as in the big angle of the X correlated? If so, how? 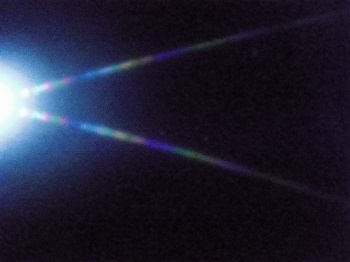 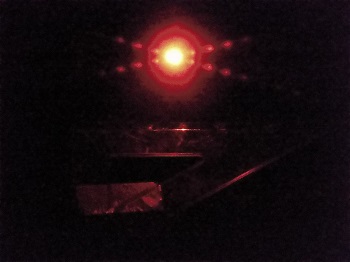 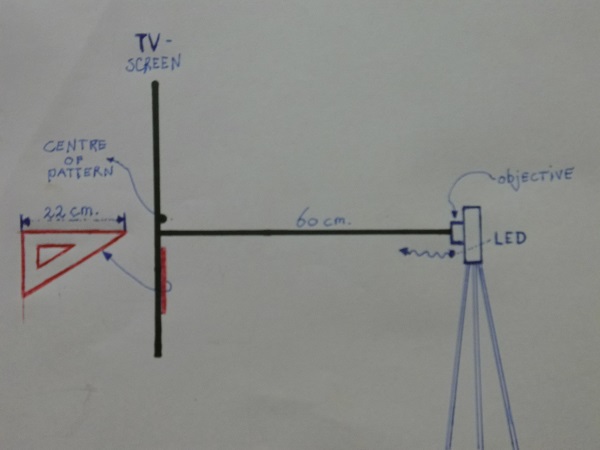 I added this close-up picture of my laptop screen: 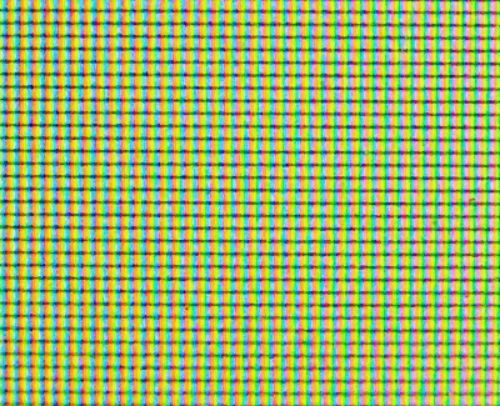 It's not that good visible, but the pixels are rectangular shaped (in vertical position). They are much smaller than the pixels on my big TV-screen, which I almost can see with the naked eye (once you know the shape after taking the close-up picture, which can't be said of the pixels of my laptop's screen). The effect isn't visible on my (power off) laptop screen, maybe because of the smallness of the pixels. The effect is (as I said ) color-dependent (with a red beam of light only a red X-form, periodically bright and dark is seen) and orientation independent (no matter how I point the light beam the same X appears over and over again). Nevertheless, I don't know if the pixels on both screens are the same (though it appears so).

visible-light everyday-life diffraction light-emitting-diodes
Share
Improve this question
edited May 16, 2020 at 15:19
Deschele Schilder
asked May 30, 2016 at 18:57

It looks like a diffraction pattern from the pixels of the screen. In a different SE question, the pattern was four horizontal and vertical "rays" consisting of finely spaced peaks, rather than the wide spacing here and the angles that differ from 90 degrees.

If you measure the apparent angle between the first diffraction peaks (the ones at the edge of the halo) and the central spot, you can relate that to the wavelength (say, 600 nm) and the dot pitch of the tv screen. The ratio of distances screen-eye versus screen-candle also matters; the analysis is easier if this ratio is much smaller than one.

Regarding the angle between the rays: I suspect that your screen does not have rectangular pixels, but pixels arranged in some kind of staggered arrangement. However, I can't guess the exact pixel arrangement from the diffraction pattern. It could also be that you took the photo from an angle. Maybe you could post a picture of the TV pixels in close-up (when the TV is on) and a sketch of the relative locations of camera, candle, screen, and apparent diffraction spots.

I did a 2D Fourier transform on the a pattern that looks roughly like your pixels: left image. (The fade-out towards the edges is a windowing function). The Fourier transform, which should look like your diffraction pattern, is on the right (amplitudes plotted, not intensities). Indeed, you see the flattened "X" shape appear, but also a vertical row of diffraction spots. I'm not sure, though, why the diffracted "X" is so pronounced in your case, with just two tilted rows of dots, rather than lots of dots that happen to be a bit brighter near the "X". 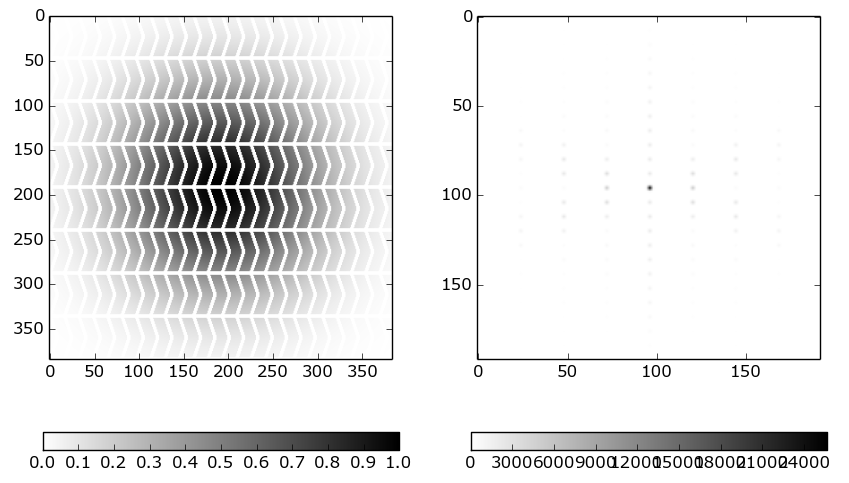 Not the answer you're looking for? Browse other questions tagged visible-light everyday-life diffraction light-emitting-diodes or ask your own question.

1
Patterns in diffraction gratings
20
What are these rays that appear in photograph of sun?
29
Why does light reflected from an LED TV screen make a sharp X pattern?
6
Diffraction Pattern on LCD Screen

11
Colors from a computer vs. colors from visible spectrum of sunlight
9
What are colors?
0
Is purple in visible light?
7
Why do we see brown light?
4
Physics of color: why do visible colors absorb all colors except the color itself?
3
visible light spectrum
1
Reflection of a mirror concerning angle and wavelength
3
How pure are the colors of the rainbow?
0
How do LED screens emit light?