How does electrical energy develop by concentrating ions on one side of a biomembrane?

In biology there is a topic called oxidative phosphorylation.

In the first step of this process substrates such as isocitrate is oxidised and the electrons are transferred to coenzymes NAD+ or FAD to form NADH or FADH2. These high-energy electrons are then transferred through a series of electron carriers of electron transport chain. The energy released is used to translocate protons from the matrix to intermembrane space establishing a proton electrochemical gradient across the inner mitochondrial membrane.

In the next step the protons move down the electrochemical gradient, through an ATP-synthesising complex. The energy stored in the gradient is used to synthesis ATP. 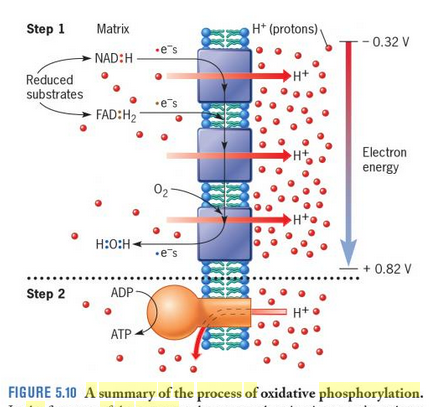 How is electrical energy developed by concentrating ions on one side of a biomembrane?

biophysics biology
Share
Improve this question
asked May 30 '16 at 12:31

This may be slightly more technical then you are after but may be of use to others.

There are two things going on here.

So since I have mentioned it let me explain what 'free energy' is. Free energy is energy with the ability to do work. We can quantify this into something called the proton motive force. This is the free energy per charge to take one proton from outside of the cell to the inside. It takes the form: $$PMF=V+\frac{G}{e}$$ $$=\frac{en}{C}+\frac{k_BT}{e} \ln\left( \frac{C_{in}}{C_{out}} \right)$$ So if I were to take one proton across the membrane I would lose an amount of free energy equal to $e \times PMF$. And hence lose this amount of useful energy.

As you can see the proton motive force consists of a part due to the electrostatic attractions between separated molecules (in the form of a capacitor) and part due to the entropy change associated with moving ions.

Let's say we already have an assembly of 3 static charges, with initial energy $E_0$. 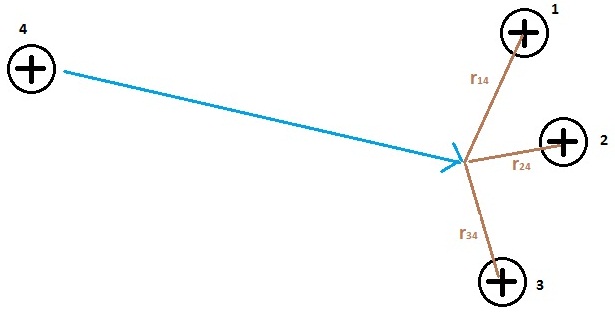 Not the answer you're looking for? Browse other questions tagged biophysics biology or ask your own question.

7
How can tunneling be one-way?
2
How much energy (eV) is in a mosquito's wing beat?
1
How much energy does it take to simply run forward?
1
How should one lift a heavy object?