Is this a valid way for deriving the ODE for a lattice vibration of a one dimensional crystal? 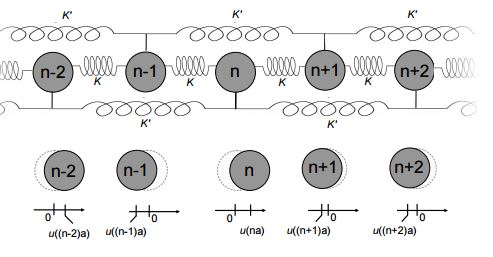 I want to derive a differential equation that describes the forces acting on the $n$-th atom in the lattice. Each atom is coupled to its neighbour ($n+1,n-1)$ by a spring with constant $K$ and to its neighbours neighbour ($n+2,n-2$)by a spring with constant $K'$. From Ashcrof/Mermin I know that the equation of motion for three atoms without interaction between $n$ and the $(n+2,n-2)$ atoms is:

where $u(na)$ is the displacement along the line from it's equilibrium position, of the ion that oscilltes about $na$.

Now I want to expand this and consider the interaction with the $(n-2,n+2)$ atoms. This is what I have tried:

The force directly acting on particle $s$ in the harmonic approximation is proportional to the displacement from equilibrium, $u$:

So far so good. But as Aschroft-Mermin correctly points out, particle $s$ is actually coupled to the second-, third-, foruth-... nearest neighbours. So we should actually write, as you correctly concluded in the case of second nearest-neighbours,

Not the answer you're looking for? Browse other questions tagged solid-state-physics harmonic-oscillator coupled-oscillators or ask your own question.