What moves the charges between capacitors?

1)When only one plate of each capacitor is connected through wire . For this case, I have read that charges will not flow between the connected plates but I want to know why ?. I have read explanations like the two plates will come to the same potential (but why?). I haven't found the reasoning for it .

I want to know what force causes the electrons to move and what is the fundamental physical difference between these two cases .I want to know how do the two capacitors know whether both their plates are connected or not . 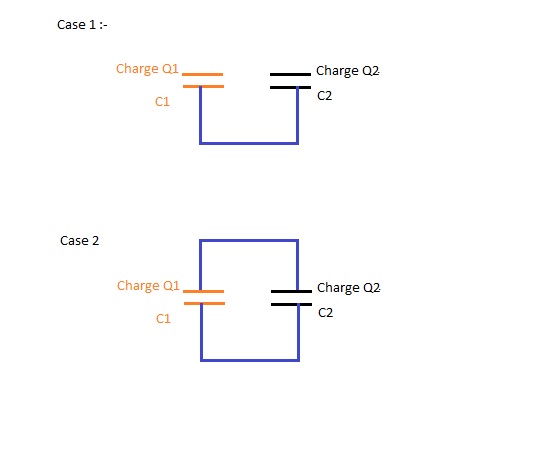 Here is another attempt at an answer, from a slightly different angle. It is less sophisticated and may add insight.

A potential difference exists between the bottom plates of the two capacitors. It has not been specified what this is. The result is that an infinitesimal charge is held by the "parasitic" capacitance between the two bottom plates.

When the bottom plates are connected together, this parasitic capacitance is short-circuited, and enough current flows to discharge the billionth or so of a coulomb that was stored by that capacitance. This is not zero, and to that extent what you have read is wrong - unless the potential of the two bottom plates is identical, and no mechanism has been specified that could ensure this.

I don't think that much needs to be said about Case 2, because I think your puzzlement was about Case 1. In Case 2 the much larger charges $Q_1$ and $Q_2$ are involved, and so current obviously does flow.

The trick to this question is that neither situation can exist in reality. There are no perfect insulators (required to isolate the plates in part 1), and no perfect conductors (required for the wires). Both of these situations are ideal cases that exist at the end of an extrapolation of what can happen in reality.

To bring this situation back to reality, let's start with case2, but add a resistor to the top wire and bottom wire. In reality, all wires have a little resistance, so lets make those resistances very very small (fractions of an ohm).

We now have a circuit, with two capacitors, charged. From the capacitor equation, $C=\frac{Q}{V}$, we can see that the two capacitors will each have a voltage differential across them. In the trivial case, where that voltage is the same for both capacitors, no current will flow. However, in all other cases, current will flow, which can be seen by either assigning a ground voltage anywhere on the circuit and doing nodal analysis, or by doing a mesh analysis with the one loop.

In case 1, we actually have a really really really large resistor on the top. It's trivial to see that such a resistor would make current move through the circuit very very slowly. If the resistor was infinite (perfectly isolating the plates), no current would flow at all. Remember, current is the motion of charges -- no charges can move without a current.

If you prefer to think in mathematical terms, for case 1 assign a "ground" voltage on the bottom wire. Using $C=\frac{Q}{V}$ we can see that, for a fixed capacitance and a fixed charge, the voltage across the capacitor is fixed. Thus, we can assign a voltage for the top plate which is the ground voltage plus this voltage across the capacitor. When you do this, you see that the voltages are just right such that no current flows.

If you want to go into the extreme mathematical side to understand how the capacitor "knows" it isn't connected, you can go to Maxwell's equations, which describe the forces applied by electricity and magnetism as fields (which have values everywhere, even between "isolated" plates). In these cases, you'll find that the mere act of bringing the wire in to connect the circuit causes the fields to change. These fields technically propagate at the speed of light (in the medium), so they're not instantaneous, but they're far faster than most of us will ever measure.

If you want to know what happens if you actually connect two perfectly isolated capacitors instantaneously? The answer is: nothing, because it can't happen. This would be the limiting case as you take several values (such as the resistances and switch closure rates) to infinity. This does not exist in the real world.

As an example of this extreme effect of instantaneous behaviors, consider the case of an inductor, with a battery, and a switch, in a loop. We close the switch, charge the inductor. Then, we open the switch. The equations state that the voltage across the inductor will be infinite in this case. However, there are no perfect switches. What actually happens is the voltage goes higher as the switch gets opened faster. In the real world, we have to deal with this for motors. When you stop a motor, you have a big charged inductor that needs to generate a voltage as its magnetic field collapses. This can create a huge spark across the switch as you break down the insulation caused by the air in the switch, and burn all sorts of things out. It's not an infinite voltage, as shown in the idealized scenario, but its big enough to break things. Accordingly, you'll often see something like a massive-power low-resistance resistor with a big heat sink in parallel with the motor. Flip the switch, and the voltage runs through the resistor instead of all of your precious switching circuitry.

In that case, the real world situation is extreme, but the idealized case reaches out to infinity. Your capacitor problem runs into the same sort of issues, but instead of reaching "infinite voltage," you reach "zero current." In the real world, more complicated effects will occur.

Not the answer you're looking for? Browse other questions tagged electrostatics capacitance gauss-law conductors or ask your own question.

4
When I connect in series two floating capacitors, one charged and the other not charged, does current flow?
3
Potential Difference Between Capacitors in Series
2
Capacitors in series?
2
Charging Up a Capacitor
1
Is a complete circuit required for capacitors to redistribute charges?
1
What does annihilation of charges mean?
1
What happens if two capacitors having different charges is connected in series?
0
What happens when an external agent changes charge on a working capacitor?