Rotating the bucket in circular motion without spilling water

In the bucket experiment when the bucket reaches the top of the circle why will it have a normal force acting on the water downwards? Doesn't normal force oppose any other force? There is no force acting upwards... (As we are an observer in an inertial frame so we wont consider the centrifugal force because it is a pseudo force) 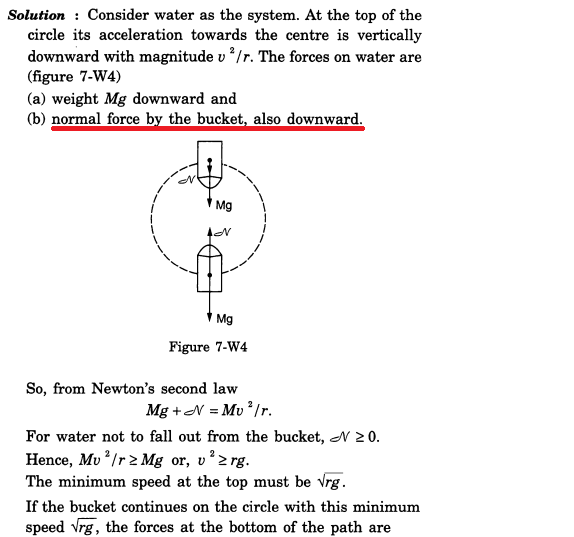 I want to focus on one thing, here. The nature of the normal force.

which is a easy impression to get when you are introduced to the normal force in the context of things sitting on other things in a gravitational field, but that's not the best way to think about it.

The normal force keeps things from occupying the same space.

So consider a book sitting on the lab bench. It's subject to gravity, and in the absence of other forces would fall. But to fall it would have to occupy the same space as the solid top of the bench. The normal force is the interaction between to two objects that resists their inter-penetrating. In this case it has to provide a force that is equal and opposite to that of gravity to make that happen.

However the bucket might be rotating faster in any given scenario but it still rotates on a fixed radius. Since the force required to maintain circular motion is given by

the force needs to be greater at higher velocities if the radius is constant. This means that gravity is no longer able to supply all the acceleration required to keep the water inside the bucket on its circular path.

The water wants to move to a larger radius but it cannot because the bucket is in the way. Hence the water feels a reaction force from the bucket. This contact force is simply the force required to hold the water at a given radius minus the force of gravity:

Another way to think about it is if you desperately tried to move through a wall the wall would exert a force on you and the force would increase the harder you tried.

In the bucket experiment when the bucket reaches the top of the circle why will it have a normal force acting on the water downwards?

The normal contact force is exerted by the bottom of the bucket as explicitly mentioned by the author. So, it is acting downward when the bucket is inverted.

Doesn't normal force oppose any other force? There is no force acting upwards

hmm... as said by Dirocology the bucket is forced by the contact force from the liquid; the normal force is reactive to that force.

Normal force plays the role of centripetal force when the velocity of the liquid is greater than $\sqrt{rg}\;.$

Wanted to give a different angle to thinking about this.

Since you mentioned you wanted to consider this from the inertial frame (non rotating), then there is indeed no (fictitious) force. But in that frame, we can consider the water is indeed falling; however, the rate at which the bucket is also "falling" is such that the two stay together - in other words at sufficient speed of rotation the bucket follows the water and the water stays in the bucket.

It is sufficient to demonstrate that the vertical acceleration of the bucket is $\ge g$; for this you can consider the curvature and resulting change in velocity vector. Which looks a lot like the derivation of centripetal force, of course...

Not the answer you're looking for? Browse other questions tagged homework-and-exercises newtonian-mechanics forces inertia or ask your own question.

6
Centrifugal Force
3
Does the outflowing water create a thrust on the bucket?
13
What is the reason behind water not falling from a bucket at the top of loop?
2
Why do we feel a force in circular motion?
0
Is the acceleration of a pendulum at the lowest point in circular motion $=0$?
3
Force due to air pressure on a block
1
Is pseudo force just an ad hoc number to explain motion in non-inertial frames?