Can the question of a gravitationally accelerated charge radiation be tested experimentally?

I know that the question of radiation from a gravitationally accelerated charge has been discussed extensively at Does a charged particle accelerating in a gravitational field radiate?. Yet the experimental aspect hasn't been touched up on. My question strictly on this topic can appear dumb, yet for a layman like me it appears as a self-evident proposition: why can't it be verified by a test or some observation - whether a freely falling charge radiate photons, how strongly and relative to which frame of reference it does or does not radiate? If it cannot be tested practically, could you please explain why, if possible. Many thanks.

There is some misunderstanding here.

whether a freely falling charge radiate photons, how strongly and relative to which frame of reference it does or does not radiate

if you mean a charge in free fall.

In this calculation:, from the conclusion

So it is not a charge in free fall that radiates but a charge supported and stationary. To measure experimentally on earth the electromagnetic radiation of a stationary charge is not possible

a) because the gravitational constant is so small that any radiation will have such small energy that it cannot be detected.

Look at the formula

which is equivalent to the power radiated by an accelerated charged particle (Larmor formula), where the acceleration is replaced by g.

b) accumulating charges as in van der Graaff accelerators induce a number of electromagnetic interactions which will radiate, not to ignore also the black body radiation, even in vacuum, and the electromagnetic coupling is orders of magnitude larger than the gravitational, which will inundate any signal

It is only in cosmological observations that one might need a contribution from such a mechanism , as discussed in the paper:

Motz suggested that the huge radiation emerging from quasars may be created by charges located in the strong gravitational fields close to the surface of the quasars. Although the current explanation for this phenomenon is different, radiation from charges located in strong gravitational fields can still play a role in certain cosmological phenomena.

Edit with some more quotes for clarification:

A freely falling charge in a uniform GF follows a geodetic line in this system, and it is not subject to any external force. The electric field of the charge follows similar geodesics. The charge and its field both are located in the same frame of reference, and in that frame their relative situation is similar to the one existing between a static charge and its field in a free space. No relative acceleration exists between the charge and its electric field, and we conclude that a freely falling charge does not radiate.

The italics (mine) explain the difference between the resting mass and the electric field. The mass reacts to the gravitational force, the field is freely falling. 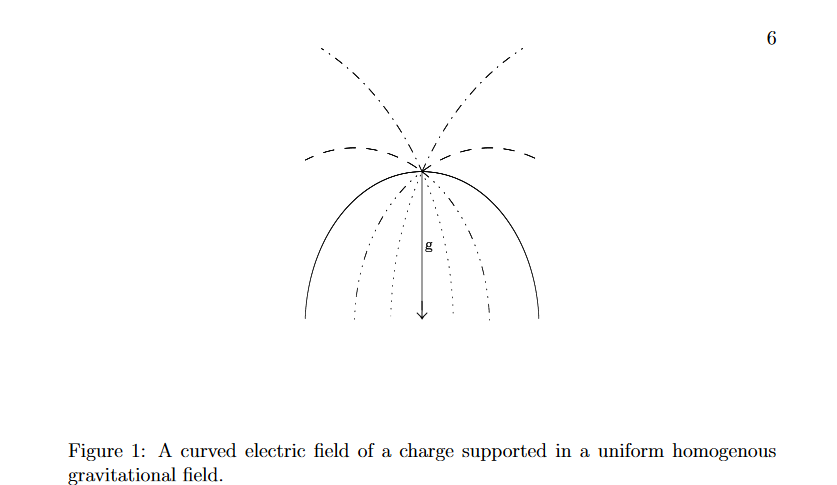 They go on to demonstrate a non vanishing Poynting vector, i.e. electromagnetic radiation.

Hand waving, I see it as the mass/charge_carrying part of the particle settling to a lower gravitational level as the energy is being radiated by the distorted electric field, and as I said it is a very small effect , significant maybe for cosmological dimensions.

I think it can be tested experimentally. Absent a gravitational field, it is possible to detect EM radiation from a moving charge: if the electrical influence of the charge at a distance is delayed relative to the position of the charge, as is expected from the finite propagation speed of disturbances in the EM field, then I'd say radiation is being detected.

A charged sphere could be dropped on a hard plate so it bounces. The bounce would be "chirped", increasing in frequency until the bouncing stops. The frequency would be low, perhaps as low as a few hundred hertz at its maximum. However, that signal should be detectable with a sufficiently sensitive apparatus.

There would be three possible components of the signal: one that would occur at the moment of bounce when the sphere is accelerated, and two components corresponding to the upward motion and the downward motion, both of which would be in free fall.

I'm not entirely sure that the two kinds of signals would be distinguishable, but considering that the frequency of the free-fall components would be somewhat independent of the details of the brief acceleration at the moment of bounce, I suspect that the components could be examined separately.

Testing whether a charged mass stationary in a gravitational field radiates is much more difficult, because there would not be a particular frequency to measure.

Detecting the emitted photons from a charge accelerating in Earth's gravity looks like a hopeless task, given that the radiated power is tiny (see formula 9 in Anna's answer). But we can try to exploit the fact that the number of emitted photons always diverges no matter how small the acceleration. While very low energy photons (so-called "soft photons") cannot be detected directly, the fact that such photons have been emitted can be detected indirectly by measuring decoherence effects.

For example, one can consider doing a two slit interference experiment with electrons where one slit is put above the other slit. Electrons on paths that end on some spot on the screen will emit soft photons, paths that pass through the upper slit will do so slightly differently than paths that pass through the lower slit. The state of the electromagnetic field is similar but not exactly the same for the two paths. The overlap between the two states will depend on where on the screen the electron ends up, the squared modulus of this function multiples the interference pattern that you would get without this effect. The larger the distance between the two slits, the larger this decoherence effect due to the emission of soft photons will be.

Not the answer you're looking for? Browse other questions tagged gravity electromagnetic-radiation experimental-physics acceleration estimation or ask your own question.