Consider the standard description of Compton scattering - radiation is constituted of stream of photons (these are supposed to 'real' as contrasted to 'virutal' photons of the QED). One of these photons interacts with an electron by imparting energy/momentum to it.

My question - Does not photon, which is supposed to be quantum of electro-magnetic field, interact with an electron "electromagnetically"? For example, why is that photon approaching an electron feels repulsive (and moves away from the electron) or attracted? Why is that these interactions are always characterized by transfer of energy/momentum? Moreover, what is photon 'hitting' the electron? Shouldn't that interaction be understood as "virutal photons" exchange between real photon and electron?

I am sure I am missing something here. Thoroughly confused. Any help and pointing in the right direction will be appreciated :)

photons quantum-electrodynamics scattering
Share
Improve this question
edited May 29 '16 at 5:39

My question - Does not photon, which is supposed to be quantum of electro-magnetic field, interact with an electron "electromagnetically"?

A photon and an electron are elementary particles, quantum mecanical entities. Probabilities of interaction in quantum mechanics are calculated from the wave functions of the system in QED, using Feynman diagrams to get at the necessary integrals. . The "electromagnetically" resides in the coupling constants at the vertices, which is the electromagnetic one. 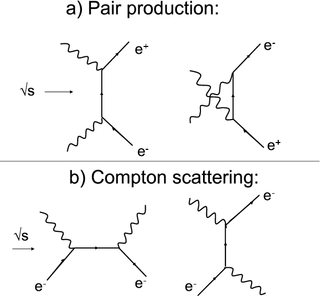 look at the lower diagram. A photon interacts with an electron, a virtual electron is the internal line, and a photon and electron leave as real particles. The "electromagnetically" resides in the couplings at the vertices, and the way the quantum numbers are conserved.

For example, why is that photon approaching an electron feels repulsive (and moves away from the electron) or attracted?

At the quantum mechanical level there is only a "scattering", angles and momenta can be calculated as probabilities of interaction. There is a probability of back scattering , but it is not a matter of attraction and repulsion.

Why is that these interactions are always characterized by transfer of energy/momentum? Moreover, what is photon 'hitting' the electron?

A photon "hitting" a particle means there exists a vertex at the Feynman diagram which has a non zero coupling, in this case of interacting with the electron.

Shouldn't that interaction be understood as "virtual photons" exchange between real photon and electron?

The interaction is at the vertices. It is the electron that becomes virtual in this diagram, i.e. it is off mass shell but still has the electron quantum numbers. It is off mass shell because it has the four momentum of the sum of the incoming two particles and is under an integral for the calculation. The mass of the electron enters in the denominator of the propagator that describes the internal line. To get the distributions, i.e. the probability function , one has to integrate the diagram for the variables of interest.

The cross-section for photon-electron interaction is quite low, and requires a very high energy density optical pulse to obtain. I attempted to use this interaction during work involving ultrafast optical and electron pulses, in order to determine the temporal crossing point of the two pulse trains.

Unfortunately my calculations were off by a factor of 10,000, and nothing was seen - but a colleague was able to produce the effect, and published a paper: Optical Deflection and Temporal Characterization of an Ultrafast Laser-Produced Electron Beam. This is an example of very non-linear optics.

At even higher power densities it is possible to build a wakefield accelerator; this paper highlights work done across the hall from my little lab. With this system they use the laser beam to accelerate the injected electrons to over 100 MeV over very short distances: the table-top particle accelerator, though the table-top fills up two ordinary sized rooms.

Not the answer you're looking for? Browse other questions tagged photons quantum-electrodynamics scattering or ask your own question.

2
Single photon's effect on conservation of momentum?
2
Why does a real/virtual photon interact only with charged particle?
1
Chemical bond and virtual particles
2
Can an electromagnetically induced dipole be explained with photon interactions?
7
Photons and Electric Current
2
Free (unbound, so not bound to a nucleus) accelerated electron cannot emit/absorb a real photon?
4
Does a photon attract or repel matter?
1
Does a photon interact with the spin of an electron?