What determines the (minimum) angle at which a domino falls over?

Dominoes, when placed upright, remain that way. Sometimes, even if you tip them a little bit, they will go back to their upright position.

However, if you tip them too far, they will fall over.

After trying this with many different sized/shaped dominoes and some textbooks, I've noticed that this angle of "maximum tippage" varies for each one, depending on its dimensions.

What are other factors are involved?

Is there a way to compute this maximum tippage angle, given the height of the domino, and the width of its base, and any other factors that might be involved? If so, what is this relationship (mathematically)?

(Dominoes start acting weirdly when their weight/density is unevenly distributed, so for this question, assume that dominoes are of constant density) 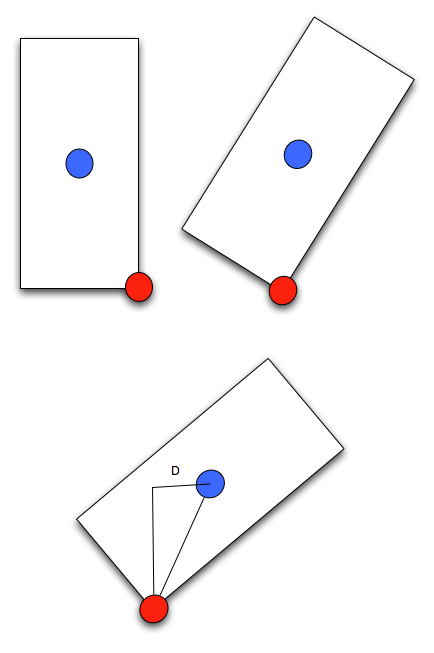 Taking this one in the limit case where $D=0$ you obtain the last sketch.

The angle of the domino with respect to the "table" is $90-\alpha$ degrees.

Not the answer you're looking for? Browse other questions tagged classical-mechanics equilibrium statics stability or ask your own question.

0
If there were two equal masses with one mass in the middle which way would gravity pull it?
6
What determines the bounce time of an elastic ball?
0
What determines whether a mobile will hang in stable or unstable equilibrium?
4
Minimum speed for cube to tip over and fall
0
What is the physics explanation for why an object with a larger base is more “stable” or and more able to “balance”?