Will accelerated observer see radiation from the charge that is at rest in observers's frame?

So I had a huge debate about this with my friends. Imagine that you are in a non-inertial frame of reference. For simplicity, assume that frame is accelerated along x-axis. You have held a charge in your hand and hence it is rigidly bound to your body. I am in an inertial frame and I see you accelerated and so I see the radiation coming out from the charge. Would you also see the radiation coming out from the charge even though it is at rest with respect to you?

In my opinion, if one uses the correct transformations, then the radiation in the accelerated frame should simply disappear and you would not be able to detect your acceleration just by looking at the charge. However, I am not sure about this.

There is another dimension to this whole issue in my opinion. Suppose that the correct transformations actually produce some extra term giving rise to the radiation in the accelerated frame. But even then, doesn't it seem more logical that this is solely due to the fact that you would then be accelerated with respect to the matter in the universe and there wouldn't be any such extra term in an universe with no matter at all?

Assuming that Classical Electrodynamics (Maxwell's Equations) holds, the answer is that the inertial observer would see the radiation while the non-inertial observer would NOT. The question you are asking is basically the following paradox: https://en.wikipedia.org/wiki/Paradox_of_a_charge_in_a_gravitational_field

This paradox has been analyzed and resolved in the following paper by Camila de Almeida: http://arxiv.org/pdf/physics/0506049%E2%80%8E

I will try to give a summary of the argument: 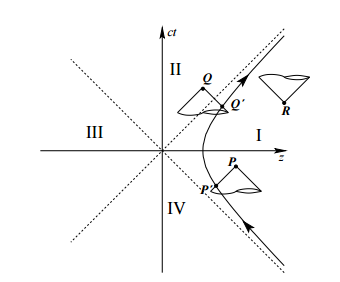 (This very helpful picture above is taken from Almeida's paper.)

Combining the previous two points, we see that the only region in which the charge can affect the accelerated observer is in region I. However, Almeida's calculations show that in region I, the field perceived by the accelerated observer is a static field, which means radiation is not perceived (although the inertial observer DOES see a zigzag radiation field.) So the paradox is resolved. The difference in experimental results arises from different perspectives.

P.S. Thanks to @Peter R for pointing out that, if we modify Maxwell's Equations, the situation is different! In fact, in Feynman's modification, no radiation is observed in any reference frame and all our previous analysis fails. But neither Feynman's nor Almeida's analysis have been tested in experiments. So the answer to your question remains unknown.

The radiation emitted by an accelerated charge depends on the boundary conditions on the fields at infinity. When one takes this into account properly, then accelerated observers will agree with inertial observers about the emitted radiation (after trivial transforms are applied). Any treatment which purports to show that in the accelerated observer's frame there is no radiation, cannot be correct, because you can always consider the 4-momentum of the charge and calculate the emitted radiation using conservation of energy and momentum. However, this requires considering the interaction of the charge with its own electromagnetic field. A rigorous way to treat the self-force problem was only recently obtained.

If the particle is accelerated by means of an electric field though, the particle "feels" the electric force (like we would feel it if we were attached to a sufficient charged object), because of its (or our) inertia (the "resistance" to being accelerated). There is no resistance to the acceleration of a charged particle in a uniformly accelerating frame (or in a gravitational field) which is the cause why we don't feel the acceleration.

So the particle in the accelerated frame (or in a gravitational field) is actually standing stil with us accelerating towards it, whlile the charged particle in an electric field really accelerates, causing it to radiate.

So I agree with Camila de Almeida and Feynman.

My opinion is that to delete the radiation by choosing the coordinate system is like to eliminte problems burying the head in the sand. You can adjust your velocity with one point-charge, but by no means with the entire field. On the other hand there is a basic mistake in the concept of to accelerate a point charge. A point charge must have an infinite mass and therefore can not be accelerated.