Why is angular acceleration of a pendulum always negative?

I was trying to derive using the Lagrangian the equations of motion of a simple pendulum under the influence of gravity. Eventually, I was brought to this conclusion: $$\alpha = -(g\sinŒ∏)/l$$ where $\alpha$ is the angular acceleration, $g$ is the gravitational acceleration, $\theta$ is the angle the pendulum makes with the vertical axis, and $l$ is the length of the rod. Ok. Fairly simple so far.

Say now we want to find the angular acceleration for a given angle $\theta$, but not just for a very small amplitude. Even though we know that sometimes $\alpha$ is going to be negative and sometimes positive, it's always negative! Why is that? What is going on here?

It would be easier to answer your question clearly with a drawing. 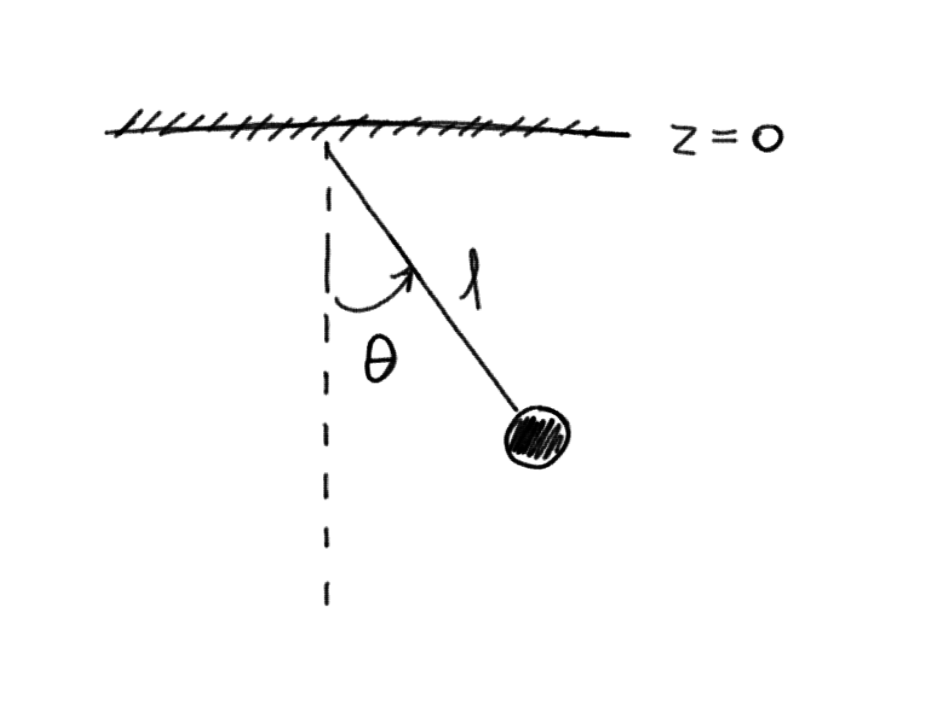 With this setting, I get the exact same answer as you by working out the equations of motion. However, there seems to be a confusion about the way to decide the sign of your result.

How can an arc length divided by a radius be negative and yet have a physical meaning? It probably has to do with the way I've drawn my edit, because right now it doesn't make sense.

You might feel better about the idea of negative angles once you realise that there are infinitely many equivalent representations of a given angle. For instance, the $0$ angle is the same angle as all the $2n\pi$ angles with $n\in \mathbb{Z}$.

More technically, all these angles are said to be part of the same equivalence class under the equivalence relation

It is perfectly all right to give an orientation while labelling your arc length so that you would switch from going to increasing numbers to going to decreasing numbers when you change the direction along its edge. It is also fine if you do not want to do that and instead work with absolute values. Regardless, once you have made the full circle, you would identify $2\pi=0$.

The practical implication of that for your case is that you would always measure the angles by going counterclockwise as in the picture above and that, after the pendulum has reached $\theta=0$ while moving to the left, its angle would then assume values that decrease from $2\pi$. Say it goes on the reach the symmetric angle $2\pi-\theta$. Owing to the periodicity of the sine function, you would then have

which is the exact opposite of the value it has on the right side.

Not the answer you're looking for? Browse other questions tagged classical-mechanics lagrangian-formalism acceleration rotational-kinematics angular-velocity or ask your own question.

4
Equations of motion for double spherical pendulum simply?
2
How do I find the linear components of acceleration in a pendulum?
0
Pendulum with Friction
4
Classical Mechanics, The Theoretical Minimum: angular momentum conservation for the double pendulum without gravitational field
0
Does changing the angle of a pendulum also shift the coordinate plane w.r.t which we give rectangular components to the $mg$ vector?
1
What is the acceleration magnitude of a simple pendulum?