Why do some location on Earth have only one tidal maximum per day instead of two?

Most places in the ocean have two high tides and two low tides per "day" (~25 hours). But I remember reading that some locations only have one of each per day.

This answer has some great explanations as well as helpful graphics and links. I'll re-link to one of them here. Don't watch it for too long!

Unfortunately while the tides are interesting to watch in the general UK area, the map breaks along the Prime Meridian at 0° longitude.

I did a search and found this US Navy publication Chapter 9: Tides and Tidal Currents and noticed Figure 908a. Here is a screenshot (note - those are feet, not meters): 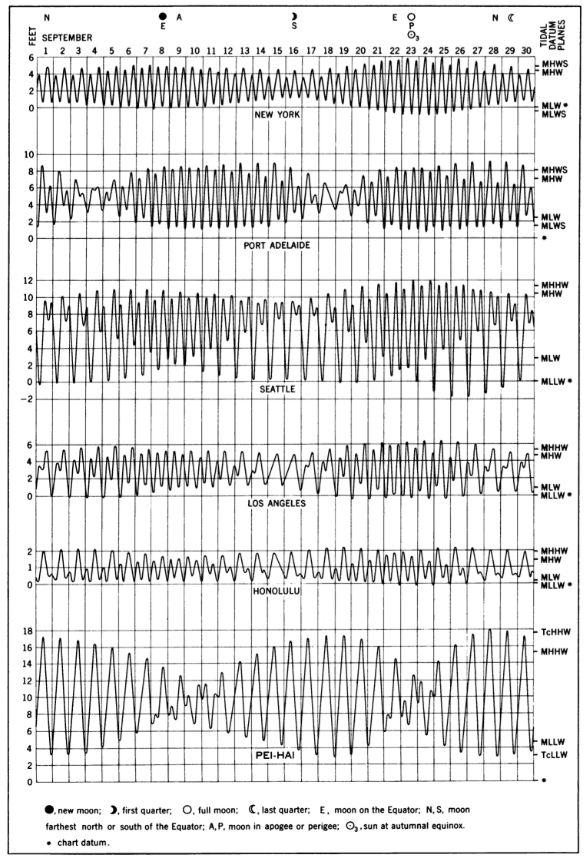 The bottom trace for Pei-Hai (Beihai, Guangxi, China) has - for most of the month, only one maximum and minimum per day. I then searched the "interweb" and found a random tide plotter http://tides.mobilegeographics.com/index.html and chose Pei-Hai and two other ports in the general vicinity. Sure enough, today for example (24/05/2016) there is only one maximum at Pei-Hai, while there is both a big one and a small one at Hong Kong, and two nearly equal maxima at Shanghai.

Maybe its a quirk of the shape of the ocean? Returning to the interweb I found this explanation at scijinks.jpl.nasa.gov/tidal-curiosities - which I can not understand at all, but seems to suggest this happens near the poles, not the equator.

Are these two related, or totally different phenomenon? What is really happening?

The tides are a result of the response of the Earth's oceans to the tidal forces exerted on the water by the Moon and the Sun. The responses are vastly complicated by the Earth's rotation about its axis, by the physical geography of the Earth, and by the nature of the orbits of these bodies. Of key interest with regard to this question are the inclination of the Moon's orbital plane and the Earth's equatorial plane with respect to the ecliptic.

Consider the forcing at a point on the Earth when the Moon is straight overhead (at the zenith point). 24 hours and 50 minutes later (a lunar day), the Moon will once again be straight overhead, more or less. What about the midway point, 12 hours and 25 minutes after that first instance in time? If the Moon was in an equatorial orbit, the tidal force at this point would be almost identical to the force when the Moon was straight overhead. This is the source of the semidiurnal tide, with a period of 12 hours and 25 minutes. This is called the "principal lunar semidiurnal" component of the tides, or M2 for short, where "M" denotes the Moon and "2" denotes two high tides per day.

However, the Moon's orbit is not equatorial. It's orbit instead is close to the ecliptic, about 5 degrees. Thanks to the Earth's axial tilt of about 23 degrees, the tidal force on the point of interest at 12 hours and 25 minutes after the first instance is less than it was at the first instance. This induces a 24 hour and 50 minute frequency response in the tides as well as the 12 hour and 25 minute frequency response. (Actually, this is an oversimplification. There are a number of different frequency responses with a period of about 24 hours that are a result of the Moon's gravitational pull, the Moon's orbit, and the Earth's rotation.)

The Sun raises tides as does the Moon. The largest component is the principal 12 hour semidiurnal solar tide, or S2 for short. All told, there are hundreds of different frequency components in the Earth's tides. The response of the Earth's oceans to these different components varies from place to place, and is different for each component, primarily because of geography.

Places where the M2 and S2 tides are suppressed but the diurnal tides are not suppressed see one tide per day. In addition to those places in China mentioned in the question, tides in the Gulf of Mexico are diurnal. These places the see a diurnal tide tend to be in or near the tropics because the forcing function for these diurnal tides are at their greatest in those areas where the Moon and Sun can be straight overhead. For the Sun, these are the Tropic of Cancer and Tropic of Capricorn. For the Moon, the latitude varies between 18 and 28 degrees over the course of 18.6 years.

OK, here's a theory: It's all (when I say all I mean mostly) got to do with the fact that the moon's plane of revolution is inclined about 20 degrees or so relative to the earth's equator. That causes differences in the frequency of tides in various latitudes. In order to see how that happens, here's a simplified example:

Draw a cross, so that you have 4 quadrants, a, b, c and d. Now Draw a circle with its center being the intersection of the crosses. The vertical diameter now is the axis of rotation and the horizontal is the meridian. Now let's suppose that the moon is seen to be directly overhead at a point x in quadrant a, making an angle of 45 degrees relative to the axis of rotation. That's where one peak of the bulge due to the tidal influence of the moon will be. The other one will be on the opposite side, on quadrant c. Now it's reasonable to consider the points of the circle in quadrants a and c high tide areas, and the ones in b and d low tide areas. As the earth rotates, after 12 hours point x will be in quadrant b, which is a low tide area. Other points, like points at the poles or the equator will experience no tides at all. That's how latitude can influence the frequency of tides.

Edit: Ok, here's how you should think about it in the case of the Earth: let's simplify the problem and consider a zone of low tides and a zone of high tides (nothing in between). I made a shape to illustrate how it would look (green is high tides, red is low): 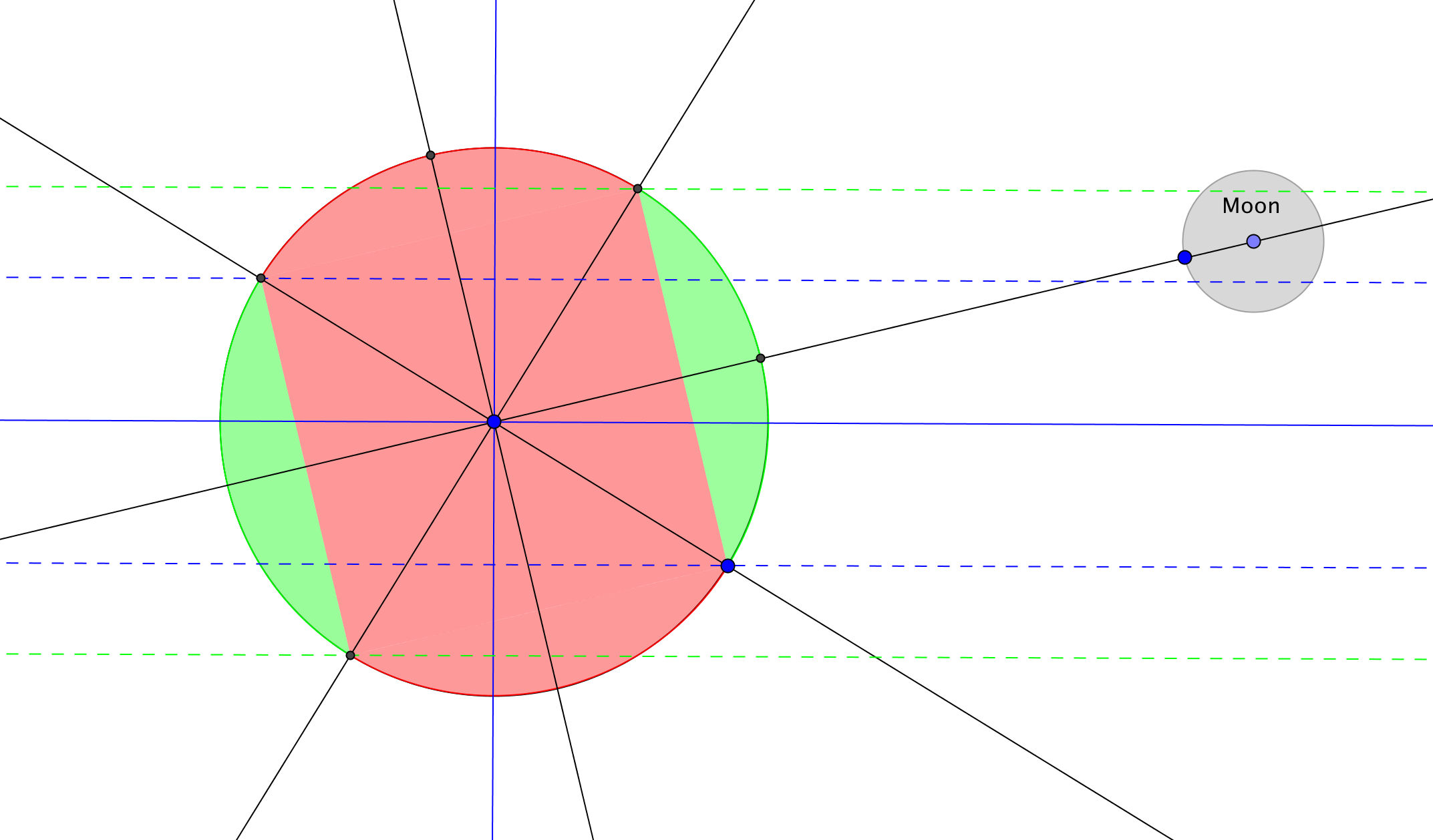 My simple answer to this is that high and low tides are a bit arbitrary; they're the turning points of a continuous function over time.

At the places you've mentioned, the (usually most significant) bi-daily tidal harmonic is "swamped out" by the (usually less significant) daily harmonic. It's still there – it's almost certainly non zero, but it's just not big enough to cause the tidal function to stop and go back in the other direction.

I understand that the strengths of components will be due to the local resonance of the body of water, and its interaction with the overall system. All this will be intimately connected to the local ocean topography and perhaps other effects.

There might be interesting general reasons why this happens, but I think it's more likely that it just varies between places. One would need to know enormously more about tides and oceanography / hydrology than I do to have an insight in to that!

I'm no expert on this, and the detail of tides is complex, but basically the situation is a =s follows. The moon (and sun to a lesser extent) provide a gravitational forcing with a period of just over 12 hours. Then the resultant ocean movement interacts with the local sea floor geography, which modifies the response. In most places the result is the "standard" (nearly) twice a day tide; some place get four tides a day, and some just the one. Also some places have virtually no tides.

Not the answer you're looking for? Browse other questions tagged newtonian-gravity everyday-life geophysics tidal-effect oceanography or ask your own question.

228
Does Earth really have two high-tide bulges on opposite sides?

2
Why do some satellites fall to Earth?
3
If a hot Jupiter was not tidally locked, then are there any specific cases where its wind speeds would be milder than those found on Jupiter?
14
Why can't one see tidal effects in a glass of water?
228
Does Earth really have two high-tide bulges on opposite sides?
9
Measuring tides in a swimming pool
1
How strong are the tides raised by Io on Jupiter relative to the ones raised by the Moon on Earth?
37
Why do tidal waves appear so suddenly in some rivers?
1
On the transfer of angular momentum in the Earth and Moon system
5
Tidal forces in daily situations: where to find it?