Why electric potential at equatorial point of a dipole is 0?

Well ok I know that electric potential at equatorial point of a dipole is 0. It is a derived conclusion.

Q1. But how this can be explained "theoretically"?

Another question that electric potential at infinity is 0. So if I bring a positive charge from infinity to the equatorial point of the dipole then the work done by me to bring it is 0. How could this be possible if I am true?

Q2. If I am not then what is the work done in this case?

homework-and-exercises electrostatics potential dipole
share|cite|improve this question
asked May 24 '16 at 7:25

If you look at the electric filed lines you will note that a positive charge moving in the direction of the blue arrow does have a force on it but that force is always at right angles to its motion. Hence no work is done moving the charge. 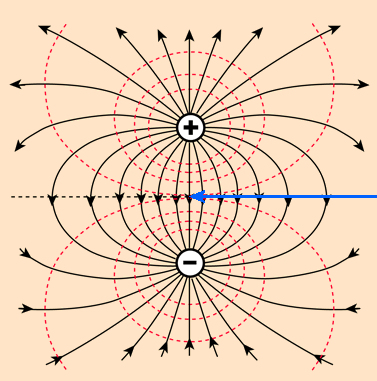 Q1. But how this can be explained "theoretically"?

I assume your question is about the concept of 'electric potential ' due to a distribution of charges and in the present case 'a dipole'.

The best way is to imagine an unit positive charge being carried/moved from infinity to a point on the equatorial line of the dipole.

Naturally your probe charge will be moving in the field of dipole charges , which are equal and opposite and

at any segment of the equatorial line say dy ,the effective field of forces or the net electric field is sum of the two forces acting due to the two charges of the dipole, which are opposite in character but equal in magnitude -

the segment dy is symmetrically placed with respect to the dipole charges ,therefore the two forces will be equal in magnitude but acting in such directions that their resultant will be normal to dy , and the displacement of unit positive charge being normal to net electric field can lead to a zero work done.

If work done during translation along all such segments be added together then the sum will be zero. so net work done will vanish and the potential will be zero.

therefore any curved path between infinity and the point P should give us the same potential difference-which in the presence case comes to zero. One can ask what is happening ?

Not the answer you're looking for? Browse other questions tagged homework-and-exercises electrostatics potential dipole or ask your own question.