Understanding thermal radiation in a conductor, gas and insulator

I was in my bliss of ignorance and happiness when I was taught that quantum mechanics was about nice discrete values of energies. Now I am introduced the idea of Fermi Energy in a block of solid and I have to face the fact that we are getting continuous spectrum out of everything, from the sun to a light bulb to a rock. Quantum is not quantum anymore.

Right or Wrong: Thermal radiation's spectrum is continuous for earthly normal objects like a lite light bulb or a conductor, it is because once you plug every electron in the solid into a giant quantum mechanics equation, I personally call it a "giant fermi pool" while obeying the Pauli exclusion principle, I will end up with many energy levels for trillions of electrons, those levels are going to be quite continuous.

Wrong. Thermal radiation is all about photons. It is obtained, when the modes of electro-magnetic cavity (e.g. vacuum inside a box) are occupied according to Bosonic statistics. The box can be imagined infinite, and one get's continuum of photon states, and the number of photons in each state is given by the Bose-Einstein distribution. In other words, the electrons and nuclei of the 'metal' of the black box plays only a very minor role here. There is some particular light-matter interaction between the matter and the photons in the box. The exact form of this interaction does not matter to the end result. It is just sufficient that there is some interaction. Now, if the electrons and nuclei of the metal have a different temperature, mediated through light-matter interaction, heat will flow to the photon modes of the cavity until the light and the matter are in thermal equlibrium. This is related to the equipartition theorem, which needs to be applied to quantum energy levels of photons in order to avoid the ultraviolet catastrophe.

Wrong. As discussed in part 1. the continuous spectrum is all about the photons being in thermal equilibrium. Thermal emission on atoms occurs when the temperature is sufficient large so that an electron can be thermally excited. This excited state of an atom does then couple only to very special modes of the cavity, namely to those which preserve energy and momentum. Therefore, one obtains sharp peak of photon energies when observing emission.

Right or Wrong: A block of insulator will have a discontinuous thermal radiation spectrum at some temperature as its "internal conditions" (like crystal lattice or boundary condition) just won't allow some energy state to exist.

Wrong again, I'm afraid. It is true that semiconductors and insulators have forbidden single-particle levels, for example so that there is a gap between their photoemission and inverse-photoemission spectra. But the idea is correct, since there actually exists structures which have a photonic-band gap. Similarly to the electrons, given certain geometry of the cavity, photons too can have band gaps. Due to geometry (for example a periodic lattice of metal beads in a transparent substrate) there are forbidden energy-levels for photons. Keywords: opals (yes, the common gems have a band gap in such that particular wave lengths of light cannot propagate in them), photonic crystals.

Here is an example band structure for photons, which shows the photonic band gap 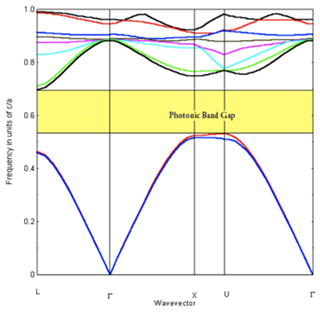 23
Why position is not quantized in quantum mechanics?
18
How do electrons jump orbitals?
1
Continuous spectra of photons
0
Blackbody radiation and thermal equilibrium?
10
Why don't I see green flames more often?
1
Radiation Emission in Rotating and Vibrating polar molecules
0
Why solids can produce a continuous light spectrum?