How did the universe shift from “dark matter dominated” to “dark energy dominated”?

cosmology space-expansion dark-matter dark-energy
share|cite|improve this question
edited May 23 '16 at 8:23

The title and the text actually ask two different questions. While Kyle Oman and Thriveth answer the title excellently, I'll address the question in the text which asks "Why did the Universe expand in the first place, before dark energy (DE) started to dominate".

The answer to this is inflation (we think). The first fraction of a second after the creation of space, it was dominated by "something" that mimicked the effect of DE, causing space to expand by a factor of $\sim e^{60}$. The epoch of inflation lasted until the Universe was some $10^{-32}\,\mathrm{s}$ old.

The expansion continued, but were slowed down by the mutual attraction of radiation, and later matter. If the ratio of DE-to-matter had been smaller, this attraction might have slowed it down sufficiently to halt the expansion before DE started dominating, but that was just not the case in our Universe.

Now what caused the inflation is another question, which someone else than me is better at answering. But I think the most accepted theory, or rather hypothesis, is some scalar field consisting of inflatons.

You request an analogy. I can give you the following:

Let's start partway through the expansion of the Universe in the matter dominated epoch. At this time the energy density is dominated by matter, but the dark energy and radiation components are still present, just relatively small. The Universe is expanding, but the expansion is gradually slowing down.

As the Universe expands, the density of matter scales as:

This is intuitive: space is expanding, which goes as the cube of the scale, but the amount of matter remains constant, so the density drops.

Provided we're talking about the usual cosmological constant dark energy model, the energy density for that component scales as:

I.e. the energy density doesn't change as the Universe expands. Roughly speaking, if you think of the DE as "vacuum energy", then since there is more and more "vacuum" as the Universe expands, there is proportionally more and more DE. In absolute terms, then, the energy in DE increases with expansion. This is what allows the relative contribution from $\Lambda$ to eventually dominate over the matter density. As this happens, the dynamics gradually change to an accelerating expansion. They key is that the Universe gets "big enough" for there to be "enough vacuum" for $\Omega_\Lambda$ to overtake $\Omega_m$. The fact that the Universe is decelerating during matter domination doesn't matter (as long as it doesn't stop and start to recollapse too early); the Universe is still getting bigger, just at a slower rate.

While I'm at it, I may as well mention that the radiation energy density scales as:

I though I would discuss the transition from radiation to matter dominated phases and from there to the dark energy phase. A fair amount of this can be discussed with just Newtonian mechanics. General relativity changes this by some subtle means, but as a coarse grained view, to borrow a stat mechanics term, Newtonian mechanics captures a lot of this.

Now consider the radiation dominated situation. For radiation in a volume $V \sim a^3$, we think of it as a standing wave in a region with periodic boundary conditions. As the volume increases the energy of a photon decreases because $E = h\nu = hc/\lambda$. The wave length is then some integral fraction of the volume $V \sim a^3$. Therefore the net radiation energy $E = \rho V$ and $E \sim 1/a$ and so $\rho \sim ~ 1/a^4$. We now again find the dependency of the scale factor $a(t) = 1/2$. Finally, for the easy case we let $\rho$ = constant, and this gives the exponential solution $$ a(t) = a_0\exp\left[t \sqrt{8\pi G\rho/3}\right] $$ I now include a generic graph of these functions below. The blue curve is radiation, red is matter and the green is exponential expansion. The orange curve is the sum of the three. These are not to physical scale with the real universe. 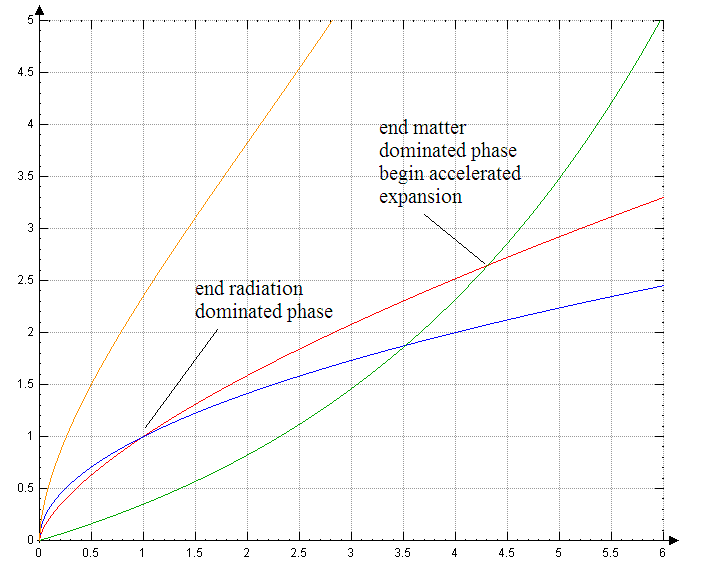 Dark Energy, on the other hand, is (by definition) constant or almost constant in density. This means that no matter how dilute the Dark Energy is, if it waits long enough, the Matter density will drop below it and never get back up above it again. From this point, the Universe will be Dark Energy dominated, rather than matter dominated.

The energy to get to this points comes from the leftover momentum of the Epoch of Inflation. The Universe did indeed decelerate in the beginning, but not enough to prevent getting into the Dark Energy dominated epoch.

Not the answer you're looking for? Browse other questions tagged cosmology space-expansion dark-matter dark-energy or ask your own question.

15
Conservation of Energy vs Expansion of Space
8
The Redshift of the CMB vs. Dark Energy
3
Is the cosmological constant the simplest candidate for dark energy?
9
Was the matter-energy content of our universe always distributed in the same ratios?
3
Is there 'gravitational force of repulsion'?
1
Can dark energy be used for interstellar propulsion?
3
Regarding the universe, doesn't “almost flat” mean “not flat?”
2
Expanding Universe
2
In Big Rip scenario: will there be an equilibrium point?
2
Why is acceleration of expansion of space unexplained?
see more linked questions…

22
What experiments, other than Hubble Expansion, support the Dark Energy theory?
1
How is dark energy calculated
10
Dark Energy / Accelerating universe: naive question
5
Doesn't the presence of dark energy make the flatness problem less important?
1
Could dark energy just be another characteristic of the gravitational force?
2
Was the expansion of the universe ever decelerating?