I am learning Classical Mechanics from a book called Newtonian mechanics by AP. French. The book tries to explain Coriolis force with an experiment as an example which confounds me. The book goes something like this:-

We can find the magnitude of this[Coriolis] force by investigating another simple motion. Suppose that instead of the situation just described[wherein on a horizontal table rotating with a uniform angular velocity, we had a particle held at a particular radius by fastening it with a string to the center of the table], we make a particle follow a radially outward path in the rotating frame at constant velocity $\vec v'_r$ . In this frame there must be no net force on the particle. Clearly, it follows a straight line path in the rotating frame. But in the stationary frame it follows a curved path, $AB$ . In $S$ the transverse velocity $v_{\theta}\;(= \omega r)$ is greater at $B$ than at $A$ , because the radial distance from the axis is greater at $B$ . Hence there must be a real transverse force to produce this increase of velocity seen in the stationary frame. This real force might be provided, for example, by a spring balance. 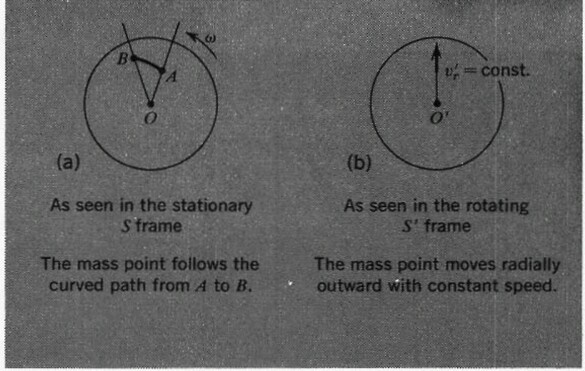 I am fine with it except for the final line(in bold). Where is the spring balance here? I can't imagine where I could fit it in the picture for it to give a transverse force to the particle. Is it attached to the center or the circumference of the circle or where else? Understanding where the spring balance is, seems essential here for understanding the existence of the Coriolis force as the book itself later says:

.. since an observer in $S'$ sees the spring balance exerting a real sideways force on the object in the $+ \theta$ direction, he infers that there is a counteracting inertial force in the $- \theta $ direction to balance it

PS:- If you want to read exactly what the book says, please follow the link above and go to page 514 of the book.

Where is the spring balance here?

It's not present. It's a statement that anywhere you find a force, you can put a spring balance along with it to measure the magnitude (at least conceptually).

In this case, we might imagine that there is a solid radius present (like a rod), and a spring balance attached to the radius, free to move radially, but aligned with the circumference and able to measure forces in that direction. As the mass (and therefore the balance) move from $A$ to $B$, the balance will indicate a force in the counterclockwise direction on the mass.