Why can't electrons absorb any energy (i.e. absorb some energy of the photons necessary and emit the residual)?

Recently I had a question in mind about the absorption of photons. Why is it that only specific energy levels can be absorbed by electrons? I mean, I get the idea that electrons in an atom have only discrete energy levels and it does seem logical that it would only absorb photons with an energy corresponding to an energy difference in the atom.

But consider this: Let's say a photon has an energy value of 10eV and the electron needs let's say 7eV for an absorption. Why can't the electron just take the necessary 7eV and the residual (i.e. 3eV) energy of the photon will be used to emit a photon with that residual energy?

I tried researching on that question on my own and I found some reddit posts saying that it has something to do with the broadening of the frequency (i.e. spectral width). But doesn't really convince me.

Okay, so just to be clear I am going to consider processes in which a photon and an atom at some energy level go in, and the photon and atom exchange energy (and momentum) such that a photon with a shifted (either higher or lower) energy comes out, while the atom ends up in a different internal electronic state than it started in. A general diagram looks like: 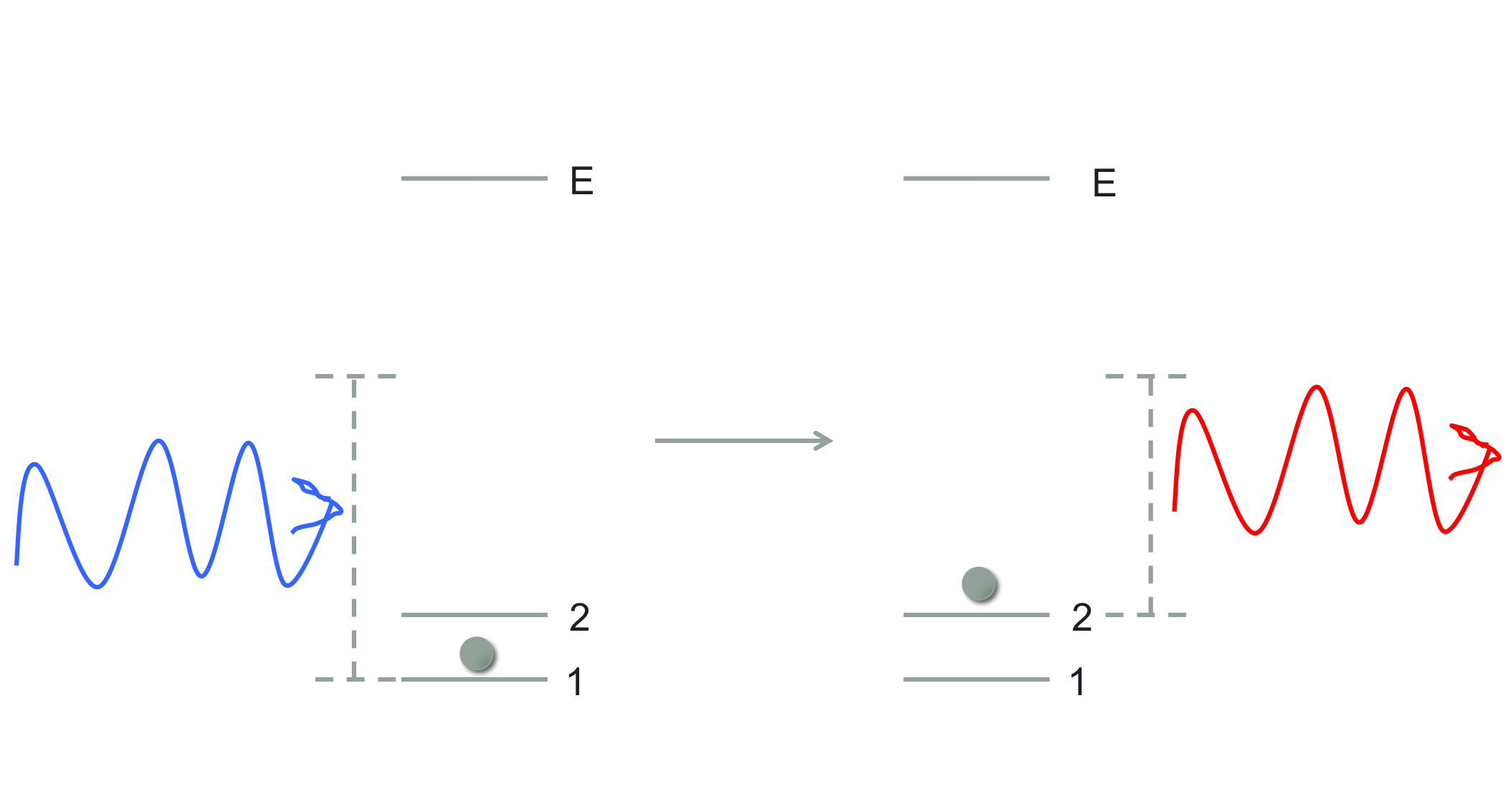 where non-resonant light comes in, and causes a transition between states 1 and 2 with the outgoing photon's energy also shifted in the corresponding way. I have not showed the momentum change, but that will be determined by the energies and the geometry of the situation. I've drawn this where $E_2>E_1$, but the reverse process is also possible in which the photon gains energy.

First of all, you are certainly right to wonder why this process shouldn't be allowed. As I've mentioned in a different context, a useful way to think about many physical processes, attributed to Gell-Mann, is that "everything not forbidden is mandatory." So, when the internal atomic transition + photon shift can be accomplished in a way that conserves energy, and angular and linear momentum (and also obeys some other selection rules such as those involving parity), we should expect that it is possible. And it is!

As mentioned, these processes are normally called "Raman scattering," and are an important tool in materials science for the study of vibrational levels of materials. However, to directly address the question of charles boyant, the idea of a Raman transition is more general than this. For example, in atomic physics, Raman transitions (in a slightly different form known as stimulated Raman) are often used to go between two spin states of an atom. In this case, the polarization of the photon must change along with its energy so that all conservation laws are obeyed.

Okay, so if this can happen why did you learn that atoms can only absorb light at certain frequencies that correspond to atomic transitions? There were probably two motives behind this simplification:

This way of distinguishing between absorption and inelastic scattering is particularly useful when comparing Raman processes to processes where the light is on resonance with an atomic transition. This would be the case, for example, in which the light is resonant with the 1->E transition, and the atoms can then decay both to states 1 and 2. This has a similar result to the Raman process, in the sense that photons of one energy come in and photons with a shifted energy corresponding to the difference between atomic levels come out. However, since the absorption is a resonant process, the transition strength, wavelength dependence, and actual atomic state during the process is different in these two cases.

This answer is not rigorous, just an afterthought: Remember that a photon has to be fully absorbed first, it will not absorb and emit simultaneously. This would leave us with an electron that is momentarily in a forbidden energy state. From that state it could emit a photon to jump to what should be its correct (i.e., allowed) energy level. Uncertainty will allow some of this to happen, and will create a natural width of the lines, but it is limited to small deviations of energy, for any practical purposes. What you would need is a mechanism similar to tunneling, in which a particle can spend some time in a forbidden region. But this is also related to the uncertainty principle.

I am not aware of any tunnel-like mechanism that would allow an electron in an isolated atom to stay momentarily in a forbidden region beyond the uncertainty principle. If it exists, it is either too small to be measured or it is forbidden by some more advanced theory, such as QFT.

It's as simple as that.

Not the answer you're looking for? Browse other questions tagged photons electrons atoms absorption photon-emission or ask your own question.

13
What is the difference between Raman scattering and fluorescence?
10
Energy conservation limited by uncertainty principle
4
Why does accelerating electron emits photons?
0
How does an electron know which is the next energy level?

1
Do electrons in absorption spectra absorb photons with enough energy to release them from their parent atoms?
0
photon absorption and emission
17
How does an electron absorb or emit light?
28
Why do electrons absorb and re-emit photons?
0
How do the electrons absorb energy in an discharge tube that is used for produce an emission spectrum?
0
What rules govern the absorption of photons by electrons when the photons exceed the work function of the material?
4
Does photon absorption occur in discrete packets?
3
Do atoms emit and absorb photons at the same wavelengths?
0
How soon does an electron emit the absorbed photon back?