Cooling down to absolute zero by radiation

Consider a system consisting of a gas, it is put in a container which is permits transmission of all kinds of electromagnetic waves. If this system is isolated and put in a perfect vacuum, and left for sometime, will it achieve absolute zero? I think so because every particle above absolute zero will emit thermal radiation(energy) in the form of em waves, since our boundary permits em waves to travel through it ,our system is constantly loosing energy , so as per law of conservation of energy the kinetic energy must decrease and finally all particles must stop moving( characteristic of absolute zero).

So , am I correct? Correct me please if iam wrong!

You seem to make the implicit assumption that your vessel is placed in an environment that does not emit any thermal radiation, i.e. is already at 0 K temperature. The temperature of your container will asymptotically decrease to 0 K but will never actually reach it.

Update If you want to do the calculation more precisely, you'd first have to put a prefactor for the emissivity of your gas, as a function of temperature. Typically, gases at reasonable densities in man-like volumes have an emissivity very close to zero. Moreover, at some point, the gas would condense on the walls of your container (I think around 20 K for hydrogen and 4 K for helium, and much higher than that for anything else), which would turn your "gas in a container" into a much more difficult "solid state on a container wall" problem.

Only once you've figured out all that, you can start to wonder about more fancy quantum mechanics such as the probability that the entire crystal lattice makes the transition from its first excited state to the global ground state via a radiative transition. I'd wager that it will take more than the age of the universe to get there.

There are some issues with the experimental setup you proposed (apart from the fact that when its temperature is lowered the gas would become a liquid and then a solid - if it's not $^4$He: in that case it will stay a liquid). Let's see why. 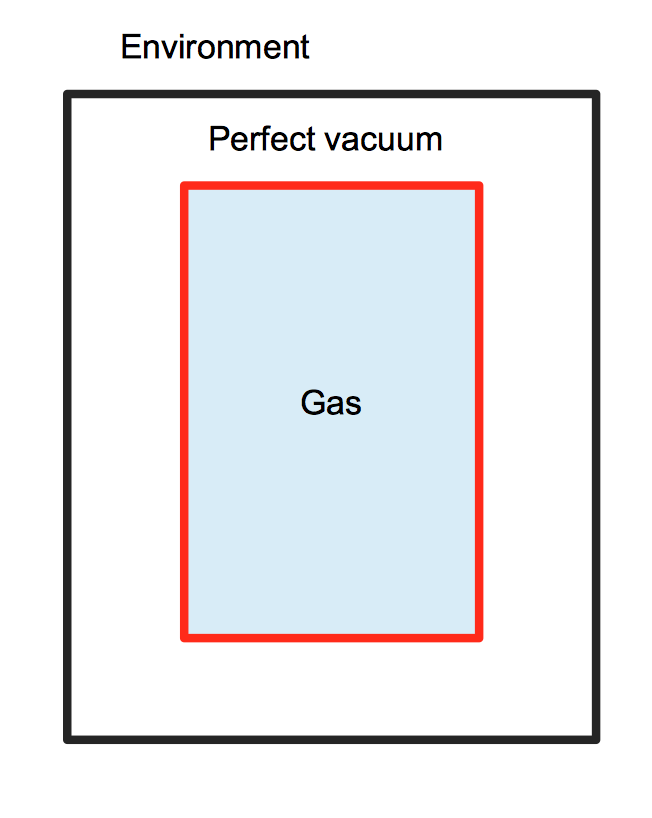 The first problem which arises is this: we want radiation to escape our system, so it must be possible for radiation to be able to pass trough both the red and the black box. But if the environment is at a non-zero temperature, it is going to emit radiation too! In that case our cooling equation will be

You could be tempted to make the red box impermeable to radiation, but if you do this there won't be any cooling because the radiation will be trapped inside of your system.

So in order for our system to reach absolute zero, as pointed out by Han-Kwang Nienhuys, you will need the environment to be at absolute zero in the first place. This is troublesome. But let's say that we are going to obtain this in some way, maybe removing the rest of the Universe from existence and leaving only our red box in an infinite perfect vacuum. There would still be two problems.

The first (and again, Han-Kwang Nienhuys pointed this out) is that it would take for your system an infinite time to reach the absolute zero.

The second is more subtle, and it is the following: how are you going to know if the system reached absolute zero? To do so, you are going to need a thermometer that is operational at absolute zero. And even if you have it, it must be able to measure temperature with infinite precision: we want our system to be at $0$ K, not $0 \pm 10^{-80}$ K. Is such a measurement even possible?

So, you see: "reaching absolute zero" is a really troublesome concept. We don't really know wether it is possible or not, but it would rise fundamental theoretical problems. Someone will say: "Wait! But Nernst's postulate says that reaching absolute zero is impossible!". Well, that's not true. I'll quote Callen (Thermodynamics and an Introduction to Thermostatistics), because he has much more authority than me:

The question of whether the state of precisely zero temperature can be realized by any process yet undiscovered may well be an unphysical question, raising profound problems of absolute thermal isolation and of infinitely precise temperature measurability. The theorem that does follow from the Nernst postulate is more modest. It states that no reversible adiabatic process starting at nonzero temperature can possibly bring a system to zero temperature. This is, in fact, no more than a simple restatement of the Nernst postulate that the T = 0 isotherm is coincident with the S = 0 adiabat.

It won't work because your perfect vacuum is permeated by the cosmic background radiation, which itself is only asymptotically reducing to zero with the expansion of the universe. Trying to exclude the cosmic background radiation backs you into the infinite steps that forms the basis of the third law again. Also, using a container results in quantum interactions with the walls of the container which have the nasty habit of excluding the zero momentum state from being valid due to waveform interference.

6
Didn't we mess up with the temperature?
1
Confusion with Blackbody Radiation
1
Is temperature basically a constant heat supply?
2
Thermodynamic equilibrium, mixing gases of two different temperatures
0
Change in enthalpy in an isolated, isochoric system
0
Definition For Internal Energy Of An Ideal Gas
1
Cavity Radiation, why should only standing waves persist in the cavity?
0
Big problem with the standard derivation of Rayleigh-Jeans law + reason for this standard approach + solution