How do we explain the existence of liquids, from a mathematical or computational perspective? [closed]

Ask Question
Asked 6 years ago
Modified 5 years, 6 months ago
Viewed 626 times
6
$\begingroup$
Closed. This question needs to be more focused. It is not currently accepting answers.

This post asks why matter exists in three phases. Most of its answers explain the existence of liquids with some variant of the following:

liquids happen when thermodynamic conditions, temperature and pressure, are such that some of the bonds of the lattices are loosened, and extra degrees of freedom appear

Liquid: molecules form bonds with neighboring molecules for most of the time, but there are enough energy for the bonds to break momentarily and be formed again with another molecule.

These explanations seem hand-wavy to me.

After reading the explanations, I still have a lot of questions about the mathematics, for example:

In lieu of a good mathematical understanding of liquids, I think that I could be more confident in our physical theories if I knew more about computer simulations of liquids, for example:

I will try to answer as many questions as I can. I won't presume to give you complete exhaustive answers, but maybe they will be nonetheless useful to you.

What variables determine the range of temperatures over which matter is liquid? My understanding of thermodynamics is that matter changes from a solid to a gas when some thermal vibrations create an effective repulsion of sufficient magnitude to overcome the forces of attraction between particles. But a balance of these two forces only gives rise to two phases - the "attraction < repulsion" phase, and the "attraction > repulsion" phase. A second inequality seems necessary to get three phases; what is it? I guess pressure must be involved, but how?

I think that it is better to reason in the following way: if $K$ is the total kinetic energy and $U$ is the absolute value of the total potential energy, you will have

Do classical "billiard ball" computer simulations give rise to solid-liquid-gas phenomena? I'm talking about simulations with identical hard spheres bouncing off of each other without friction. If not, what is the smallest modification to such simulations which is necessary to observe liquids? For instance, is it sufficient to modify the potential barrier between particles to be somewhat smooth (rather than an infinite step function as for hard spheres)?

System of hard spheres have been extensively studied theoretically and with simulations and nowadays we know quite a lot about them. In the following picture, you can see the phase diagram of an hard-sphere system: 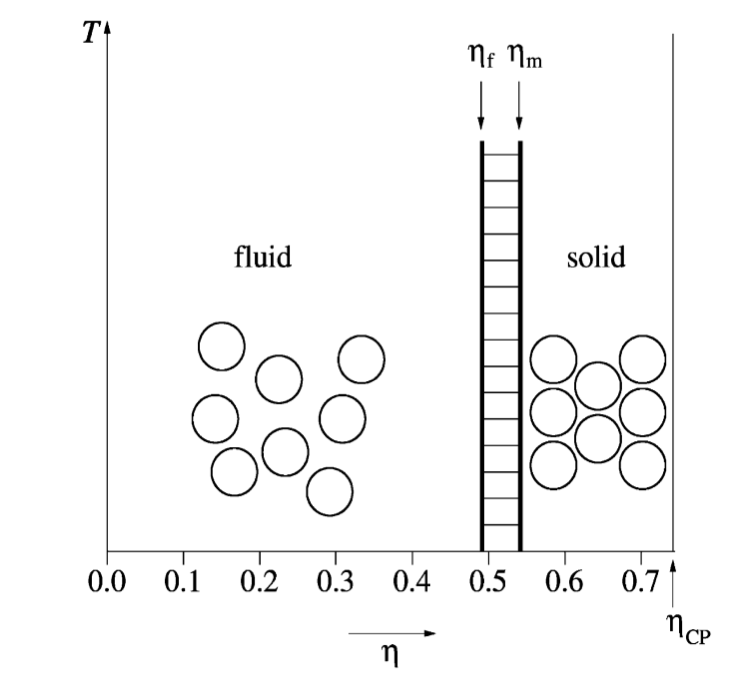 The first thing you will notice is that temperature is irrelevant for the phase behavior of such a system. This is because the only interaction is the "infinite step function" you mentioned, so changing the temperature will just make the dynamics of the system faster or slower but won't change the average intensity of the interaction (because the potential energy is simply $0$). The phase behavior is only controlled by the packing fraction

Where $\rho$ is density and $\sigma$ is the diameter of a sphere. The packing fraction is just the fraction of the total volume which is occupied by the spheres.

You can see that the system has only two phases: fluid and solid. The fluid freezes at $\eta_f=0.494$ and the solid melts at $\eta_m=0.545$. Between those two values fluid and solid are at equilibrium. The maximum value of $\eta$ is the close-packing packing fraction $\eta_{CP}=\pi \sqrt{2}/6\simeq0.74$ and it is realized for cristalline hcp or fcc arrangements.

So there is only one "fluid" state for hard spheres: there are no "gas" and "liquid" phases. So there is no liquid phase in an hard sphere system. To have a liquid state, it turns out, we must introduce some sort of attraction: even a square well potential is sufficient.

The most important feature of the pair potential between atoms or molecules is the harsh repulsion that appears at short range and has its origin in the overlap of the outer electron shells. The effect of these strongly repulsive forces is to create the short-range order that is characteristic of the liquid state. The attractive forces, which act at long range, vary much more smoothly with the distance between particles and play only a minor role in deter- mining the structure of the liquid. They provide, instead, an essentially uniform, attractive background and give rise to the cohesive energy that is required to stabilise the liquid.

So to have a liquid you need repulsion (and that's in a certain way the most important thing), but also attraction. It is not sufficient to modify the repulsive barrier to make it smooth: you have to make it (partly) attractive!

Alternatively, is quantum mechanics necessary for a correct description of the phenomenon of liquidity? Is it necessary to invoke superconductivity (e.g. of phonons)?

No, superconductivity and phonons are not really necessary. And quantum mechanics isn't either. I mean, if you want to find the exact function describing the inter-molecular forces in a liquid you will need to take QM into account. But simple models are more than sufficient to understand the physics of liquids. You could take a square well,a Yukawa or a Lennard-Jones potential and the system will always show a liquid phase with a qualitatively similar behavior. In general, QM becomes important when the De Broglie thermal wavelength of the particles

is of the order of the mean nearest-neighbour separation,

For most liquids (an exception being for example $^4$He which becomes a superfluid in a certain pressure-density region), quantum mechanical effects can be completely neglected.

Anyway, to conclude, I would suggest that you tried to think about the free energy $F=U-TS$. A system will always try to minimize its free energy. At low temperatures, the $TS$ term won't be so important so the system will minimize $U$ forming as many bonds as it can (the solid state). At high temperatures the $TS$ term will be more important so it will try to attain the most disordered, high entropy state it can attain (the gaseous state). But at intermediate temperatures, when both terms are important, it will find a "balance" between energy and entropy, and from this balance the liquid state will result.

Remember: the liquid state is no easy business to study!

The classical fluid is perhaps not everyone's cup of tea -N. W. Ashcroft

Liquid: molecules form bonds with neighboring molecules for most of the time, but there are enough energy for the bonds to break momentarily and be formed again with another molecule

"These explanations seem hand-wavy to me."

What is the level of your knowledge of physics? Are you aware of the quantum mechanical nature of atoms and molecules, at a mathematical level?

Where the electrons are not, the positive charge of the nucleus takes over, and thus attraction exists between atoms and molecules , bonding forces.

Even at this proximity level the quantum mechanical behavior changes drastically the possibilities/probabilities of bonding.

Yes, quantum mechanics is the underlying level for classical observations, and the way that bonds form gives the large variety of possible matter forms.

Solids, liquids and gasses form because of this underlying molecular level that modifies drastically the interactions of "inert spheres" . It is complicated LEGO blocks that form matter that we study thermodynamically. The solutions depend on the energy of the interacting molecules and bondings can break if temperatures are high as temperature ( a thermodynamic variable) is connected to the kinetic energy of the degrees of freedom of a molecule/atom.

At the quantum mechanical level , the bonding structure of specific molecules can be modeled mathematically , and it will describe the bulk behavior, i.e. low or high melting point, evaporation point , plasma formation point but necessarily quantum statistical mechanics will have to be used.

For specific problems people may go to the trouble to do so . Trouble, because thermodynamics describes mathematically the bulk behavior of matter elegantly and with great accuracy. One does not need to go to the molecular level to predict a tsunami ( as a gross example).

Therefore, unless there is a very important or interesting reason mathematical models of the behavior of bulk matter are thermodynamic ones. People are doing the hard work for specific problems of interest, as a search on the web can show, for example:

A quantum mechanical quantitative structure-property relationship study of the melting point of a variety of organosilicons.

Handwaving in physics is a way of saying that "this needs years of study" , but here is a simple outline.

Not the answer you're looking for? Browse other questions tagged quantum-mechanics thermodynamics simulations superconductivity liquid-state or ask your own question.

16
Is this Landau's other critical phenomena mistake?
8
Why do phase transitions even exist? Why not smooth density change curves?
4
Heat capacity of solids vs liquids $s_{liquid} = 2\ s_{solid}$
2
Matter state between liquid and gas
2
Is each level of ionization in a plasma a separate phase?
7
Phase Transitions from a Bayesian Perspective of Statistical Mechanics
1
Equation of state of Lennard-Jones spheres
1
On the dielectric constants of liquid and vapor phases of a material