The Zero Electric Potential of the “Earth”

I know its the potential differences that matter and generally we define the zero of the electric potential according to our convenience. I would like you to look at this standard problem: 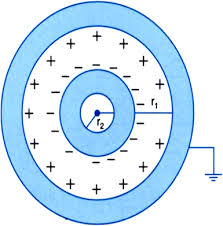 Charge $-Q$ is given to the inner (conducting) shell and the larger outer (conducting) shell is earthed . And the question asks to find the net charge on both the shell. In the standard solution the electric potential of the outer shell is taken to be zero saying that since it is earthed and potential of the earth is zero so electric potential at the surface of the outer shell must also be zero. Then the potential due to the charges on the surfaces of the shells is equated to zero by considering Zero potential at infinity. I want to know how is potential zero both at the earth and at infinity. Also, I want to know how to solve such problems without using the concept of "potential." A similar question can be found here: Why the electric potential of Earth is zero?

The top voted answer says that the earth is just a reference point.But then I would like someone to solve the above problem by considering the earth to be at some arbitrary nonzero potential $V$. (Also, don't forget that the outermost surface of the outer shell will also be charged). It would be great if you can provide me links to reliable sources about the zero potential of the Earth.

P.S :- This is not a homework question.

Now what is the value of that potential?
You can call it zero and then infinity will be at a negative potential or you could have infinity at zero potential and then the outer shell and the Earth would be at the same positive potential.

Starting from the beginning with no Earth connection.

For simplicity let the zero of potential be infinity and the Earth and the inner and outer shells having no net charge on them also having a potential of zero.
If the Earth does have a charge in what follows the only change is that the potentials all change by an amount equal to the initial (non-zero) potential of the Earth.

The redistribution of charge occurs locally and the area of the local region is very, very much smaller than the surface area of the earth.
So a 10 F capacitor with one terminal earthed when charged with $+1$ coulomb will leave a charge on the Earth of $-1$ coulomb close to it thus disturbing the local potentials but the potential of the Earth as a whole hardly at all.

I did want to try and make the answer more quantitative but this interesting article “Electrostatics of two charged conducting spheres” made me realise that finding and then applying the capacitance of two unequal sized spheres is not a trivial matter.

So, the potential is not necessarily zero both at the ground and at infinity. First off, there's nothing in physics which forces the potential to be zero at infinity; it just happens to be a nice way to think of the Coulomb potential. Potential energies are not absolute numbers; there is a constant of integration that enters into them!

Second, there is nothing in physics which forces the surface of the Earth to be the same potential as points in the distant cosmos; the Earth could retain some electric charge while the solar wind sends some of it out into distant space, for example.

However, we do know that this must be bounded, because if the Earth does have a net charge, it must be pulling in the opposite charge back towards it with a relatively strong force, and trying to expel other ions from our ionosphere etc. We know that the electrostatic force is actually relatively powerful even on human scales, and is certainly much much more powerful than the gravitational force holding the Earth together. If you want, you can try to see how big this would be. We know that free electrons are not repelled from Earth's surface into space or sucked into the ground appreciably; let's say we know this to within 1% or so. The Coulomb force of two electrons at a distance of Earth's radius is $5.67 \cdot 10^{-42} \text{ N},$ which we can divide by the electron's mass to find $6.23\cdot 10^{-12} \text m/\text s^2.$ The gravitational acceleration is almost $10~\rm{m/s^2}$, a little over $10^{12}$ times larger, so we have an upper limit of around $10^{10}$ surplus elementary charges distributed in any spherically-symmetric way about the Earth -- any more than that and we would have noticed (within 1%) that free electrons tilt towards the ground or else to the sky.

That gives a maximum surplus charge of only $10^{10}$ elementary charges, or $1.6 ~\rm{ nC}$ for the entire Earth, so the difference in electric potential from infinity from that would only be about $2.3~\rm{ \mu V},$ or less if there is some sort of opposite-charge cloud around the Earth (which would also increase the push on the electron!)

Not the answer you're looking for? Browse other questions tagged electrostatics potential voltage conventions gauss-law or ask your own question.

1
When the electric field in an electrostatic charged conductor is zero, is the potential within also zero?
2
Laplace equation vs Gauss theorem
1
Non-Zero Electric Field Inside A Conducting Shell
1
Problem in Proving the potential due to concentric shells between the shells
0
Why are the charges pushed to the earth?
1
Why do we assume that Earth and infinity are at same potential?
1
Why is there electric field inside conductor in between shells if inner shell is charged?
2
How much charge will flow to the earth?