What is the nature of equilibrium between water and air in a sealed container that is heated above 100C?

In the case of a single substance (water), looking at the phase diagram is enough to conclude what happens upon heating: 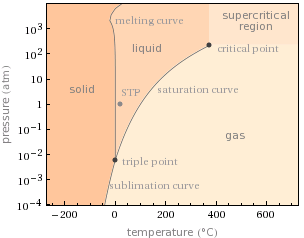 But what if I have water and air (or some other gas) in the same sealed container? Would the air saturate at some point and prevent further water from turning into gas?

Superheated water is stable because of overpressure that raises the boiling point, or by heating it in a sealed vessel with a headspace, where the liquid water is in equilibrium with vapour at the saturated vapor pressure.

But is there a quantification of this "equilibrium"?

Let's say that you have a vessel containing water and air and you start heating it. The temperature of the water and air inside will start to rise and so will the pressure, because the air would like to expand (but volume is fixed and water is almost incompressible). Since the boiling point of a substance depends on both pressure and temperature (for example water can boil at ambient temperature in a vacuum), this will prevent water from boiling until its vapor pressure overcomes the air pressure. This is how a pressure cooker works.

When vapor pressure overcomes the air pressure, if nucleation can occur (and this is almost always the case in everyday ife) the water will start to boil, part of it will be converted into vapor and the pressure will rise again. Now the external pressure will be equal to the vapor pressure and water won't be able to boil anymore.

At a certain point, if the container doesn't break because of the high pressure, you will reach water's critical point at $374$ °C - $218$ atm. Above this point, water will cease to exist as two separate phases and a single gaseous phase will be present.

Not the answer you're looking for? Browse other questions tagged thermodynamics water evaporation humidity or ask your own question.

11
Is there a state beyond gas?

3
What actually makes boiling happen?
0
Vapor ratio vs Gas Ratio (Internal energy in container with VLE mixture)
1
Is water vapor in a metastable state at 1 atm and at room temperature?
1
Definition of boiling point of water
6
What causes the milk to suddenly rise up & spill out if not stopped?
0
Evaporation and boiling: are they the same thing when only one substance is involved?