What is the explanation of the glory (optical phenomenon)?

Yesterday, I took the following picture. I was looking downwards from within an aircraft and I saw the 'glory' around the shadow of the plane on the clouds below. 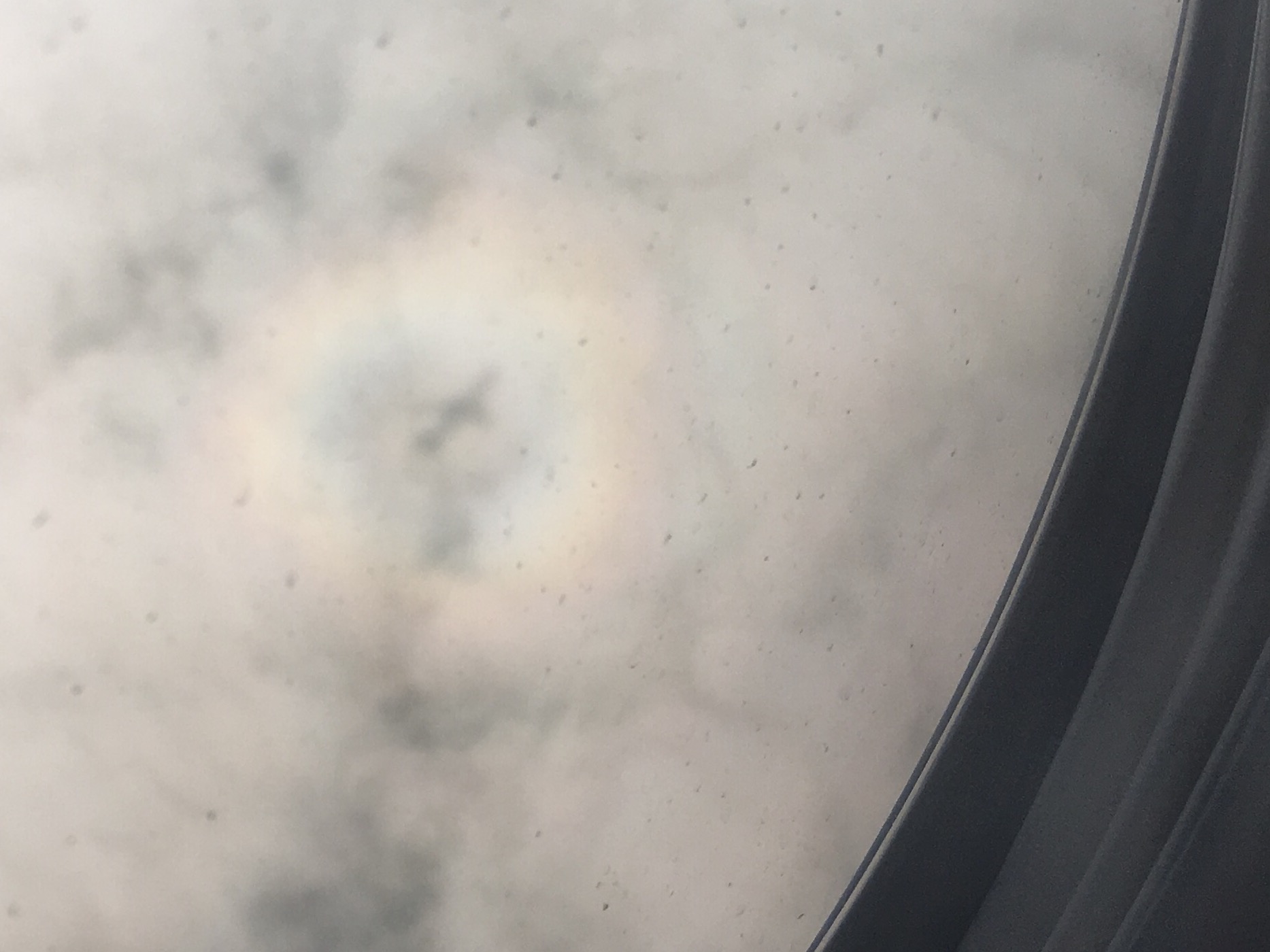 Wikipedia has an entry on the phenomenon, which states:

The scientific explanation is still the subject of debates and research. In 1947, the Dutch astronomer Hendrik van de Hulst suggested that surface waves are involved. He speculated that the colored rings of the glory are caused by two-ray interference between "short" and "long" path surface waves—which are generated by light rays entering the droplets at diametrically opposite points (both rays suffer one internal reflection). A new theory by Brazilian physicist Herch Moysés Nussenzveig, however, suggests that the light energy beamed back by a glory originates mostly from classical wave tunneling, which is when light rays that missed a droplet can still transfer energy into it.

This latest theory was published in 2002. What is the (currently) predominant theory, or is the explanation still under dispute?

NB: The Wikipedia article on a related effect known as Heiligenschein states that 'The glory creates a similar halo effect by a different mechanism.' So, according to Wikipedia, it is not Heiligenschein.

There is also a paywalled article ('The Science of the Glory', by HM Nussenzveig, Scientific American, 1 January 2012), which states in its abstract:

On a daytime flight pick a window seat that will allow you to locate the shadow of the airplane on the clouds; this requires figuring out the direction of travel relative to the position of the sun. If you are lucky, you may be rewarded with one of the most beautiful of all meteorological sights: a multicolored-light halo surrounding the shadow. Its iridescent rings are not those of a rainbow but of a different and more subtle effect called a glory. It is most striking when the clouds are closest because then it dominates the whole horizon.

Similarly, in its page on the subject, the website Atmospheric Optics attributes the formation of glories to the presence of surface waves during reflection and refraction, but then goes on to claim that

The glory is still not fully understood, this explanation is incomplete - but we are getting there.

Is this still true?

Sir Michael Berry seem to suggest that the explanation is now complete in section 6 of this paper:
Nature’s optics and our understanding of light published in 2015 in the journal of Contemporary Physics:

"It took several centuries for this beautiful phenomenon to be fully understood following its ﬁrst recorded observation, because its explanation involves subtle connections between concepts usually regarded as separate"

Extracts from the text:

"First, note that since the glory appears at the edge of the observer’s shadow on a cloud, it must be a backscattering phenomenon associated with water droplets."

"To understand the true mechanism of nature’s glory, we note that although the rays do not reach the backward direction for water, they get close."

"To accommodate the 14° shortfall, some of the emerging light gets trapped into a surface wave that creeps around the surface of the droplet, radiating tangentially"

"The exponential angular decay is a dominant feature, described analytically in terms of complex angular momentum: an unexpected application to this natural phenomenon of the Regge poles (complex angular-momentum singularities) devised to explain the quantum scattering of elementary particles."

"The intensity vanishes for large droplets because the focusing enhancement is cancelled by the evanescence (decay during the 14° skip) and also for very small droplets, where the focusing is softened by diffraction. That is why the glory is observed in the small droplets occurring in clouds or mist, but not in rain where the droplets are bigger.

"Summing up: the glory is a focusing effect that vanishes in the geometrical-optics limit."

I am not sure if that it is the agreed upon complete explanation though...

First thing to know is that either the object projecting the shadow or the shadow itself have nothing to do with the formation of the effect. As we shall see below, the fact that the shadow is always at the center of the circle is a result that the light rays are backscattered in the direction of the observer.

The glory is not a full circle rainbow. A full circle rainbow also is centered at the shadow of the observer however its angular diameter is $84^\circ$ whereas the angular diameter of the glory is less than $20^\circ$. Unlikely the rainbow the glory cannot be explained just in terms of geometrical optics. There are of course reflections and refraction playing a role but there is also a big role played by diffraction.

The first attempt to an explanation was given by Fraunhofer who suggested the light coming from the Sun is diffracted by foremost droplets in the cloud (those near the head of the observer) and then simply reflected by the inner portions of the cloud (those ahead of the observer). The net result would be a reversed optical corona. However this cannot be true since there are fundamental differences between the glory and the corona, such as the light intensity distribution (as shown by B.B. Ray in 1923) and the light polarization of the rings. Ray tried to apply only geometrical optics but even considering multiple reflections he could not be able to explain the glories since the intensity of the backscattered light would be too small.

In 1947 van de Hulst proposed a mechanism that might explain glories. I basically explains how a plane incident wavefront is transformed into a curved wavefront after emerging the droplet. The figure below show an incident plane wavefront $a$ refracting, reflecting and emerging a droplet as a curved wavefront $b$. The latter has a virtual focus point F, which by axial symmetry turns out to be a ring. Therefore the backscattered light emerges as a toroidal wavefront. Van de Hulst proposed that that the glory emerges as an interference pattern of these toroidal wavefronts. 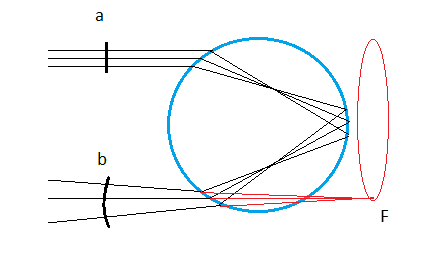 As well as for the corona, the angular size of the glory depends on the size of the droplets in the atmosphere (order of few microns) as well as the composition of these droplets. Therefore, glories can be used to determine atmospheric properties of other planetes.

The major issue with Van de Hulst's explanation is that the refraction index of water (around $1,33$) is not large enough to result in a backscattering. There is $14^\circ$ missing as can bee seen in the left of the figure below. The red line is the actual path of the ray and the black line is a impossible backscattered path.

Van de Hulst suggested that this $14^\circ$ missing could be overcame if the wave travels in the surface of the droplet in the regions nearby the reflections (both external and internal reflections) as indicates the right figure above. The problem with this idea is that these surface waves decay exponentially and by losing too much energy, the backscattered ray would be too weak.

Philip Laven proposed a mechanism to explain the interference pattern. Light waves penetrating the same droplet would go through different paths (as surface waves) along the the droplet and be backscattered with a different phase originating a series of maxima and minima.

In the late 20th century Nussenzveig et al. proposed that classical tunneling could energetically reinforce the waves traveling in the droplet. The evanescent field of a wave close but outside to the droplet would couple with the wave traveling inside and therefore transfer energy to it. This tunneling effect is possible since the size of the droplet is compared to the wavelength (and therefore it does now happen in rain droplets) and would be the "drive force" for the emerging wave. Note that in his model it is not necessary to assume the surface waves.

Nussenzveig et al. did quantitative studies comparing the three possible effects originating glories and found that the backscattering as proposed by Ray is insignificant and the the main contributions are therefore the Van de Hulst surface waves and his tunneling wave, the latter being the most dominant. According to him, glories are a macroscopic effect of classical light tunneling.

It seems that up to now there is no full understanding about the glory formation. Nussenzveig himself found this new description based on tunneling when trying to find a simpler theory given that the ones available are too complex. Maybe the present knowledge is still complicated and is hidden some more basic concepts. Apparently people are still working on the subject.

Not the answer you're looking for? Browse other questions tagged optics visible-light everyday-life meteorology or ask your own question.

13
What causes a circle of light to appear opposite the sun when looking from an airplane?
2
Did Wilson use his cloud chamber to study cosmic rays?
2
What causes the phenomena of a ring appearing around the shadow of an airplane

15
What's the origin of the flattened X that appears when of a small (but powerfull enough) light is reflected in our non-powered TV screen?
3
What is the mechanism behind the halo around LED lights?
12
Does light actually travel through glass?
14
Why is there a "blue hour" after the "golden hour"?
4
Creating a mirror reflection that appears to move faster than light
2
What will be the effect on the image formed by a mirascope if spherical mirrors are used instead of parabolic mirrors?
1
Is the shadow cast by an object hit by sunlight a sharply defined shape?