I'm programming an animation of a bouncing ball, and I want it to be as realistic as possible.

I fully understand the physics while the ball is rising and falling: It accelerates downward at 9.8 meters/second/second.

But once it hits the ground, I'm lost. I know that it experiences some compression which translates it's velocity upward again, at which point gravity is again the only force acting on it. But I don't know how to model the compression and deflection of the ball hitting the ground.

(Also, I'm only dealing with strictly vertical linear velocity and acceleration. The ball isn't traveling horizontally or rotating at all. And I'm assuming negligible loss to air resistance.)

I know there are constants to deal with: how much the ball resists compression and how much energy is lost during the bounce, but I don't know how they are related.

Can anybody give me a one- or two-paragraph explanation and/or (a) formula(e) and/or point me to a resource where I can read more? (yes, I've already spent an hour or so googling it)

I'm happy to continue reading about it until I understand, I just don't know where to turn at this point.

newtonian-mechanics forces energy simulations
Share
Improve this question
edited May 25 '16 at 22:55
cutmancometh
asked May 17 '16 at 19:12

You say you are ignoring friction of the air, but assume a partially inelastic collision. That means we can break the problem into two parts:

The coefficient of restitution is a parameter of a ball/surface, and reflects the fraction of velocity just after the bounce divided by the velocity just before. For a golf ball, this can be as high as 0.8; for a tennis ball it is around 0.75.

While the ball is in contact with the ground, we can consider its center to move in an approximately sinusoidal fashion - as I said, the important thing is that the contact time is independent of the drop height (on the assumption of linear spring constant). In reality, as the ball deforms more, the spring constant will increase - which will actually make the contact time shorter as the impact velocity is higher. But for your simulation that is unlikely to matter.

To get from the above to a "mathematical model" you might want to modify this python code to your needs:

This code produces the following plot: 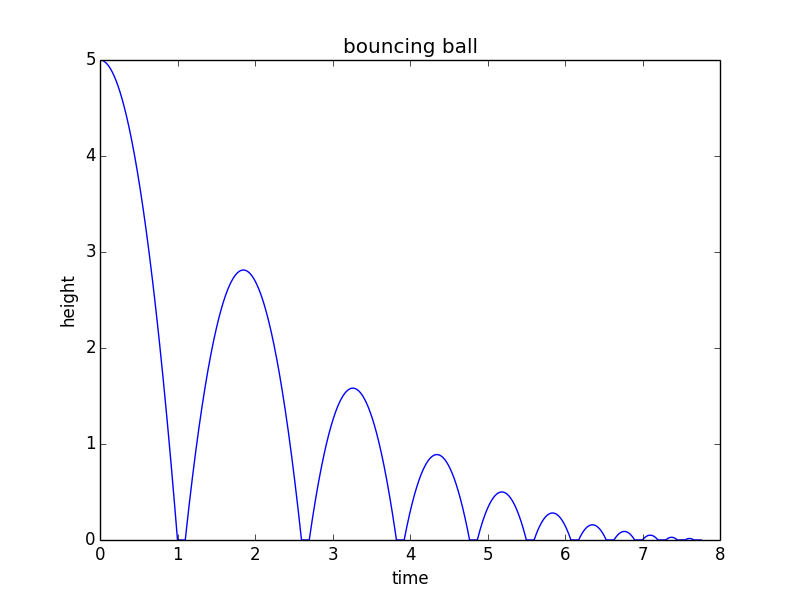 Well the difficulty is when the ball in contact with wall. Few things you can consider.

Visual Solutions (Now Altair) makes VisSim Software. Here is a demo block diagram that they have used to simulate a bouncing ball: 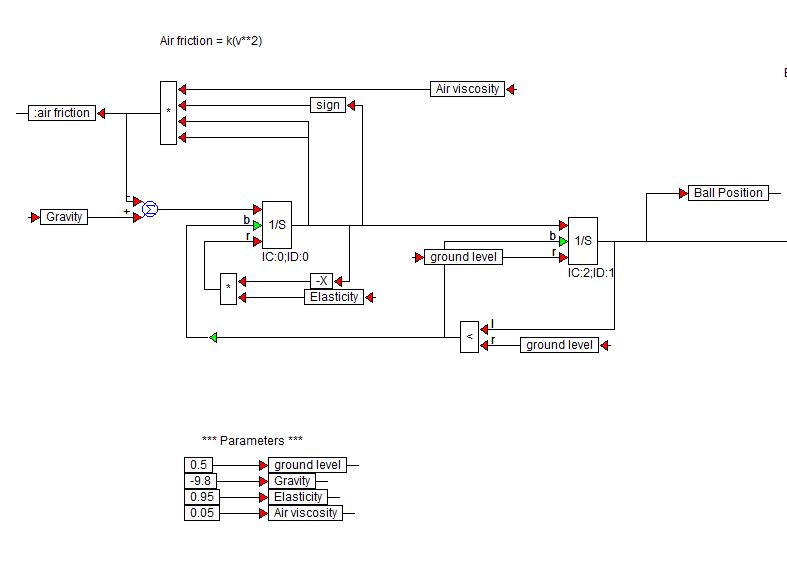 The $1/s$ blocks are integrator blocks from the VisSim library.

The plot of the bouncing ball with these parameters is shown below. 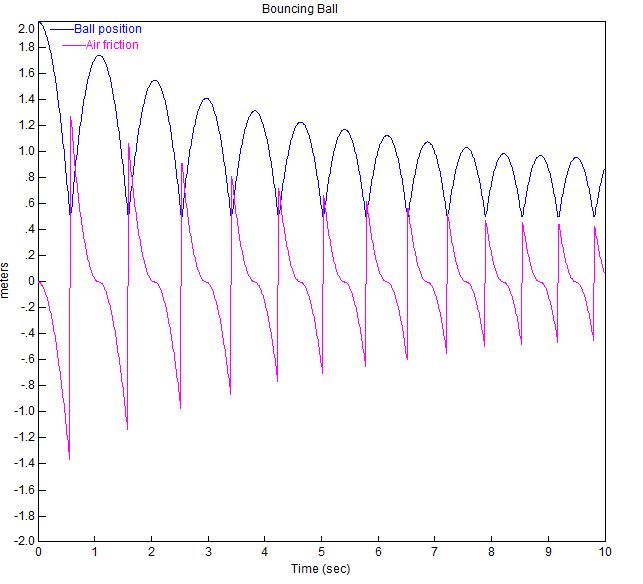 If you are interested in running this, the demo comes with the install and you can download a free 60 day trial here

Not the answer you're looking for? Browse other questions tagged newtonian-mechanics forces energy simulations or ask your own question.

0
What equations so I can model a "bouncing particle"?
-1
Why don't two objects move with the same velocity after collision?
0
Are all bounces elastic?

2
Rolling (without slipping) ball on a moving surface
2
SMBC ball bouncing problem
9
What determines whether a pool ball will bouce backwards after colliding with another pool ball?
1
Where do I thermodynamically see the energy and entropy of a ball bouncing on the ground until it stops?
1
Kinematics of bouncing ball
0
Pressure and bounce height of a ball