Does the current light pollution set a fundamental limit for the range of Earth-based telescopes?

As far as I know, all deep-sky pictures are captured with the Hubble Space Telescope.

If there would be no atmospheric distortion, could we make deeper pictures in the optical spectrum with terrestrial telescopes, say, due to bigger mirrors? Or does the terrestrial light pollution limit the range due to the signal-to-noise ratio?

I think the current answers are (somewhat) missing the OP. The issue regarding extended luminous objects, such as Nebulae is contrast, with the surrounding "darkness". Light pollution raises the brightness more or less uniformly across the entire image. One could try to estimate it, and subtract that amount of brightness from every pixel, but signal to noise effects come into play (i.e. we cannot eliminate all the stray light via image processing without introducing noise and/or processing artifacts. An obvous extreme example, is that we don't try to do astronomical observing during the day, even though bright objects, such as the moon, planets and bright stars can actually be seen.

Obviously, resolution also comes into play as well, as some of the background noise is due to the large numbers of very dim stars, which if they can't be resolved and corrected for add star noise to the background intensity level.

It's not only our own light pollution that restricts our view.

Light pollution is an atmospheric condition, or at least contributes to it - it is such conditions that affect the clarity of an image produced by a telescope, considering the light from stars must make its way through the entire atmosphere to reach our mirrors on the surface, and it's disturbances in the air that cause distorted or blurry images - the condition is termed astronomical seeing:

There is something known as the maximum useful magnification which dictates that power of magnification cannot be indefinitely increased. Each telescope has a practical limit of useful magnification, any further magnification after that won't expose any more underlying detail but will simply magnify the blurring caused by bad seeing or diffraction - to my knowledge this limit is about two times a telescopes aperture in inches. So, for a four inch telescope the limit would be around X200, and X400 for an eight inch.

Space telescopes obviously have the privilege of being removed from the interference of Earth's atmospheric conditions and so these can see much farther and with finer, sharper detail.

Naturally, 'if there would be no atmospheric distortion' then we could see better, too.

Although the Hubble is a fantastic instrument, it's most certainly not the only source of high-quality deep-sky imagery or data. Every night, there are dozens of active telescopes around the world doing good science and generating beautiful imagery. Adaptive optics has revolutionized terrestrial observing and, as you noted in your question, both aperture and instruments are easier to manage on Earth.

This is a great chance to share this wonderful image by Andrew Cooper showing the artificial guidestars of several observatories a few months ago atop of Mauna Kea: 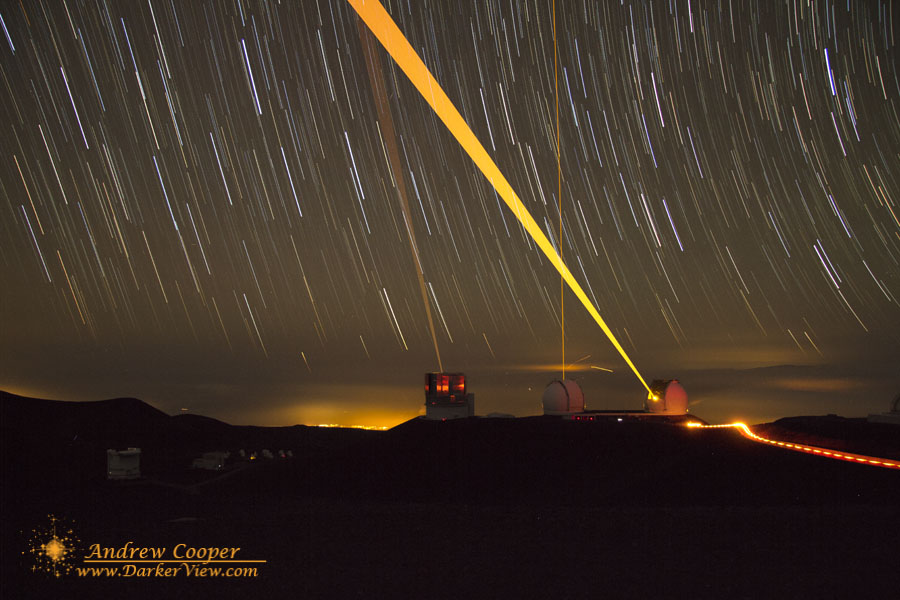 Light pollution is not just a question of nearby cities. It is the backscatter of the atmosphere which is the problem. And this means that the dust/dirt/fog in the air plays a big role. So, the zero-level is the Rayleigh scatter of clean air.

Not the answer you're looking for? Browse other questions tagged astronomy telescopes light-pollution or ask your own question.

5
Which current big Earth-based telescopes are equipped with adaptive optics?
5
Is it possible to surpass the diffraction limit for telescopes?
4
Is it possible to take a picture of a star?
1
How long does it take for pictures by Hubble to arrive on Earth?
1
Limits of zooming in (for camera/telescope)
8
What is the minimal equipment required to observe the Apollo lunar retroreflectors?
3
What light pollution levels are required to see the Milky Way?
0
What is the theoretical limit for image sensors