Now after loop correction, say $\lambda = 10$, it won't any more account for the SM Higgs mass!

But... in the SM that doesn't happen [the question asks specifically for SM, even though OP is concerned about other models in comments below]. The one-loop Renormalization Group equation is $$16\pi^2 \frac{d \lambda}{d(\ln \mu)} = 12 \lambda^2 + 12 y_t^2\lambda -12 y_t^4 $$
where $y_t$ is the Higgs-top Yukawa coupling, and the rest of Yukawa couplings and gauge group couplings have been neglected. The renormalization group equation is a first-order differential equation. So, after plugging the value of $\lambda$ at one energy scale, you can predict its value at any other energy. Usually we take that energy as the electroweak scale $\mu_{EW} \sim 100 \mathrm{GeV} \sim v$, where the spontaneous symmetry breaking occurs, and use the value you quote $\lambda(\mu_{EW}) = m_h^2/2v^2$. 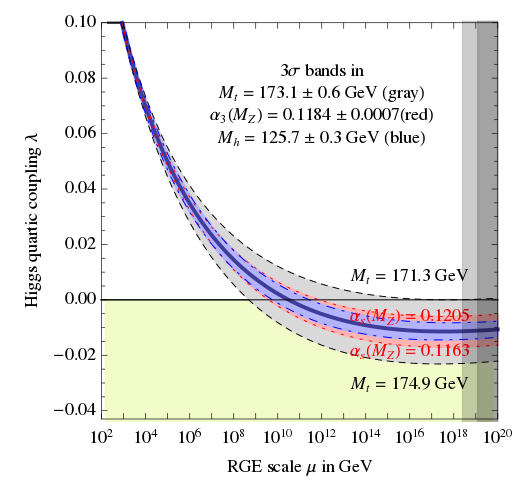 What does this mean? At large energies ($\mu \gg m_h$), $\lambda$ determines completely the Higgs potential, and if $\lambda<0$, then the potential is metastable, it can decay to a lower energy state of the Higgs field. 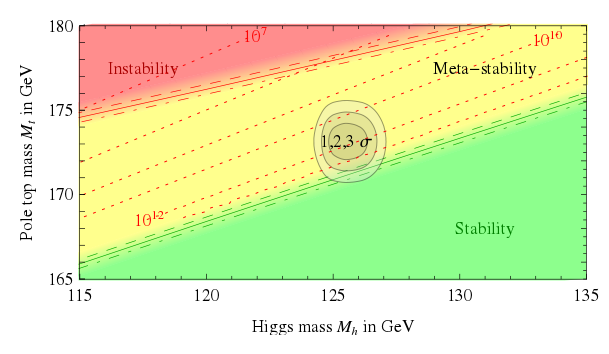 Both figures are taken from G. Degrassi et al.: Higgs mass and vacuum stability in the Standard Model at NNLO arXiv:1205.6497 [hep-ph]

Not the answer you're looking for? Browse other questions tagged quantum-field-theory particle-physics higgs or ask your own question.

6
Is a 125 GeV Higgs large (or small) for the MSSM?
4
What can drive the higgs mass in mSUGRA up?
12
Measured Higgs mass and vacuum stability
3
Lepton masses in the Standard Model
7
Why is the lightest Higgs not a free parameter in SUSY?
5
Width of the decay of Higgs boson into dimuon
0
On the mass of the Higgs Boson
3
One-loop Higgs mass in the Standard Model
3
Lowering the type-I seesaw scale without fine-tuning