Why is this particle interaction forbidden?

Why is this interaction forbidden? $$\nu_e+\bar{\nu}_e\rightarrow K^+ + K^-$$ Lepton number is conserved, charge is conserved, baryon number is irrelevant since these are mesons. Energy is conserved since we could collide these two neutrinos (and anti) at any energy required to produce the two mesons. Neutrinos only interact via the weak force so if it were possible it would be a weak decay. Parity needn't be conserved since this would be a weak interaction. The only thing that is bugging me is that quark flavour (and strangeness) is not conserved but I thought this was allowed via a weak interaction. Maybe it is momentum?

I think this process is allowed and here is my attempt at the lowest order Feynman diagram, does this look correct? 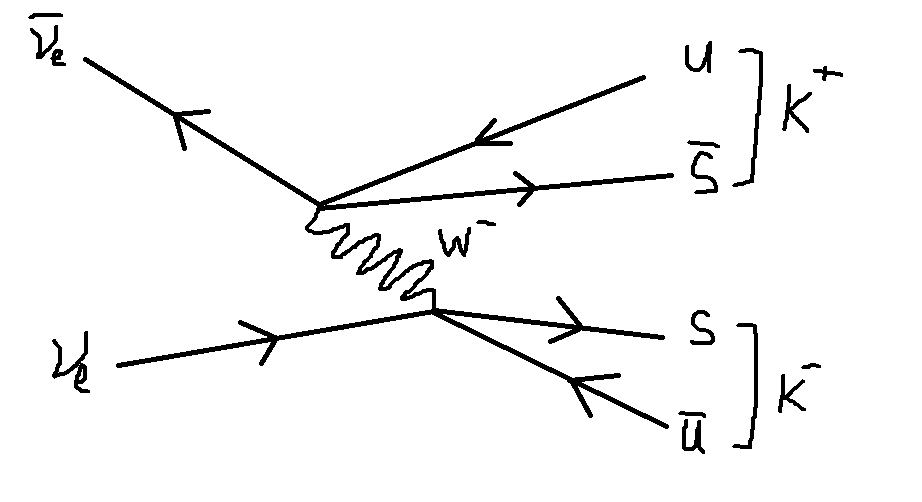 Second attempt at a Feynman diagram, following comments made.

Your first diagram is wrong, since there is no vertex in a Lorentz invariant theory where three fermions and a vector meet.

However, I don't see why you say the interaction is forbidden. It would surely be insanely suppressed since amplitudes are extremely weak, but I don't see a problem with the diagram (for instance): 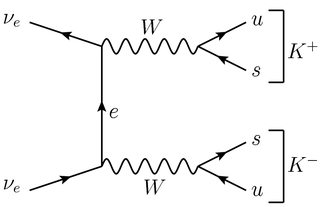 Notice that quarks mix, so the vertex $Wsu$ is there, albeit suppressed by an off-diagonal element of the Cabibbo-Kobayashi-Maskawa quark mixing matrix. The interaction is allowed.

(I just saw the second diagram you drew, which is another valid -- and even much more relevant in magnitude -- contribution to the full amplitude).

I am very bad at drawingin "paint", but the process can go as

antineutrino +neutrino to Z0 , Z0 to s antis (or up antiup), a gluon vertex from the quark to an up antiup (or strange antistrange quark) the parenthesis are the alternate diagram. ,

So it is not forbidden, it has two weak vertices and so very small cross section.

The problem with this process is, that there is no term in the standard model which allows a coupling of a fermion a W-boson and a quark-antiquark pair. Even with the neutrino having no charge, you have to take this arrow you draw on the fermion line seriously, so the fermion flow is violated at this interaction points. Furthermore you can only couple neutrinos with the presence of an electron or positron respectively (same for higher lepton families)

Not the answer you're looking for? Browse other questions tagged particle-physics conservation-laws standard-model neutrinos weak-interaction or ask your own question.

1
Reaction in Particle Physics
3
How to tell if a particle interaction is strong/weak?
4
Defining total energy in weak interaction involving a neutrino
1
Is this Feynman diagram possible?
1
How can weak interactions not conserve strangeness if the SM always conserves energy?
6
Why are the tau neutrino and mu neutrino stable?
2
Pion+ and proton make kaon+ and another strange particle, X. Why is this the strong interaction?
5
Is proton + antiproton $\rightarrow$ $\pi^0$ meson allowed?