Internal resistance of a cell

I'm a pre-university student, during the lesson of internal resistance r, there's actually resistance in battery or a cell, and if we were to connect it up in a simple set up as below: 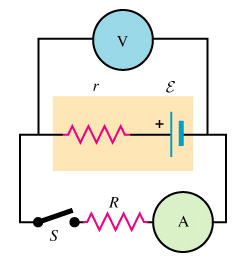 The situation I would like to mention here is when the switch is open. From what I have learnt in my reference book, it said that there's no current flowing when the switch is opened and the value of the voltmeter shows is the emf of the cell. Besides, we know there's actually a little of current flowing through the voltmeter which has high resistance otherwise the pointer of voltmeter will not deflect. In other words, what I'm trying to ask are :

electric-circuits electric-current electrical-resistance
Share
Improve this question
asked May 12 '16 at 8:35