Why does a system try to minimize its total energy?

Why does a system like to minimize its total energy? For example, the total energy of a $H_2$ molecule is smaller than the that of two two isolated hydrogen atoms and that is why two $H$ atoms try to form a covalent bond. According to the classical mechanics, it is the potential energy of a conservative system that is minimum in equilibrium, not the total energy.

The anthropomorphic formulation "tries to" is misleading. Under the effect of ambient noise, matter explores the possible configurations around its current state: e.g., two single hydrogen atoms wiggle around and meet. If they happen to bind, this releases energy which goes away, and we say that the energetic state of this new $H_2$ molecule is lower than what we had. Unless the ambient noise or some experimentalist gives back this energy to the $H_2$ molecule, it will stay so, so there is a net bias toward these states that we describe as having a lower (free) energy.

Let's add that the traditional way to explain this bias (meaning that you need more energy, and thus have less chances, to move from a lower energy state to a higher one than the other way around), is with this schematic of a potential energy analogy: 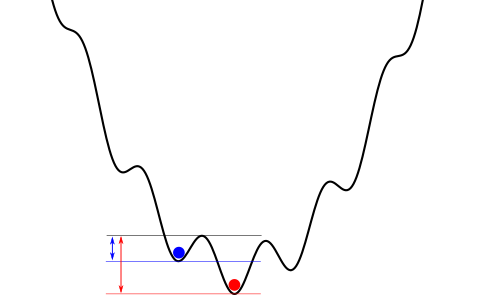 This is a consequence of the second law of thermodynamics, which states that

In a closed system with fixed internal energy (i.e. an isolated system), entropy is maximized at equilibrium.

It can be shown that this statement is equivalent to the following:

In a closed system with fixed entropy, the energy is minimized at equilibrium.

Callen in his book gives the following argument (chapter 5):

Assume that the system is in equilibrium but that the energy does not have its smallest possible value consistent with given entropy. We could then withdraw energy from the system (in the form of work) maintaining entropy constant, and we could thereafter return this energy to the system in the form of heat. The entropy of the system would increase ($\delta Q = T dS$), and the system would be restored to its original energy but with an increased entropy. This is inconsistent with the principle that the initial equilibrium state is the state of maximum entropy! Hence we are force to conclude that the original equilibrium state must have had minimum energy consisted with the prescribed entropy.

This is really a statistical effect, as pretty much all of thermodynamics.

You have two free hydrogen atoms. They tend to move around the space they have, and when conditions are favourable (there's enough energy, the atoms come "close enough" together), they might interact - chemically or otherwise.

Now, "enough energy" is the important bit here. When a hydrogen atom meets another hydrogen atom, they have a lower energy state available. That is, without adding any external energy (e.g. from the relative motion of the two atoms), there is another state they can occupy (the hydrogen molecule) while releasing energy to the environment (usually as EM radiation).

In reality, most reactions run in both directions simultaneously and many different reactions occur in the same mix of chemicals. For example, carbonated water will tend to have ongoing reactions that convert water and carbon dioxide to carboxylic acid and vice versa - the concentration of the acid will tend toward an equillibrium where the forward reaction and the reverse reaction happen at the same rate. But they're still happening. However, note that this happens because the system not only loses energy, but gains it as well - the equillibrium happens when the amount of outgoing energy is equal to the amount of incoming energy. If that's not the case, the reaction becomes non-reversible over time as total energy is lost to the environment.

This applies to all thermodynamic systems. Imagine a ball bouncing off the ground. If the bounce is perfect, no energy is dissipated to the environment, and the ball will keep bouncing forever - it will just keep changing kinetic energy to gravitational potential energy and vice versa. There's no "minimization of total energy" - the energy of the system is simply conserved. But as thermodynamics teaches us, you can't make a system that's perfectly closed. And as soon as energy starts to "escape" the system, you'll find the ball starts bouncing lower and lower until it comes to rest. The energy was lost to heat, sound etc., and is no longer available to push the ball back up.

I'm going to take a slightly different approach and say it's because we defined energy to make it so. In other words, systems "try" to find the lowest energy state because energy is a concept humans invented in order to describe what we observe.

This is the reason that for any given set of constraints, you might need a different "energy" to describe the behavior of the system. In quantum mechanics, it works out that what we call energy (as given by the energy operator) is minimized. In classical mechanics, we refer to potential energies to distinguish between the myriad other types of energies that can be defined for a system, and choose definitions for them so that the potential energy (gravitational, thermodynamic, etc) is minimized.

In the end, what it means is that for a given state of the system, you can define a function that gives you a value relative to a lowest energy (ground) state. We define this function in such a way that it tells us which state is more likely to occur, and we do this by observing physical laws.

In that sense, it is a little bit backwards to say that a system "tries" to reach a minimum in energy (ignoring the problems inherent to anthropomorphism), since the system is just doing what it does, and we are using energy as a way of understanding that.

Energy is a secondary concept, at least in Newtownian mechanics, so let's start with the fundamentals.

There exists a force field. A gravitational one, say. An object in this field feels a force. This force "wants" to make the object accelerate.

From forces, define work as $force \times distance$ and now we can give precise mathematical meaning to the intuitive concept that "it takes work to lift this ball from the floor to the table".

From work, define energy. Energy is how we keep track of all the work that we did. When we say "the ball has $x$ Joules of kinetic energy" that's a way of saying "some force acted upon the ball, doing $x$ much work, and now because of that force the ball has accelerated to the given velocity".

So let's answer the question: "why does a system like to minimize its total energy?" First we have to clarify the question, we have to nitpick about what "the system" is because when lifting a ball from the floor to the table I have apparently increased its energy, contradicting the premise. I think you mean "why does a system like to minimise its potential energy?" Potential energy exists because the force exists -- the ball potentially will fall back to the floor, if it is allowed to; gravity will do work on the ball as it falls and this will manifest as kinetic energy. So saying "the ball wants to minimise its potential energy" is basically saying "the force of gravity exists".

But if the ball actually is allowed to fall, we're trading potential energy for kinetic energy, and the total energy of the system is constant. If it bounces with perfect elasticity and there is no air resistance etc, it will return to its initial configuration: no energy change. In practice, the bounce will be slightly elastic, work will be done agitating the molecules into motion (heat, sound, etc) and so not all the energy will be returned to the ball in the bounce, so the energy of the (no longer closed) system will tend to decrease.

Not the answer you're looking for? Browse other questions tagged quantum-mechanics classical-mechanics statistical-mechanics equilibrium dissipation or ask your own question.

34
Why does a system try to minimize potential energy?
2
Why physically do things in general tend to move toward a lower potential value in a potential field?

2
Potential Energy in a System and its Relation to the Total Energy
2
When dihydrogen is formed, are photons being emitted?
4
What is the physical significance of the overlap integral?
0
Are individual atoms inside a molecule (covalent) still really EM neutral?
1
A proof that internal non-conservative forces cannot change the total energy of an isolated system
1
Why can't a system reach equilibrium with non-interacting particles?
1
Why Does Molecular Potential Energy Curve Have That Specific Shape?
2
Conflict between a system lowering its potential energy and kinetic energy