Spring pendulum - why is it possible to use this equation?

It is known that, when we describe the spring pendulum, we are bound to use the formula $T = 2\pi \sqrt{m/k}$, however, we can go further and set
$\omega = \frac{2\pi}{T}$
I ponder why is this substitution legal, because there is no angular motion in this pendulum!

newtonian-mechanics harmonic-oscillator frequency spring
share|cite|improve this question|||||
edited May 10 '16 at 19:08

The angle which is being measured here is the phase angle, which describes how far through the cycle the oscillation has gotten, as though the oscillation is moving round in a circle at a constant angular speed $\omega$.

You might well be confused because you cannot see any angular motion in the 'spring' pendulum. But it is even more confusing when dealing with the 'string' pendulum because here the displacement is measured by an angle $\theta$, but this angle is not the same as the phase angle (which is usually called $\phi$, the Greek phi for phase). The angular speed is $\large{\frac{d\theta}{dt}}$, which is normally called $\omega$, but this $\omega=\large{\frac{d\theta}{dt}}$ is not the same as the angular frequency $\omega=\large{\frac{d\phi}{dt}=\frac{2\pi}{T}}$. Angular speed varies during the oscillation, from $0$ at the extremes to the maximum as it passes through the vertical. But angular frequency does not change during the oscillation, it is a constant for ideal string or spring pendulums, depending on $\large{\frac Lg}$ or $\large{\frac km}$. 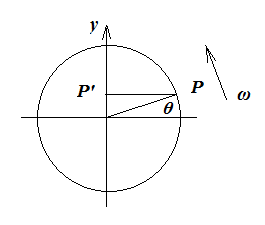 Imagine a point $P$ moving on a circle of radius $R$ with angular velocity $\omega$.

The point $P'$ is in simple harmonic oscillation (SHO).

For the spring mass system it just so happens that:

So although there is no angular motion in the spring mass SHO, in analogy with the SHO of point $P'$ we still call it the angular velocity.

where $x$ is the displacement from a fixed point and $a$ is the acceleration.

This equation is of the form $a=-\omega^2 x$ where $\omega$ is a constant of the simple harmonic motion.

A possible equation for the displacement of the mass as a function of time $t$ is $x= \sin \omega t$.

Since angles are usually measured in radians and time in seconds the unit of the constant $\omega$ is radian per second.

So in this case the motion of the mass is linear and the reason why the unit of angle, the radian, crops up is because of the sine function being part of the equation for displacement.

Your confusion is probably due to the fact that you have met the same symbol $\omega$ as the angular speed which also has the unit radian per second and the same equation $T=\frac{2\pi}{\omega}$ when dealing with circular motion.

Not the answer you're looking for? Browse other questions tagged newtonian-mechanics harmonic-oscillator frequency spring or ask your own question.

0
Why are there two ways to solve for energy of a spring?
3
How to derive the period of spring pendulum?
2
Free body diagram when forces are not directly in contact with the object
0
Pendulum spring: obtain expression for maximum speed
0
Trouble with equation of motion for a damped pendulum?