I remember from watching Cosmos years ago, Carl Sagan suggested an interesting hypothetical method for directly seeing exoplanets. He proposed that in the 'future' we could launch a satellite designed to block the light from distant stars, effectively eclipsing them, perhaps by unfolding a large circular parasol, allowing a powerful telescope to directly detect the light from nearby orbiting planets. Based on this notion I have two questions:

Related: Lack of exoplanet missions in the decadal survey, and Given a photo of the Moon, taken from Earth, is it possible to calculate the position of the photographer's site?

Scientists can image exoplanets today, using coronagraphs and other techniques: The major difference from Sagan's speculation are the advances in adaptive optics that allow terrestrial observatories to perform in ways that vastly exceed the expectations of Sagan's time.

Space-based observatories are awesome, but the sheer size of these instruments is daunting. This is Gemini Observatory's Near-Infrared Coronograph Imager (NICI), which is just the instrument (never mind the 8M primary mirror). You can get a sense of the scale from the railings and instrument panels: 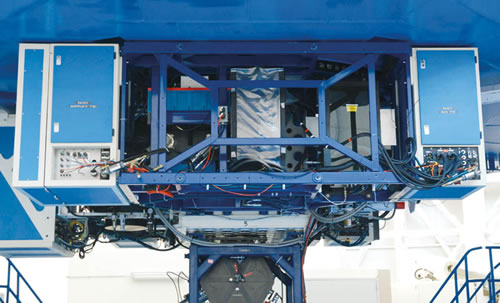 Exoplanets are, of course, a very exciting area and all the major observatories are bringing even better instruments online. At Gemini (at which I work, but do not speak for), we are very excited about bringing online next-generation instruments that will allow even greater science to be done.

A shade used to block out a bright source in order to image a dim source right next to it is called a coronagraph. They are [EDIT: modestly sized] screens attached to the telescope itself, not [EDIT: huge] devices deployed far from the telescope. These are being used already, originally for observations of the Sun's corona (hence the name) and are starting to be used for direct exoplanet imaging. In the original version of this answer, I assumed that coronagraphs were tiny and placed next to the focal plane of the instrument, but apparently they are somewhat larger and placed above the objective. Whoops.

Rereading your question, it looks like Carl Sagan basically had a spooky da Vinci-like accuracy in predicting this, although I misread your question and thought (he was)/(you were) talking about just a parasol in space, with telescopes on the ground focusing on the image around it. With that in mind...

Deploying some large parasol in space solo to detect exoplanets doesn't make sense in the modern day. The only way that this strategy would make sense is so long ago that space telescopes and adaptive optics were the realm of science fiction. (They were proposed decades before they were actually realized.) Thus one could only conceive of directly blocking the light from an exoplanet's parent star with a huge, precisely positioned screen high above the Earth's atmosphere. Below the atmosphere, twinkling would render any such screen useless, because the star and planet both would jitter in and out of the blocked area, rather than the star staying within and the planet staying outside. You would need a big screen in space in order to cover a large enough area for a ground-based telescope.

As some have noted, coronagraphs acting as "internal starshades" have been studied and demonstrated in the laboratory extensively. Still, the problem is very difficult, as observing a planet around a star in visible light requires blocking out 10 Billion photons for every one photon from the planet.

The "parasol" approach, now called external occulters or Starshades have also been studied. They offer a number of advantages over internal coronagraphs, but also their own challenges. Read more at Exoplanet Exploration Program website.

And yes, we still plan on using large deployable sun shades as part of the terrestrial planet finder mission. An example is here

Such a method is actually a little more complex than it may seem at first glance, since light is a wave and will create an interference pattern due to the edge of the shade. Also, it's much less flexible than other deep nulling systems such as coronagraphs and interferometers, since it requires two widely separated spacecraft (the shade and the telescope) and repositioning to acquire a new target is very non-trivial.

That said, the idea does have a lot of promise, and has been explored in the New Worlds Mission concept.

Not the answer you're looking for? Browse other questions tagged telescopes exoplanets imaging space-mission or ask your own question.

20
Given a photo of the Moon, taken from Earth, is it possible to calculate the position of the photographer's site?
6
Lack of exoplanet missions in the decadal survey

8
Is a rogue 'exoplanet' classed as a exoplanet?
4
Future space-based telescope array
9
Word for the star around which an exoplanet orbits:
1
Non-discoveries by the Kepler space telescope: exomoons, co-orbital planets, trojans
3
Exoplanet Mass-Radius Diagram
2
Calculating the eccentricity of an exoplanet
0
Can Neutrinos be used in space telescope?