What does ionization of neutral Hydrogen have to do with “transparency”?

Most accounts of the early history of the Universe make some reference to (re)ionization as being the reason that the Universe becomes transparent after a period of opacity caused by the absence of ionized hydrogen. These accounts suggest that neutral H is opaque, wile ionized H is transparent. But I don't follow the reasoning.

I understand that, while neutral H is primarily absorbing at a single relevant wavelength, those wavelengths are "smeared out" by expansion, as seen by an observer, so that a dense and nearly continuous neutral H at a large range of redshifts would result in absorption at a corresponding wide range of wavelengths (i.e. "opacity" at those wavelengths, as seen by an observer "on the other side" of the absorbing intervening H). But I'm not clear on why ionization of the same H, alone, would result in clearing up this opacity.

There is a lot of confusion on this issue, and indeed plenty of textbooks have got their terminology mixed up. The brief story of the opaqueness of the universe is as follows: 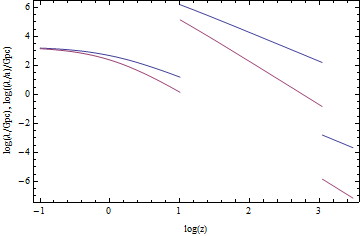 Time goes from right to left. As you can see, the jump caused by reionization is countered by the increase that occurs between recombination and reionization. Once the first stars reionized the universe, the mean free path was still a gigaparsec ($10$ comoving gigaparsecs), enough for the universe to be considered transparent.

1 Not to be confused with matter-radiation equality, which occurred earlier and denotes the transition from when the gravitationally dominant components of the universe were relativistic to the dominance of non-relativistic matter in determining the evolution of the universe.

The first phase change of hydrogen in the universe was recombination, which occurred at a redshift z = 1100 (400,000 years after the Big Bang), due to the cooling of the universe to the point where the rate of combination of an electron and proton to form neutral hydrogen was higher than the ionization rate of hydrogen. The universe was opaque before recombination because photons scatter off free electrons (and, to a significantly lesser extent, free protons), but it became transparent as more and more electrons and protons combined to form hydrogen atoms. While electrons in neutral hydrogen (or other atoms or molecules) can absorb photons of some wavelengths by going to an excited state, a universe full of neutral hydrogen will be relatively opaque only at those wavelengths, and transparent over most of the spectrum. The Dark Ages start at that point, because there are no light sources yet other than the gradually darkening cosmic background radiation.

The mean-free path of photons was always very low when temperatures were so high that they could barely travel anywhere before they scattered off free electrons (electrons off ionized atoms). Once temperatures cooled down, though, the mean free path of the average photon increased to the point where it could expect to travel across the entire universe without getting scattered off by a stray free electron (and we got http://en.wikipedia.org/wiki/Free_stream).

There is one question I do have though: do non-ionized electrons occupy less "space" (on average) than ionized electrons? Hydrogen atoms only have 1 electron, after all, so you're not going to see electrons clumped around atoms. If this question has an answer of "yes", then the above explanation can be easily understood.

Before the time when the universe first became neutral (recombined) at z approximately 1100, the ion density was very high so that the mean free path of light photons was small enough that you could consider the universe as opaque. This opacity is what we see when we look at the Cosmic Microwave Background (CMB). After the recombination, the universe was transparent to visible light, but 'rapidly' (a million years or so) became dark as the CMB radiation was redshifted into the infrared. It stayed dark (in visible light) until the first stars formed. These stars also re-ionized the universe, a process that was completed by redshifts of 10-20, a few hundred million years after the Big Bang. But this time, the universe stayed essentially transparent because with the scale factor increasing by a factor of about 100, the density of the universe had decreased by a factor of a million, and the opacity varies as the square of the density.

So, the universe, with the exception of dense dust clouds, has been transparent to visible light ever since the recombination at the time of the CMB. But there is an important issue when we try to look back to that time in visible light or the near infrared (as with Hubble). That is, the neutral hydrogen which dominated from z = 1100 to z = 10-20 is strongly opaque to far ultraviolet light. First there are a series of absorption lines, called the "Lyman Series" (see wikipedia), starting at wavelengths 121.6 nm (nanometers) where the sole electron in a hydrogen atom is kicked from the ground state into various excited states, followed by the Lyman continuum, starting at 91.2 nm whereby the electron is kicked out completely, temporarily ionizing the atom. So, a universe of neutral hydrogen is opaque at wavelengths less than 91.2 nm. But look back to redshifts of 9, and that limit becomes 912 nm, well into the infrared. So Hubble becomes stymied at redshifts much greater than this. Indeed, the Lyman series of absorption lines starting at 121.6 nm has long been, using ground-based telescopes, from remnants of neutral hydrogen clouds along the lines of sight from very distant quasars, and dubbed the 'Lyman forest' in these spectra.

So there is a second meaning to 'dark ages' when considering our present attempts to look back into the neutral era. The James Webb space telescope is designed with far infrared detectors to probe back into the 'dark ages' to see what was emitted from the earliest stars as visible light.

Ionized plasma is highly opaque, because there are so many electrons not bound to atoms and they can take on nearly energy level (and thus able to absorb photons of almost any energy). It is also typically highly luminous due to being at a very high temperature. The Cosmic Microwave Background represents viewing the super-heated plasma of the early Universe, specifically the boundary (in time) between that era and the era when the Universe cooled enough to cause most ionized atoms to combine back to neutral forms (which are more or less transparent). However, there were periods of small-scale re-ionization which add small perturbations to the CMB.

Not the answer you're looking for? Browse other questions tagged cosmology universe galaxies spectroscopy hydrogen or ask your own question.

5
A photon travels in space for 10 billion years. What are the odds it will arrive here without interacting with a atom on the way?
7
How do photons carry information?
2
Why did recombination make the universe transparent?

0
Photon propagation direction prediction possible after interacting with neutral hydrogen?
1
Intensive radiative heat transfer in very hot gas ( >5000K, gas core nuclear reactor related )
0
What volume does have the Planck mass of hydrogen at normal conditions?
6
Why is CMB not considered as the edge of the universe?
1
How is hydrogen able to emit a light spectrum with only one electron?
5
What is the current measured (i.e. model independent) density of hydrogen $H$ in the universe?
0
Hydrogen atom ionization energy and infinity
1
Transparency of hydrogen to different electromagnetic wavelengths in the early universe