As per, http://en.wikipedia.org/wiki/Four-velocity, we can define four-current density as: $J = \rho_0 U$, where $U$ is the four-velocity. Since it's a scalar times a four-vector, it's another four-vector.

Now it remains to show that this fits the definition you gave:

Total charge is the same in both frames (why? we define charge as being measured in the rest frame, making it invariant).

so that takes care of the first relation. The second relation $$\mathbf{J} = \rho \vec{v}$$ just follows from the definition of current density. Going back to our infinitesimal volume of charge, suppose the charge crosses some boundary perpendicular to the x-axis over some time $\Delta t$. $$I = \dfrac{Q}{\Delta t} = \dfrac{\rho \Delta x \Delta y \Delta z}{\Delta t}$$ Cross sectional area $$A = \Delta y \Delta z$$ So magnitude of current density = $\dfrac{I}{A} = \dfrac{\rho \Delta x}{\Delta t}$. Taking infintesimals we get $\rho \left|\left|\dfrac{dx}{dt}\right|\right|$. Multiply this by a unit vector in the direction of motion and we get $$\mathbf{J} = \rho \vec{v}$$ 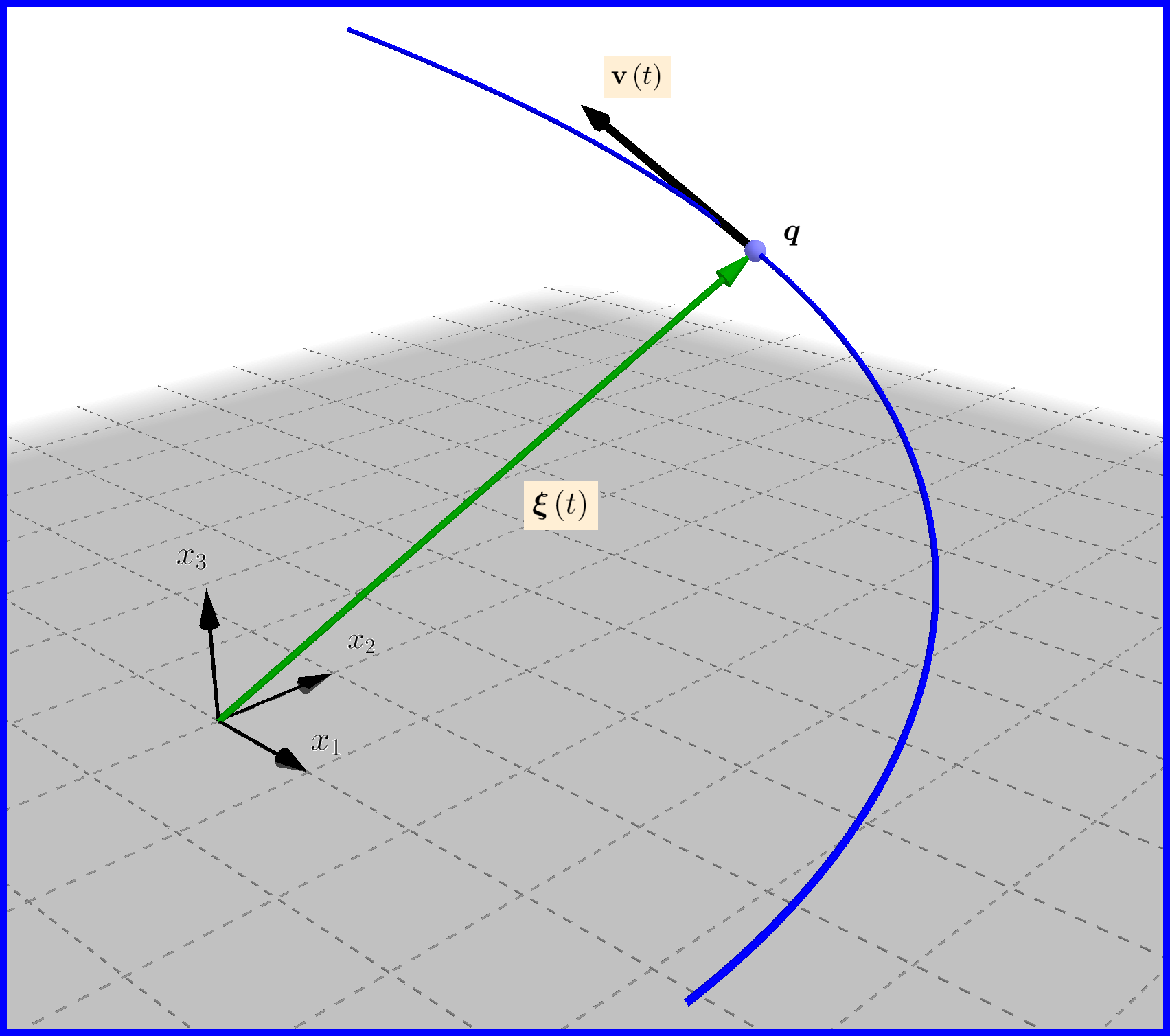 I use other symbols in order to prevent confusion in the following.

Let a point charge $\:q\:$ moving with position vector $\:\boldsymbol{\xi}\left(t\right)\:$ as in above Figure. Then the volume charge density and the charge current density are expressed via Dirac $\:\delta$-function as follows

Here is a quick (standard) proof of the quotient rule in the context of the four-current being Lorentz covariant, as mentioned by @SebastianRiese. We assume that in any inertial frame (where the metric is Minkowski, as expressed in the coordinates we are using) the physical continuity equation holds:

Knowing that the partial derivatives $\partial_{\mu}$ do transform as Lorentz vectors, we write the continuity in a suggestive form.

where as usual I have defined:

What is important to remember here is that although we know how the derivative four-vector changes under general coordinate transformations (among them Lorentz transformations), we do not yet know how this four-component $J^{\mu}$ changes under coordinate transformations - i.e. we do not really know if it is actually a four-vector. We do know that under general under rotations $\vec{J}$ will physically transform as a Cartesian vector and $\rho$ a Cartesian scalar, but it is not immediately obvious that under boosts $\vec{J}$ and $\rho$ will mix as they would if they were unified into the four-vector $J^{\mu}$ from (4).

Now we Lorentz transform to another inertial coordinate system, where the continuity equation is now:

where in passing from the first line to the second I have used that Lorentz transformations are constant in coordinates. This implies the transformation rule for $J^{\mu}$:

Not the answer you're looking for? Browse other questions tagged homework-and-exercises special-relativity vectors inertial-frames covariance or ask your own question.

12
How do we prove that the 4-current $j^\mu$ transforms like $x^\mu$ under Lorentz transformation?
5
Point charge 4-current derivation

3
Momentum vector transformation
0
Integral Represation of Four Current with proper time
1
How does one show Maxwell's equations in vector calculus form describe the same motion in all reference frames?
4
Covariant formulation of electrodynamics
0
$\Delta x^{\alpha}\equiv x_{2}^{\alpha}-x_{1}^{\alpha}$, the difference between two points, is not a vector
2
Does it make sense to ask how the covariant derivative act on the partial derivative $\nabla_\mu ( \partial_\sigma)$? If so, what is the answer?
1
Why is the 4-velocity vector an absolute quantity?
0
Lorentz covariance of Pauli-Lubanski pseudo-vector