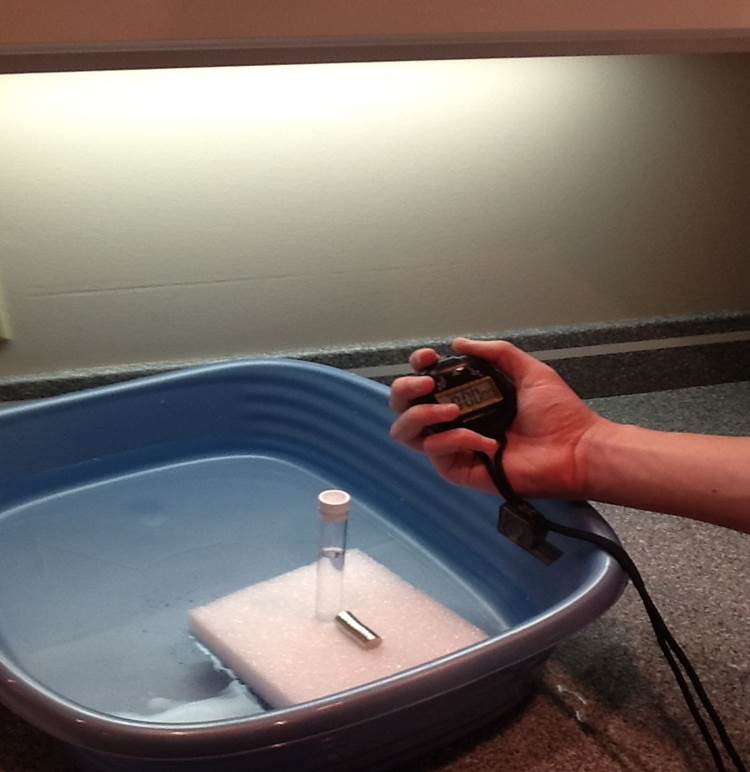 There is a demonstration in the following video :
https://www.youtube.com/watch?v=jyqOTJOJSoU.
It does not have the magnet resting on the Styrofoam as in your photo. The difference is that I can see what is happening and it is explainable. It does not break any Laws of Physics.

If your magnet is resting on the Styrofoam when it moves, then it is hard to believe that the magnet is doing the pushing. That would clearly break the Laws of Physics. However, I cannot see any evidence in your photos that this does actually happen as you claim, and as far as I am aware nobody else is claiming to have seen it happen. The 1st step in explaining an observation is to confirm that it does in fact happen and in what conditions. I cannot do that here, so it is pointless to look for a scientific explanation of how the magnet can make the foam move by pushing on the tube of water when both are resting on the foam.

A simpler explanation is that you are breathing on the Styrofoam, which (as the video shows) takes very little force to make it move. Or there are currents in the water which have not died out yet. Another (less likely) explanation is that there is soap on the trailing edge of the Styrofoam : https://sciencebob.com/build-a-soap-powered-model-boat/.

But I think the most likely explanation is that you have seen or heard of a demonstration such as that in the video. You have tried to repeat it but misunderstood what to do with the magnet. You have failed to get the same effect, and reported what you incorrectly remembered or heard, rather than what you actually observed when you tried the experiment yourself.

So regrettably without better evidence I must presume that Newton's 3rd Law is not violated, and that the Styrofoam moves for some other reason, not because it is pushed by the magnet resting on it.

The 'masked magician' explains that water is diamagnetic so it is repelled by the neodymium magnet. Although it seems strange that water is affected by a magnet (it isn't even metallic!), and repelled instead of attracted (as a lump of iron would be), there is no violation of Newton's 3rd Law - or any other Laws of Physics. The reaction force acts on the magnet : you notice it when two magnets are repelling each other, but here it is too weak to feel (much smaller than the weight of the magnet).

Although the force on the water is very weak (you can't feel it with your hand), the Styrofoam moves very easily while it floats on the water - even your breath can move it.

Dissolving sugar or salt in the water makes the water less concentrated (some space is occupied by dissolved sugar/salt), so the force on the water is reduced.

First of all, it depends on the way you place the magnet. Have you tried moving the foam backwards and does it change its direction and tries to oppose the forced motion? If not, the motion is probably due to the force you applied on the foam while place the test tube or the magnet.

Neodynium magnets are strong magnets so the Earth's magnetic field could be influencing in the experiment but the difference in the Earth's magnetic field between the two poles is too small to be considered so there shouldn't be any force on the magnet. The field can provide only a reasonable amount of torque but your statement that the foam moves forward rules that case out.

You can check if there is any influence of the Earth's magnetic field by orienting the magnet in different directions.

However, the presence of magnetics/metals near the apparatus (apart from the ones which are on the foam) could also influence the motion.

Repeat your experiment many times so as to make sure that there wasn't some systematic error.