Is the time dilation experiment for real?

Because of this, it would be absolutely impossible to tell which of the two clocks would be slower than the other at the end of the journey. Each clock would see the other clock as slower AND themselves as faster and therefore they would not agree on their observations. So if the experiment was really performed, then it could NOT definitely be the plane clock that was slower.

So how do you explain this anomaly, and if the experiment was really performed, then why did it yield the claimed result and not the opposite?

special-relativity time-dilation
Share
Improve this question
asked May 5, 2016 at 22:35

The first such work was the Hafele–Keating experiment, 1971. The results are summarized here. 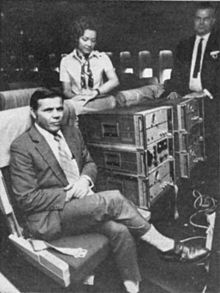 Hafele and Keating aboard a commercial airliner, with two of the atomic clocks and a stewardess.

The published outcome of the experiment was consistent with special and general relativity. The observed time gains and losses were different from zero to a high degree of confidence, and were in agreement with relativistic predictions to within the ~10% precision of the experiment.

The experiment has since been repeated with increased precision.

-1
Does time go slower as you travel in the air?
0
To Be Forever Young