How does electron makes transition from one state to another?

i am not asking why it makes. i am curious about how it makes the transition. Does it go from one state to another via straight line or it makes smaller and smaller orbits till it reaches the next orbit

quantum-mechanics atomic-physics orbitals
Share
Improve this question
edited May 5 '16 at 3:47

As phrased, this question suggests suggests a very Bohr-like image of electrons. This answer is intended to nudge you in the direction of a quantum model, but is by no means complete. Honestly, there's no way to understand QM without delving deep into the math, and even then its difficult to make a math <-> reality correspondence.

Firstly: quantum mechanics (QM) replaces point particles with definite momenta with a function (field) that is defined over all space and changes with time. This wave function ($\psi(\mathbf x,t)$) encodes the probability of measuring the electron at a given position, with given momentum: it evolves deterministically, but only tells you probabilistically what you might observe in a system.

Now, to answer your question: within the QM perspective, there is no notion of an orbit, or line whatsoever: instead, electrons of definite energy (in an eigenstate) are represented spatially for hydrogen like this: 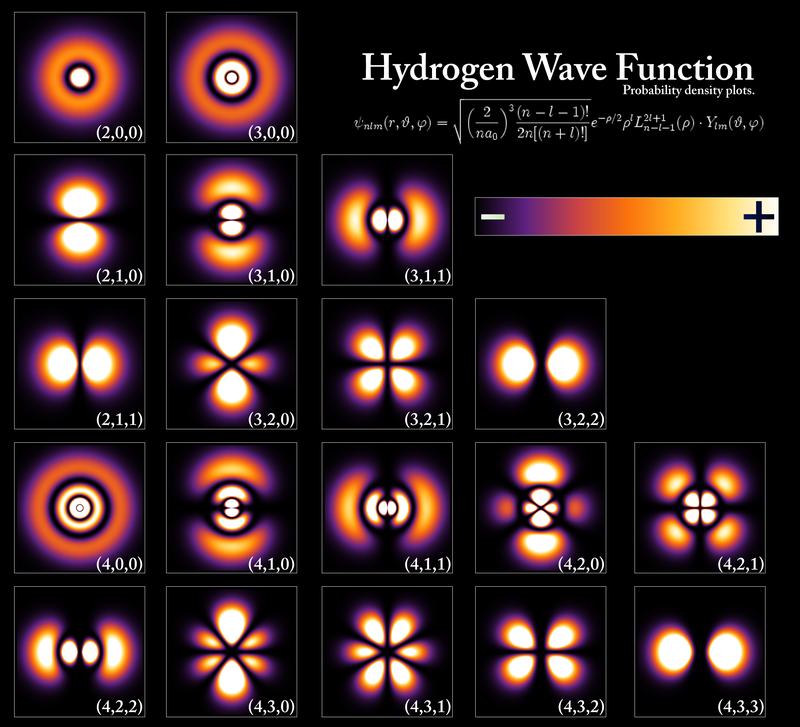 The following description glosses over quite a few details but should give you the basic idea: If you imagine some continuous wave-like transformation (think waves in a pond) from one of these 'states' to another, that represents an electron transition from absorbing or emitting a photon. There is so much more going on here, but at the conceptual level, I think this is the biggest leap you have to make: electrons are better described as waves than particles.

In the sense of probabilities, in principle the electron has a probability to exist anywhere in space. Electrons in bound states have zero probability ( infinitesimally small) to be outside the probability loci shown. For unstable configurations one has to calculate the probability distribution for the problem.

11
Does an electron move from one excitation state to another, or jump?