If we threw a baseball from the ISS, could we deorbit the ball?

Clearly this is a hypothetical question.

Say we bring a star baseball player into NASA, prep them appropriately for a mission in space, and fly them up to the International Space Station. They go on a spacewalk with a baseball, and at the apoapsis (highest, slowest point in the orbit) throw it retrograde as hard as they can. Could they decelerate the baseball enough that its periapsis (lowest, fastest point in the orbit) dips into Earth's atmosphere enough to de-orbit the ball over time?

(Let's assume that the ball must de-orbit within about 10 years or less. 10,000 years is too long. Also, let's neglect any loss in mobility that a space suit might cause.)

You don't need to throw the ball!

At the altitude of the ISS the atmosphere is thick enough that it loses 50-100m of altitude every day due to the drag. At that rate over your ten year timescale the ISS would lose 180 to 360km. When you take into account the increased drag at lower altitudes ten years is enough to bring the ISS crashing to a fiery end.

So just put the ball in your pocket and wait.

Actually this is just as well because the orbital velocity of the ISS is a bit over 17000 miles per hour and the record speed for throwing a baseball (not in a spacesuit!) is only a shade over 100 mph.

John Rennie already gave the practical answer considering the atmosphere, noting that without doing anything objects near the ISS will deorbit quickly from drag. But that's letting reality get in the way of a good physics problem. I'll show that while a human can't send a ball crashing into the surface in one orbit, they can come close.

How far into the atmosphere does throwing backward get you? According to this tool for the NRLSISE-00 atmosphere model, the density of the atmosphere going from an altitude of $415\ \mathrm{km}$ to $259\ \mathrm{km}$ increases by a factor of about $30$. Thus whatever drag the ISS experiences can be increased quite a bit with just a small change to the orbit. 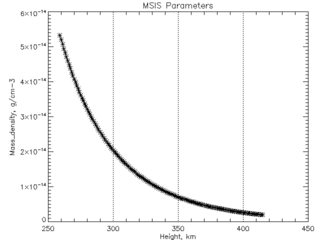 How fast would you need to throw the ball to deorbit it in the absence of an atmosphere? If we throw backward, our old $a = a_0$ will be our new apogee. We want our new perigee to be the altitude $r$. Solving $r_\mathrm{apo,per} = (1 \pm e) a$ for $a$ tells us we want a new semimajor axis of $a = (a_0+r)/2$. Backtracking through $\epsilon = -GM_\oplus/2a$ this tells us what the new energy is and thus what the change in velocity must be (since we can only change kinetic energy with an instantaneous impulse). The answer is $120.\ \mathrm{m/s} = 268\ \mathrm{mph}$. This relatively small number compared to the orbital velocity is a reflection of just how close low-Earth orbit is to the surface compared to the radius of Earth.

On a practical note, there was a space walk a few years back when they replaced a failed ammonia pump that was the size of a refrigerator. The astronaut simply gave it a swift push away from the station knowing that it would soon deorbit fast enough that it wouldn't be a collision hazard.

PS- If you have Kerbal Space Program, this would be a fun thing to test.

Not the answer you're looking for? Browse other questions tagged newtonian-mechanics newtonian-gravity orbital-motion vacuum drag or ask your own question.

0
Will deceleration in a geostationary orbit kick me into a higher orbit?

30
Why does it take so long to get to the ISS?
8
Orbital mechanics and rocketry: Is it ever a good idea to intentionally lower periapsis?
2
What are the steps and energetic requirements for getting from the HST to the ISS?
1
Does a ball spin more from left to right than it does from right to left?
2
Does The Earth appear to orbit the ISS from its point of view?
1
Could a space elevator really be built from the top down?
4
The force of wind on baseball
1
Regarding the objects in free fall in the ISS
0
Could you use a balloon to show the drag from the gas/atmosphere of something orbitting near the ISS?