What effects arises due to hybridisation of phonon branches?

The phonon dispersion is usually given as the vibration frequency on its momentum space. Usually, there are 3 acoustic phonon modes and 3(N-1) optical modes, where 'N' is the number of atoms in the unit cell.

Usually, the optical modes appear at a higher frequency compared to the acoustical modes. However, in some crystals like bulk 2H-WS$_2$ (see figure below, Ref: Chem. Mater., 2014, 26 (22), pp 6628–6637), we observe three optical phonon modes which lies in the low frequency region. It can be seen that these low-lying optical modes are degenerate to the acoustic modes at certain points.

What could be the reason of such hybridisation of phonon branches? What are the probable effects of such phonon dispersion? 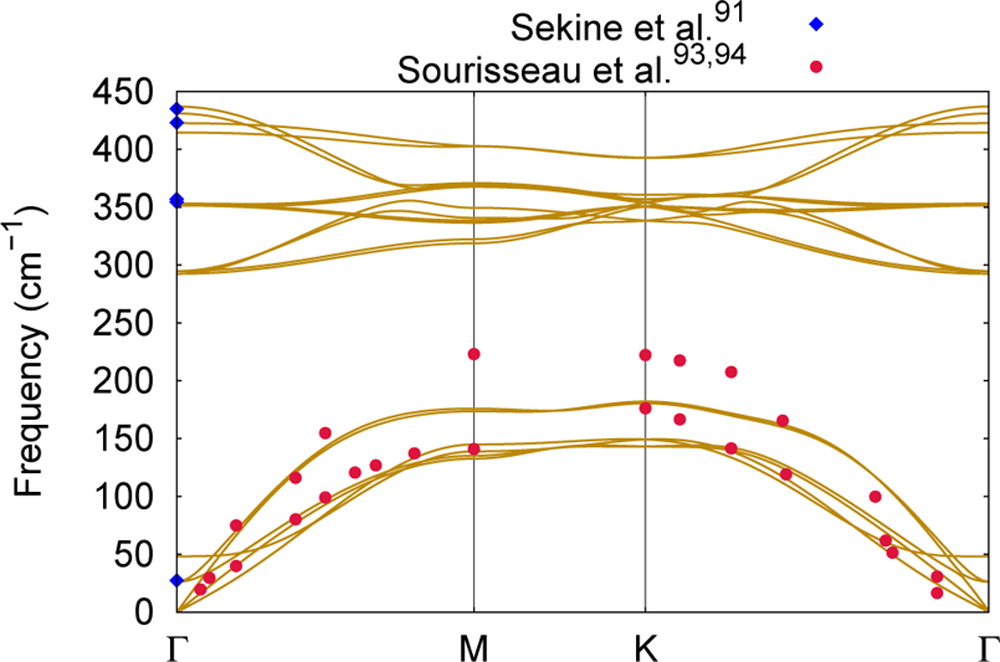 As far as I can tell from the diagram, the modes in question will be completely independent. I can't imagine any physical consequence.

Hybridization occurs when states of compatible symmetry have energies that are identical or close. In such cases, the energy eigenstate will be a linear combination of the individual states. If there are two degenerate states, the eigenstates are the sum of the two and the difference of the two original states. The energies of these hybrid states will differ from the degenerate energy: one will be higher, the other lower. This is called splitting.

This behavior is in exact analogy to that of coupled pendulums. Two identical pendulums (same frequency), will, when coupled, have two frequencies, one higher and one lower than that of the uncoupled pendulums.

In your diagram, the optical and acoustic branches cross indicating that the energies have not split, from which we infer that there was no hybridization. This is almost certainly due to incompatible symmetry.

In band structure diagrams, splitting is manifest by avoided crossings. The branches approach each other as if they are about to cross, but then bend away and do not, in fact, cross. There are examples of avoided crossings in the higher energy optical phonon curves in your diagram, although the complexity of the branches might make them hard to pick out. For example, about 2/3 of the way between $\mathrm{\Gamma}$ and M. Hybridization will have occurred in that area.

Not the answer you're looking for? Browse other questions tagged phonons or ask your own question.

44
What is a phonon?
1
When do optical phonon branches arise?
3
What is a single-phonon?
0
How many types of phonons are there, and what are their characteristics?
2
What is the phonon/lattice interaction?
4
Are acoustic phonons always the lowest energy vibrational modes in solids?
0
Heat capacity due to Phonon Vibrations