Does angular momentum of a system whose moment of inertia is changing remains constant?

In this problem, the moment of inertia of system is increasing. Correct option given is (b) and it is argued that no external torque acts. But If moment of inertia is changing, there should be a torque by $$T= \omega \frac{\mathrm dI}{\mathrm dt}.$$ How can total angular momentum be conserved then? And in such a case total (mechanical) energy should also change.

What I am confused with, I can explain more clearly through another problem: 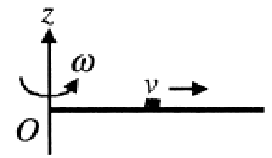 A thin uniform rod, pivoted at $O$, is rotating in the horizontal plane with constant angular speed $\omega$, as shown in the figure. At time $t = 0$, a small insect starts from $O$ and moves with constant speed $v$ with respect to the rod towards the other end. It reaches the end of the rod at $t = T$ and stops. The angular speed of the system remains $\omega$ throughout. The magnitude of the torque ($\lvert\vec\tau\rvert$) on the system about $O$, as a function of time is best represented by which plot? 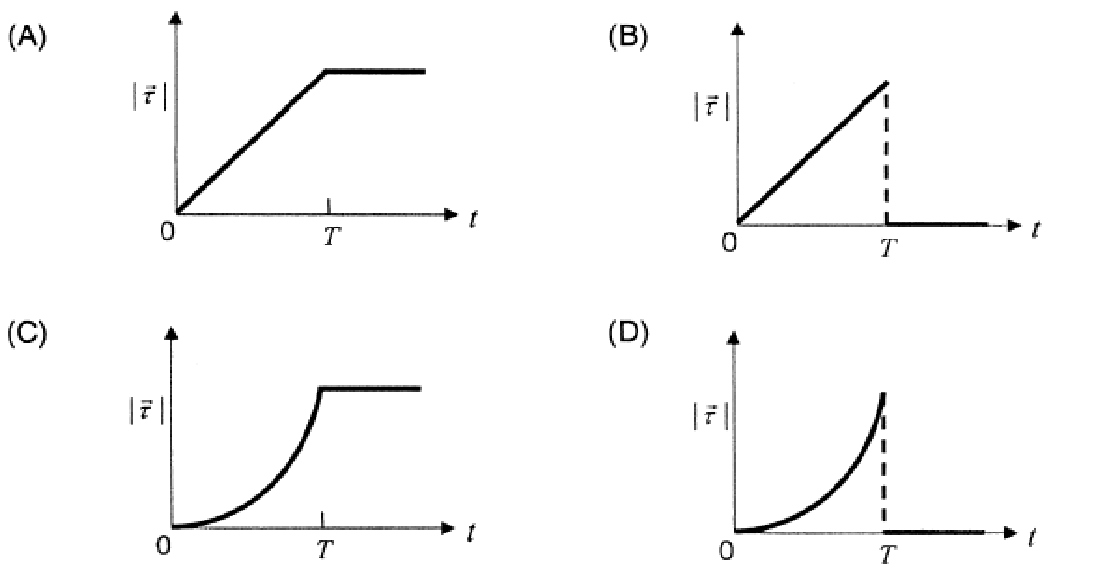 Here too there is no external torque (considering the insect + rod as a system all forces exerted by the insect are internal). Yet there is a net torque on the system. So how are the two cases different?

The principle of conservation of angular momentum says that angular momentum remains conserved unless an external torque acts on it. The net torque on a body is defined as: $$\vec{\tau\,}=\dfrac{\mathrm d\vec{L\,}}{\mathrm dt}$$ We can clearly see from this definition that since external torque on the body is zero, the angular momentum is going to remain constant. But the angular velocity is not, and that is what which changes with change in angular momentum, because: $$\vec{L\,} = I\vec{\omega\,}$$ For example, ice skaters when have their arms outstretched, their moment of inertia is high and so angular velocity is low, but if they draw in their arms, their moment of inertia decreases and correspondingly, without any external torque, their angular speed increases!

The revision to your question has made it further interesting. Imagine that the rod is connected to a motor. Now, once the insect starts crawling towards the end, the moment of inertia of the entire system increases. According to our equations, the angular speed of the system should correspondingly decrease. But, we are told that it remains a constant $\omega$. This means that the motor has continuously apply a torque to keep the angular velocity constant! This is the external torque that we have find in the question, and it is responsible for the increasing angular momentum as well as kinetic energy of the system.

In the first case, there was no constraint keeping the angular velocity constant, unlike your second question.

In general, the change in angular momentum resulting from a change in moment of inertia depends on how the change is implemented, and to some extent your perspective. In physics, you can think of global conservation laws as constraints that feed into your interpretation of a system.

Now suppose that you tell me that the mass of the projectile is changing, and that the change in mass is accompanied by a change in linear momentum. However, for some reason you cannot see little pieces of matter flying off or toward the projectile. From a scientific perspective, this would be very exciting, because you would have discovered some new type of particle that you can characterize through its effect on the projectile. Hence, in this circumstance we would augment the description of the physical system to account for any measured change in momentum. For example, colliding electrons naively behave in a way that contradicts momentum conservation. We account for this with the electromagnetic field, consisting of photon particles, that carry away the missing momentum.

Not the answer you're looking for? Browse other questions tagged homework-and-exercises newtonian-mechanics angular-momentum rotational-dynamics moment-of-inertia or ask your own question.