Two Robertson-Walker observers, at what time will a light signal be received?

Here is a question I have that is inspired by this question here.

Although the radiation-dominated (RD) era is long in comparison to the matter-dominated (MD) and $\Lambda$-dominated ($\Lambda$D) eras, it is nice to have an answer which can be adapted easily for any cosmological era. If we assume that the Universe is permeated by a perfect fluid we may use the equation of state

where $P$ is the pressure and $\rho$ the energy density. The two Friedmann equations (or the conservation of the stress-energy tensor $\nabla_{\mu} T^{\mu \nu}=0$) give us

where $a_0$ is the scale factor today (and we will set $a_0 = 1$ from now on) and $\rho_0$ is the total energy density of the Universe today. Plugging this back into the first Friedmann equation then gives $a(t)$ as

Now we consider the photon. As in my answer here, the photon follows a radial geodesic in FRW spacetime. In a flat Universe as you specified, we have

for a photon. We can define an origin $(0,0,0)$ and from there send a photon to any point at radial distance $r = x$. You specified $(x,0,0)$ but as the Universe is homogeneous and isotropic, any such point will yield the same answer. Using the photon line element, this is

with the previously-stated value of $A$.

so given an infinite amount of time, we can send a signal out to infinity.

This means that as the Universe grows in the dark-energy regime, its expansion accelerates such that the region over which we can communicate shrinks! If we send out a photon now, the maximum distance it can reach in an infinite time will be greater than if we send out a photon tomorrow. This is the phenomenon of the shrinking Hubble sphere and it means that if the Universe continues to be dominated by dark energy as it is now, then the observable Universe will shrink until we can see only the closest astronomical objects.

In the geometrical optics approximation light ray is represented by a null geodesic. Therefore you only need to find a null geodesic connecting points $(t_0,0,0,0)$ and $(t_1,x,0,0)$ for some $t_1$ (and this condition will determine $t_1$ uniquely). This is probably quite easy to do directly in this case, but in general for investigation of null curves in FLRW spacetime conformal time defined by $\mathrm d \eta = \frac{\mathrm d T}{a(T)}$ (with $a(T)=T^{1/2}$ in your case) is especially convenient.

Therefore you need to calculate the future light cone

with H as the Hubble parameter

If you neglect the radiation density you can use

which simplifies the equation a little bit and gives good approximations if you don't go too far back in time , but the light cone will still be an integral with no explicit inverse function.

This leads to a numerical computation with no analytical solution. The exact computation is a little long if one takes matter, dark energy and radiation into account, so forgive that I won't translate everything into Latex. 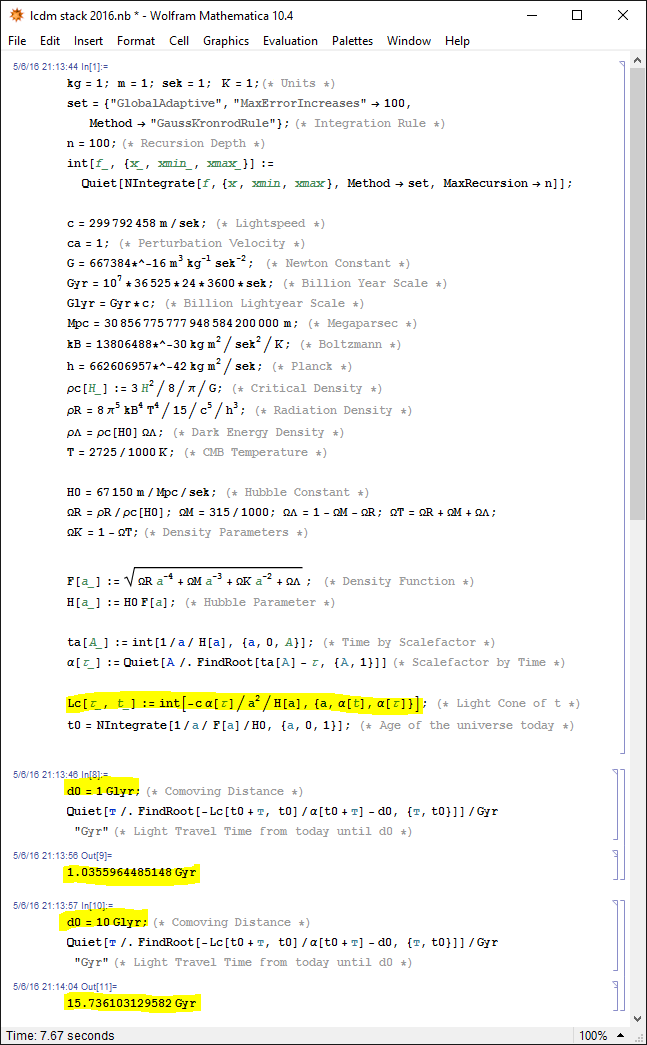 Since the Hubble parameter is evolving with time it not only depends on the distance but also on the time when the photon is emitted.

Unfortunately this all has to be solved numerically, so I can't give you an explicit solution for $t_1(LC_{comoving})$, but at least I can show you how to solve for that solution with a computer.

I hope this helps nevertheless, if something is unclear with the code feel free to ask. Maybe it also helps to see the spacetime diagrams here and here.

Not the answer you're looking for? Browse other questions tagged homework-and-exercises general-relativity cosmology differential-geometry metric-tensor or ask your own question.

4
Two “Robertson-Walker observers,” velocity of baseball as seen by second observer right before it's caught?
2
Measuring the growth of the Hubble sphere

4
Two “Robertson-Walker observers,” velocity of baseball as seen by second observer right before it's caught?
2
Age of universe from Hubble's constant
2
How does proper distance relate to the Robertson-Walker metric?
1
Flat Roberston-Walker metric particle geodescics
0
Time-dependent and space-dependent metric: possible combinations
0
Time dilation formula vs Lorentz Transformation with light signal
1
What's the redshift of a return signal in a flat universe between two observers?