Why does internal resistance increase as current decreases?

Our class conducted and experiment to investigate internal resistance and terminal pd, using a cell, fixed resistor and variable resistor. The results were as follows:

When plotting a graph of terminal pd(y) against current(x), a linear relationship was shown: as current increased terminal pd decreased.

The gradient gives the (-)internal resistance, which was constant.

My physics teacher also has no idea why this is happening, so any help would be greatly appreciated. ![Graph ]1 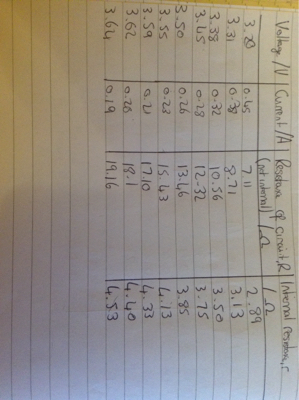 Your line of best fit gives an average internal resistance r based on all measurements. If data points do not lie exactly on this line then the value of r calculated for individual data points (measured pairs of V and I) will not be exactly the same as the slope of the line of best fit.

If you have drawn the line correctly some points will be above the line and some below, with about as many each side, and with the above and below points distributed randomly.

However, it sounds as though there is a consistent trend in your data points : eg all 'below' points at low current and all 'above' points at high current. This suggests that internal resistance was not in fact constant, within the limitations of experimental error. You do not say how big an effect this is : if small, you may be able to ignore it.

EMF and r should be measured when the current drawn is very small, ideally 0. Possibly you have taken readings at a high current, or you have taken a long time to take them. This can have two effects : (i) depleting the battery, reducing EMF, and (ii) increasing r because the battery is warming up and this increases internal resistance.

Your observation that internal resistance increased as current decreased suggests to me that you may have started readings with a high current then worked down to low current.

You will need to decide for yourself what went wrong, perhaps after consulting your teacher again and explaining how you took the readings.

It is not generally realised that "internal resistance" is a myth which cam be evaluated only by practical experiment and calculation using Thevenin's theorem. But that does not mean that it is a useless concept. Indeed it is essential for design in ALL branches of engineering.

For example a plumber measures the efficincy of a water-supply by measuring the water-pessure with the delivery pipe blocked (tap turned off - the static- pressure) and then with the water freely flowing (tap fully open - the dynamic pressure). These two measurements yield (by calculation) the losses from friction between the water and the inside surface of that delivery system (i.e. the internal-resistance of that water system).

To understand the problem set out here it is essential to get to grips with the dual concepts of Thevenin's theorem (measure pressure - voltage ) and Norton's theorem (measure current - amperes). In the eletrical world these correspond to high-impedance and to low-impedance circuits. Ken Green

1
Current against the inverse of resistance graph, $I = V/R +c$
0
What does a positive gradient on a graph of V plotted against I mean in terms of EMF and internal resistance?
3
The shape of the graph of the equation: $V= -r I + E$
4
Emf of a Cell in an Open Circuit
0
Emf Independent of External and Internal Resistance
0
Resistance in internal battery, voltage source
0
Ohm's Law Complications
0
When the external resistor increases in temperature, why is the calculated value for internal resistance higher?
2
Internal resistance and Instantaneous current?
1
Does the resistance in the secondary circuit of a potentiometer circuit affect the balance length?