Why an object with double length have the same friction? [closed] 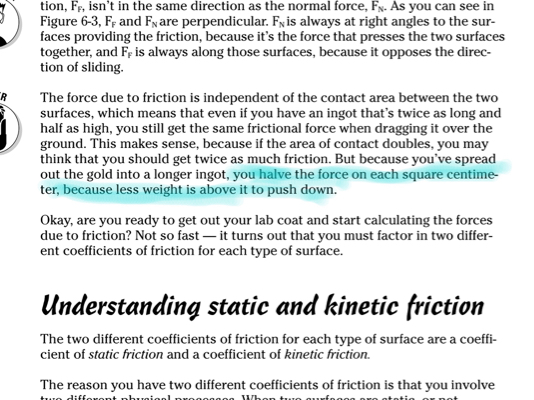 I didn't really got the highlighted part.

The force of friction is defined as $F_f = \mu N$, where $N$ is the normal force. In the case of a flat surface free of external forces, you can use Newton's laws to determine that $N = mg$, where $m$ is the mass of the object. Notice that we have made no reference to the objects size, or area of contact. This is because in these examples we have essentially approximated the object as a point particle, and the forces as being applied to the objects center of mass. Probably not enough to convince you however.

Here is an illustration. Let's suppose we have a block of mass $m$. We can treat the frictional force then as $F_f = \mu mg$. Now lets say we cut that block in half, horizontally and then set the halves next to each other. The frictional force on each half is now $F_{f,half} = \mu mg/2$ (since each half weighs half as much). Now pretend we've magically welded the two halves together, so as they are now the same object. The frictional force should be the sum of the force on the two halves (since they move together), and will be $2F_{f, half} = F_f$. As you can see, subdividing the object and spreading it out has no effect on the total friction, since we are also decreasing the mass of each subdivision, which decreases the normal force, which decreases the friction of the subdivision.

We can continue with the above procedure, in effect, spreading out the object down until they are atoms (effectively point particles), yet the friction will remain the same.

Not the answer you're looking for? Browse other questions tagged newtonian-mechanics classical-mechanics forces pressure friction or ask your own question.

1
How does static friction increase with increase in the applied force?
7
Why is friction force negative in ice skater problem?
7
Why do icebergs move perpendicular to the wind?
3
Why should the same friction $f$ act throughout the part of pulley where the string touches it?
0
Is kinetic friction still constant at the transition from static to kinetic friction?
0
Why doesn't an object with less density than a fluid float 100% above the fluid level?
1
Why does Friction not accelerate the body in this case?