Calculating the diameter of Jupiter through an image 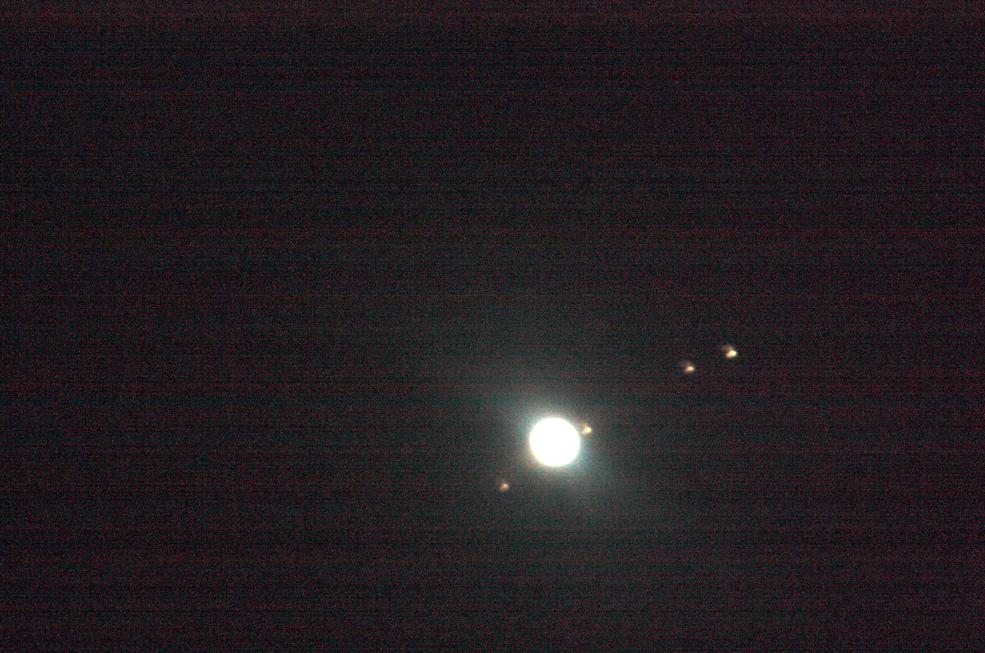 I took an image of Jupiter through my 8" Dobsonian Telescope, attaching a DSLR and a 1.25" Barlow Lens where the eyepiece goes, as shown in this video: https://www.youtube.com/watch?v=reFxoF3XoaU

Through numerous online sources, I learnt that to find the angle of view of my image, the magnification of my image needed to be calculated, and that this value along with the given field view for my eyepiece.

The above website answers the following question, the calculations of which I attempted to mimic.

My first telescope was a Meade 6600 -- they don't make it any more -- it's a 6-inch f/5 Newtonian scope. It came with a 25mm eyepiece. So... what was the magnification I was getting with this scope?

Here are the calculations I did in hopes of getting the above result:

As shown in the video (the first link above), I didn't use an eyepiece to take my picture - I used a barlow lens, a couple of adapters, and a DSLR. So at this point, I am not sure what value to use for the "focal length of the eyepiece." How can I proceed to calculate the magnification?

The magnification of your set up with the telescope objective acting as the lens of your camera is given by:

When you use a Barlow lens you effective increase the focal length of your objective and the most usual increase is $\times 2$.
So the magnification would be increased by a factor of two.

For the angle of view you need to know the size of the sensor in your camera. The 50 mm focal length lens quoted above as a reference assumed a 35 mm film camera but for other than the most expensive SLR cameras the sensor is less than 35 mm by a factor of at least 1.6 and so you have to make a comparison with a camera of focal length $1.6 \times 50 = 80$ mm to find the magnification.

With your set up you can work out the angle of view if you know the effective focal length of your telescope with the Barlow lens $f_{+B}$ and the size of your sensor $d$.
Then measurements using your image of Jupiter and its moon will give you the angualar size of Jupiter.

Perhaps it might be better to work "backwards" and take a photograph of two objects whose angular separation is known and so calibrate your setup?

Not the answer you're looking for? Browse other questions tagged homework-and-exercises optics astronomy lenses telescopes or ask your own question.