How is 6W equivalent to 40W, as claimed by adverts for LED light bulbs?

Every advert I come across for LED bulbs advertise them as the equivalent of a higher W incandescent bulbs.

This makes no sense to me, if the room requires 40W to lighten it up then it'll always require 40W of energy. How is it possible for 6W of energy to do the job? What am I missing here?

energy visible-light everyday-life
Share
Improve this question
edited May 2, 2016 at 0:19

A 40W incandescent light bulb has a luminous efficiency of 1.9%. That means only 1.9%, or 0.76W, of the energy consumed by the bulb ends up as visible light.

The claim that a 6W LED bulb produces as much light as a 40W incandescent bulb requires the efficiency of the LED bulb to be 12.7%, which is well within the range of efficiencies that LED bulbs can achieve.

The advertising suggests that the new 6W bulb generates as much light as a 40W incandescent light used to. Most of the energy in an incandescent light bulb is converted into infrared radiation that we can't see or it's at the red end of the spectrum where the human eye is not very sensitive. This

is a typical incandescent spectrum and you can see how little of the emissions fall into the visible. All the power outside of the narrow visible band is wasted.

In comparison, a modern LED lamp contains a blue emitter chip and a yellowish phosphor, the spectral contributions of both can be seen here: 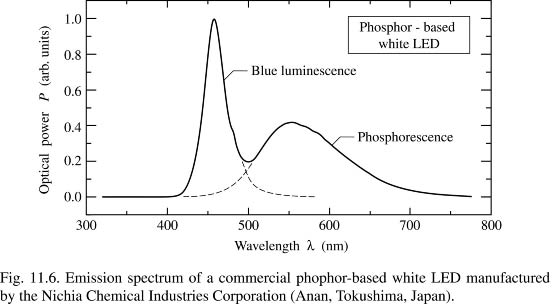 Please note that the emissions in this graph only cover the visible waveband, which is not the entire physical truth, of course, the graph is just cutting out the emissions in the deep infrared due to the low temperature heat that the bulb is still emitting. Despite this omissions, the total conversion efficiency of electrical energy to visible light is still much higher than that of the incandescent light.

Having said all of that, some of the practical results with this kind of advertising will be disappointing. For one thing the industry has a bad habit of over-speccing their products (that is also the case for the incandescents!), for another, the radiation patterns of many of these lights are different and they may produce brighter light in one area but then fail to illuminate the entire room. I would expect to put, at least, 50% more "equivalent" lighting power in with the new lights than with incandescents to get similar results. That is still a significant energy savings. If you can trade 9W of LED lights for 40W of incandescents, that's savings of roughly 75%.

According to the advert you posted, that LED bulb consumes 6W (power) to get a luminous flux of 500 lumens (lumen is a photometric unit, like candela or lux): https://en.wikipedia.org/wiki/Luminous_flux

On the other hand, an incandescent bulb would need to consume 40W (power) to get the same luminous flux.

That is what the advert is telling you. You don't "need" 40W to lighten up a room, that is the power you invest to get the light. LED bulbs have a better return of investment because they are based in a completely different physical phenomenon (incandescence vs. photoelectrical effect).

EDIT: Of course, as CuriousOne pointed out, the advert is probably overstating the advantages of the product. That is what they do, after all.

Not the answer you're looking for? Browse other questions tagged energy visible-light everyday-life or ask your own question.

7
What is the best way to collimate light emitted by a LED?
2
Light bulbs flashing on when disconnected
25
trouble reconciling doppler shift for energy and momentum of light
1
Does the existence of matter and energy in the universe violate the second law of thermodynamics?
0
Deriving photon energy equation using $E = mc^2$ and de Broglie wavelength
1
Thermodynamics presents problem for origin of life? (Free Energy increases don't happen naturally?)