In my programming project I calculate the minimal energy of an atom with 2 electrons in the $L=0, S=0$ state, using a Hylleraas wave function.

Here a.u. are the atomic units in which the energy of the hydrogen atom is $-0.5$. However, the next part of the project is to find a lower limit for $Z$, e.i. imagine a theoretical ion with $0<Z<1$ $(Z\in \mathbb{R})$, what is the minimal value for $Z$ in order for the two-electron system to remain bound? This is equivalent with asking: for which value of $Z$ is $E_0=0$?

I cannot find any references about this theoretical lower limit online, but I don't think my results are correct: the $E(Z)$ relation, also shown in the graphs below, looks like a power law. This means that $E_0\to0$ for $Z\to0$, but in this case you just have two electrons and you would expect a very positive energy as the two will strongly repel each other.

I do not expect you to help me with the programming project, but maybe someone could provide some useful thoughts or a reference about this theoretical lower limit? I keep finding it strange that the results for $Z=1,2$ are correct with errors of only 0.01% and everything seems to go wrong for small $Z$. 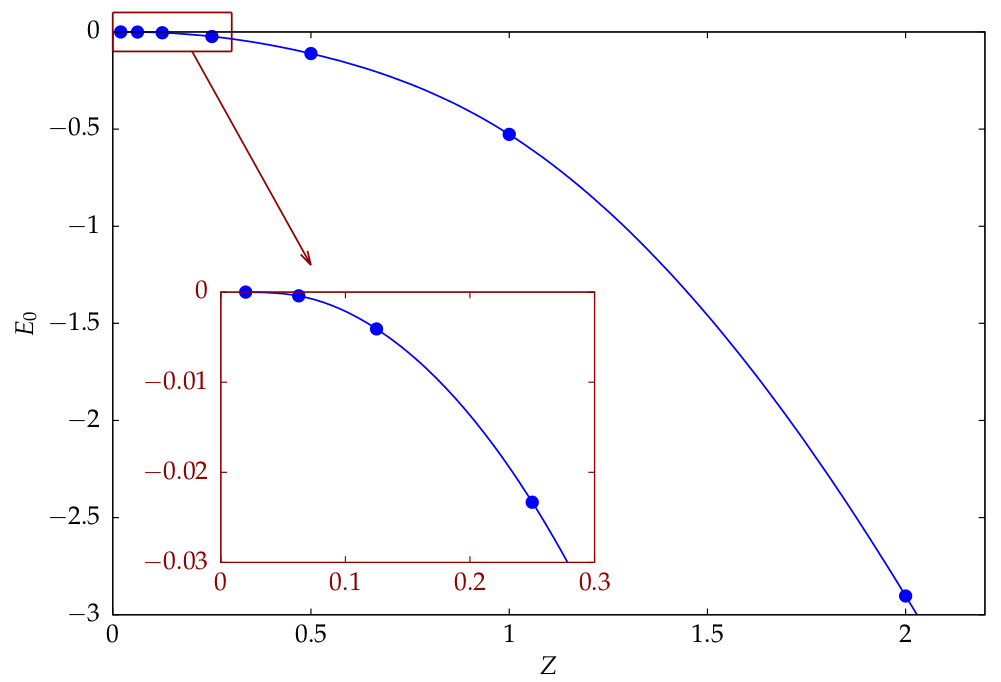 UPDATE: It is interesting to plot the evolution of the coordinate rescaling factor $\alpha$ as a function of $Z$. Apparently, there is a discontinuity around $Z\approx 0.89841$, which is close to the critical value of $Z\approx 0.91$ found in literature. I would suppose this point has a significant meaning, but I have failed so far to give it a physical interpretation (I hope to find an interpretation which has to do with the ionization of at least 1 electron). 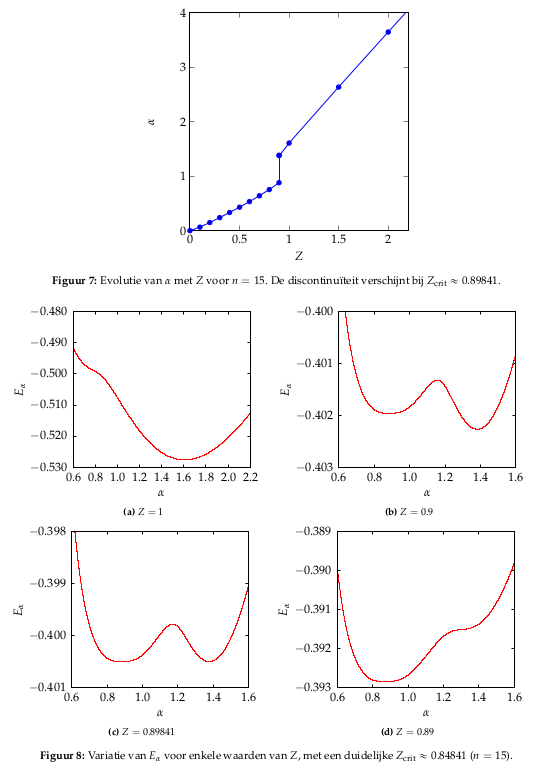 I've used the MCHF Atomic Structure Package by Charlotte Froese Fischer and others to calculate the two-electron ground state energy for Z≤2. The solutions have more variational degrees of freedom than the Hylleraas-type solutions, and are with sufficient radial grid points and angular momentum channels in principle numerically exact for two-electron systems.

With decreasing Z<1, these self-consistent multi-configuration Hartree-Fock calculations become harder and harder to converge. The error bars in the plot below indicate an error estimate based on averaging of energies for a range of values [Z-0.025,Z+0.025].

Capturing more of the (always negative) correlation energy due to more variational degrees of freedom in the solution, the MCHF code seems to find bound solutions down to basically Z=0.8. Due to the error bars, an exact critical value for $Z$ cannot be determined from these results. With the given resolution or total energy accuracy for smaller Z, there doesn't seem to be any discontinuity in the energy range considered.

All to be taken with a grain of salt due to the self-consistency convergence problems for $Z$<1. 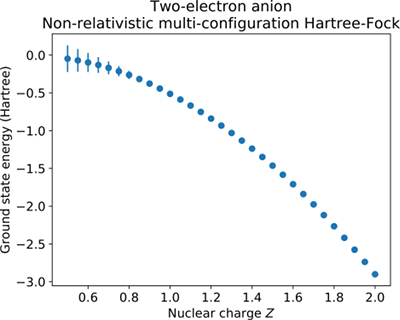 Since one electron will always bind to the nucleus with an energy of $-Z/2$ Atomic units, looking for the zero of energy is not correct. You want to locate the charge where only one electron binds. At this point, the other electron will be far away, and the correct ground state wave function will look like $\psi_0(r_1)+\psi_0(r_2)$, with $\psi_0(r)$ the single electron hydrogen like ground state with charge Z. This form, is of course quite different from your form, but you can see that your code is trying to change $\alpha$ to get closer.

Not the answer you're looking for? Browse other questions tagged wavefunction variational-principle ground-state or ask your own question.