What happens to the electric field at the boundary of a dielectric?

The question in the title is a broader one, but for now, I want to confine myself to the following problem.

I have the task to find the potential difference between points A and B shown in the diagram. 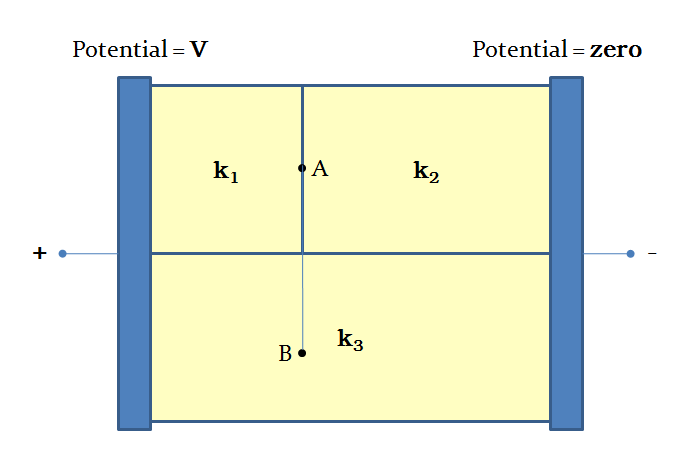 But, if we calculate the integral $\displaystyle V_{AB}=-\int_B^A\vec{E\,}\cdot\mathrm d\vec{r\,}$, then we get potential difference to be zero! Why does this integral not give the actual potential difference between the two points? I suspect this is due to something wierd happening to the field at the boundary of $k_3$ slab and the $k_1$ and $k_2$ slabs.

I think the answer is clearer if you consider the equipotential as shown in the diagram below. Forgive their straight line nature as they were easier to draw that way. 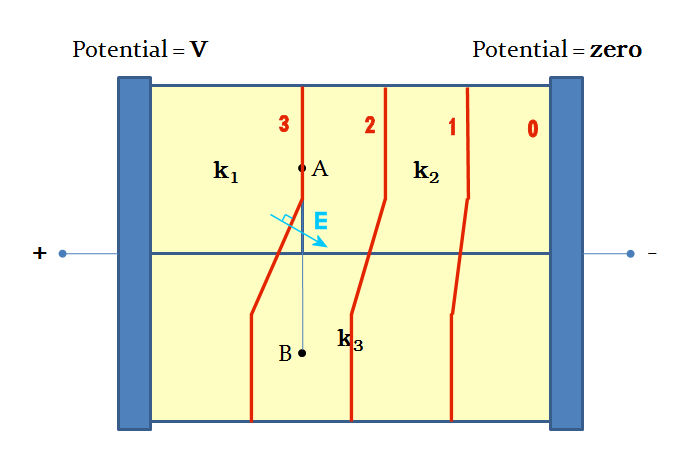 Given that $\vec E$ must be perpendicular to an equipotential surface then in your computation of potential difference $\displaystyle V_{AB}=-\int_B^A\vec{E\,}\cdot\mathrm d\vec{r\,}$ the value of $\vec E \cdot d\vec r$ is not zero along the whole path.

Later:
I am sure that the potential and hence the electric field pattern can be computed numerically but as I do not have the facility to do that consideration of a simpler arrangement which might help understand what is going on.

Consider a pair of parallel plates area $2A$, separation $d$ with a potential difference of $V$ between them. Between the plates there is air (relative permittivity $\epsilon_r = 1$) and a dielectric ($\epsilon_r = 2$) of thickness $\frac d 2$ and area $A$ as shown in the diagram left-hand below in which the induced charges on the dielectric are not shown.

With the potential difference across the two capacitors $V$ the same then if the charge on the air only capacitor is $3q$ then the charge of the mixed dielectric capacitor is $4q$.
This results in different net electric field $E_n$ within the capacitors.

I then thought of another “simple” arrangement where the dielectric in the left-hand diagram is replaced by a conductor to give the situation shown in the right-hand diagram.
Again two capacitors charged so that the potential difference across the plates is $V$ and then joined together.
Again some of the negative charge $-2q$ will move down the right-hand plate and also there will probably a concentration of charge near the corner $Z$ and a deficit of charges around corner $Y$?

Boundary conditions of electromagnetic waves are well looked into because of the nature between polarization and reflection. However in this particular case it is rather simple, it is the evaluation of a contour integral over the boundary. This is done by summing the length elements of the pill-box shape that is typically used in this analysis in the correct +/- convention. 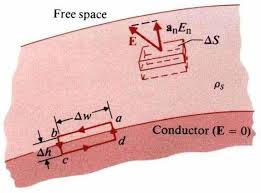 Not the answer you're looking for? Browse other questions tagged electric-fields potential capacitance dielectric or ask your own question.

9
Charge distribution on a plate of Capacitor with Dielectrics .
0
What is the correct way to take out equivalent capacitance here?
0
Boundary conditions in dielectric problems
1
Calculating the Electric field in the capacitor
0
Coaxial cable with compound dielectric
0
Potenial difference from electric field and line integral
0
Why does potential decrease when a dielectric is introduced?
1
CombinationsDielectrics in parallel
0
Change in potential energy of a parallel plate capacitor as a dielectric slab is moved in the space between plates
1
Dielectric above and below the xy plane