Rope waves with a twist 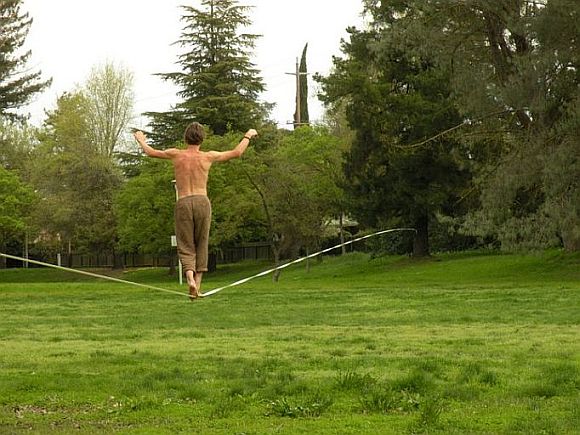 In the picture you see a person walking a slackline. A slackline is a tensioned flatband of polyester. Typical tensions are between 1 kN to 15 kN depending on the length of the line. The lines are very thin (about 1 mm - 2 mm I would say), but the width is usually an inch (2.5 cm). There are other materials than polyester in use, but the properties are very similar. Under the high tension the lines are very "bouncy", so they stretch a lot and have relatively high efficiency in returning the bounce energy.

My question is about the oscillations you can see on the rope. For simplicity let us assume that no person is walking on the line, the oscillations still appear then, I just couldn't find a better photo.

The oscillations are cause by the wind. There are two kinds, transverse waves and rotational/twist waves which are visible since the cross-section of the line is not circularly symmetric. I know that the driving force for the transverse waves can be explained by a Kármán vortex street (see also this question and answer about the Tacoma bridge). I was wondering how that relates to the driving force for the rotational waves?

I'm having a problem visualizing the transverse waves with 3 or 4 nodes you mention. All videos I've found show standing waves with only two nodes, the slackline moving up and down between the anchor points (or between an anchor point and the person walking the slackline). The rotation waves I saw (maybe torsion oscillation is a better name) also had only two nodes. The "nodes" in the picture aren't actual nodes, they are points where the twist angle corresponds to the viewing angle. If the middle of the line makes (a bit more than) seven complete rotations, you'll have 14 positions on the left and on the right where the rotation is a multiple of 180 degrees, giving you 28 visual points. Their number indicates the amplitude of the torsional oscillation rather than the number of nodes.

As far as I can see, the number of nodes and therefor the wavelengths (for standing wave and torsional oscillation) are equal; the same is true for their frequencies: In the video 50 Meter Slackline im Wind, I count 10 full periods in 4.29 seconds for both the vertical and torsional oscillation. The movement of the clouds indicates that the wind is coming from the right, and the line moves upward when it rotates counter clockwise, downward when rotating clockwise, which suggests that the vertical oscillation may be caused by the Magnus effect.

Whether or not the vertical movement (the bending of the line) causes the torsional rotation, or whether the rotation amplifies itself, I'm not sure, but there clearly is positive feedback: "Skybow" kites are based on the phenomenon, these are basically long narrow ribbons attached to swivels, freely rotating (reaching speeds of more than 10000 rpm). The original ones are flat symmetric ribbons that will turn in either direction, so their rotation is not based on a design feature (like a curved surface). See the blog by one of the designers for more.

Ignoring the rigidity component , this becomes: $$ f=\frac{1}{2L}\sqrt{\frac{T}{\mu}} $$ Which is identical to the frequency for a standing wave (fundamental harmonic) in a string of length L, showing that the frequencies are indeed the same.

Not the answer you're looking for? Browse other questions tagged waves oscillators string or ask your own question.

7
The demise of the Tacoma Narrows bridge was casused by aeroelastic flutter. But isn't that just a special case of resonance?

0
Behavior of shock waves at relativistic speeds
2
Analysis of motion of a body moving on a string?
8
How can radiation be a transverse wave? Does light really resemble a rope? How can a 3D field be a medium for non-spatial 1D waves? Need mental model
4
Is the wobbly rope depiction of a radio wave inherently wrong? And how do vectors of parallel waves align with each other?
5
Tension in a vibrating loop
1
Standing waves due to two counter-propagating travelling waves of different amplitude
0
Destructive and interference waves with different waves
0
Can a gust of wind have a distinct blade-like edge?