The moon is in tidal lock with the earth, but a long time ago it was not. As the moon became tidally locked with the earth, its angular momentum changed and the delta went into it's orbit and possibly the rotation of the earth.

Tidal locking can also lock the central body, which would cause the earth to rotate once per lunar orbit. While this is not the case in the earth/moon system, this does happen when the two bodies have comparable mass and enough time has passed.

Now the tidal forces cause a deformation of the central body, so it is not a perfect sphere and it could indeed affect the orbit of its satellite.

However, the deformation would depend on the central body's rigidness. The deformation also causes the central body to loose rotational energy and this is often claimed to be the cause of tidal locking. However, a perfectly elastic body would not loose any energy due to its deformation, it would not become tidally locked (if that "brake" explanation is correct) but its gravitational influence on its satellite's orbit would still exist. So it is hard to believe that the distortion of the symmetry of its gravitational field changes the satellite's orbit.

I am certain that mathematical analysis of tidal locking has been done many times but I have failed to find such an analysis where the mechanism for the transfer of angular momentum to spin angular momentum is included which is the question which has been asked. Perhaps someone is able to produce a reference or an analysis?

Having experienced on a number of occasions how counter-intuitive rotational dynamics can be I will not be surprised to find that my answer is flawed.

Diagram $(1)$ (adapted from the diagram in Wikipedia article "Tidal force") has the Earth somewhere below the diagram and shows the Earth's gravity differential field at the surface of the Moon which causes the Moon to change its shape.
Under the influence of these differential forces the Moon changes its shape to something like the greatly exaggerated green ellipsoid shown in diagram $(2)$.
There is no net torque on the Moon due to the Earth and so its period of revolution about its axis stays the same. 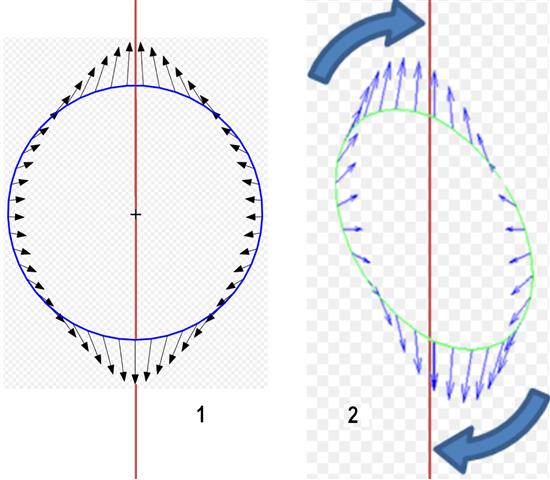 Both Wikipedia articles are very informative.

The question is, "Where is the force that increases the orbital angular momentum?"

I think that the answer to the original question is, the force $F$ in diagram $(5)$?

The diagrams I have drawn are gross exaggerations of what actually happens. Any smaller and the force $F$ would be difficult to identify. I have also only considered a situation where all the mass is distributed in a plane and ignored any angular momentum components which are not perpendicular to that plane. 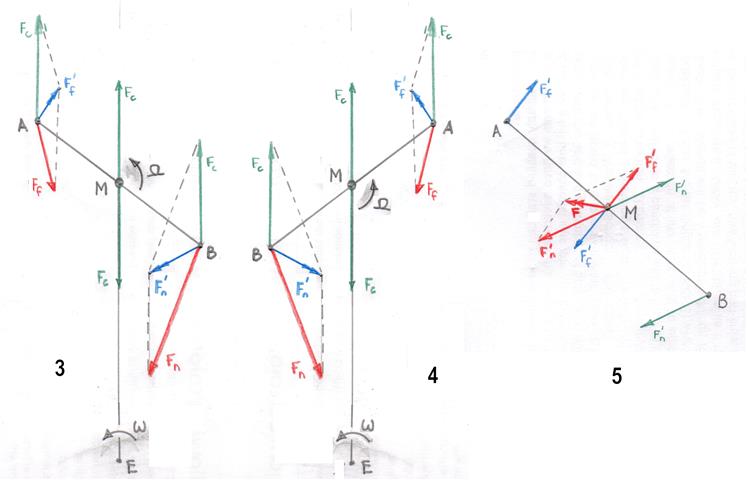 The differential forces acting on the particles at $A$ and $B$ are $F_f^\prime$ and $F_f^\prime$.
The diagram shows that these forces, which are responsible for reducing the spin angular momentum of the Moon, are not parallel to one another nor do they have the same magnitude.
Hence there is also a net force $F$ which acts at the centre of mass of the Moon.

Diagram $(4)$ illustrate the fact that for a body which is symmetrical about the $EM$ axis there is no torque.
If there is asymmetry about the axis $EM$ as in diagram $(2)$ then tidal locking is possible.

If there is energy transfer between bodies, I believe it would be vastly insignificant compared to the heat dissipation, that is the real responsible for tidal lockings. When moon was spinning relative to Earth, its core was liquid, and most angular momentum energy was lost as heat due to viscous dissipation, keeping the core liquid as long as it was spinning relative to Earth.

Same thing with Earth, the angular momentum it looses due to Moon's tidal forces makes the heat that helps to keep the core liquid.

16
Tidal Lock Radius in Habitable Zones
3
Tidal acceleration for a retrograde rotation?
7
Stability of moons around tidally locked exoplanets
8
Does a tidally locked planet have seasons?
1
Energy in orbit of satellites around the earth lost?
2
Tidal locking of a planet to a satellite
1
Would a celestial body in a horseshoe orbit be tidally locked to the planet?
2
Definition of "tidal forces"
3
Can tidal locking increase rotational kinetic energy? Where does the energy come from then?
1
Will a satellite orbiting the moon have a tidal locked orbit?