I'm teaching myself some basics of the ideal gas law and working out simple density equations for atmospheric gases at various altitudes.

When I applied the gas law to Venus' atmosphere at its surface,

But I'm curious (and here's my question): With all the discussion on the Wikipedia pages cited above about how Venus' atmosphere is a supercritical fluid at its surface, does the ideal gas law equation still work in this exercise?

The ideal gas law assumes that there are no forces between molecules of a gas, and that the size of the molecules is negligible compared to the volume of the gas.

When a gas becomes a liquid, these assumptions are clearly violated; and when it becomes supercritical, the density is typically still such that the second assumption is almost certainly not valid (although the molecules will have such momentum that the intermolecular forces no longer hold them together).

Therefore I am pretty sure a supercritical fluid does not meet the definition of a (near) ideal gas. If you get the "right" answer, you were lucky. For reference, here is the phase diagram: 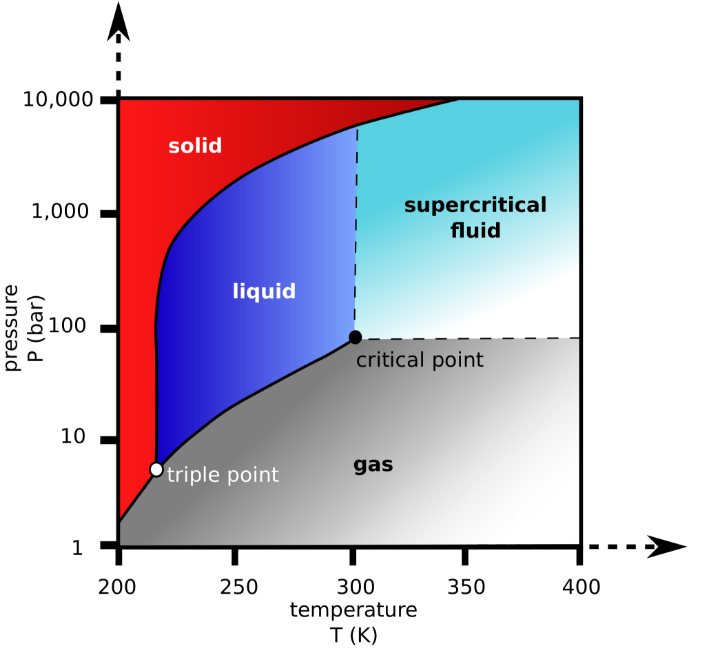 Obviously, at the surface of Venus you are way beyond the critical point in temperature... but the density seems kind of high for an ideal gas that was liquid at a little less than half that temperature.

Afterthought: if the supercritical fluid still behaves like a nearly-ideal gas, the partial volume occupied by the molecules must be relatively small. Yet, the density of the liquid is about 1.5 g/cc; with a molar mass of 44 g, that is about $2\cdot 10^{22}$ molecules per cc. That puts the volume per molecule at $5\cdot10^{-29}~\rm{m^3}$, which would correspond to a sphere with a radius of $0.23 \rm{nm}$. According to this answer, the size of a CO2 molecule is about 232 pm (from center of O to center of O). That suggests that they are quite tightly packed at that density, and it leaves me baffled as to why it should still be so compressible. Something to ponder...

After further research, I've concluded that the ideal gas law would work for Venus' supercritical fluid atmosphere, at least reasonably well enough for my curiosity, and certainly as well as it would here on Earth.

My research took me to learning compressibility factor, equations of state, and several other real gas topics.

From what I gather, a gas behaving "ideally" will have a compressibility factor $Z = \frac{P}{nRT}$ of one. While the Wikipedia page mentions that $Z$ will deviate substantially for a gas at extreme pressures, such deviation doesn't become significant until several hundred bars of pressure (more than Venus' surface).

This web page has an online calculator of various physical properties of several gases (sorry, it's an HTTP POST so no direct URL to the calculated data), and it shows the compressibility factor is still near 1 for both gases, even at 93 bar and 735K (1.0048 for $CO_2$ and 1.0391 for $N_2$).

Not the answer you're looking for? Browse other questions tagged atmospheric-science ideal-gas or ask your own question.

1
What's the size of carbon dioxide?

1
Difference in vertical stratification of partial pressure due to gravity
2
Partial Pressure - Which solution is right?
1
Why Earth's atmosphere behaves like an ideal gas?
4
Is the atmospheric pressure the cause of a planet's surface temperature or is it the temperature the cause of a planet's atmospheric pressure?
0
Deriving the Ideal Gas Equation
0
Ideal Gas and Thermodynamics
0
Nebulas and Ideal Gas Equation confusion
6
Shouldn't $CO_2$ forcing depend on the surface temperature?